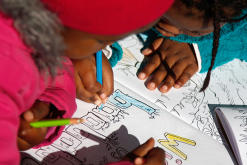 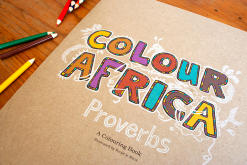 Colour Africa Proverbs presents words of wisdom from around the continent in a fun and educational way.
(Images: Colour Africa)

RELATED ARTICLES
• Instilling a love of reading
• Gift that keeps on giving
• Getting needy kids hooked on books
• E-classroom, a fun way to learn

Colour Africa Proverbs is a unique project that encourages reading and respect for others and the environment among children between the ages of four and eight.

Created by a somewhat unlikely source – a team of Cape Town-based graphic designers – the book is a collection of proverbs from around Africa, which are presented along with illustrations, words in different shapes and pictures that children can colour in.

Colour Africa Proverbs, through its words of wisdom, promotes respect, teamwork and patience in an educational and fun way. The cover is made with 100% recycled materials, to encourage environmental friendliness among the young readers.

Each page is dedicated to one proverb, quoted at the top of the page, for which a translation is provided in illustration form below. To further emphasise the proverb’s meaning, the opposite page features a picture that can be coloured in. Next to the original-language saying is the country from where it originated.

“Most colouring books are very commercial,” explained Le Roux, who was responsible for the illustrations. “We wanted to create a book for children and parents that feels familiar and has local content.”

Furthermore, the letters of the words in the translation have to be coloured in, a process that Le Roux explains was incorporated to help children pay special attention to their spelling skills.

“I specifically wanted the text to be hand drawn and pictorial,” she said, “to show young children how closely drawing, writing and reading are linked. The drawings also encourage children to get ready to read and explore letter-forms while doing a fun activity.”

Across the centre spread is a maze-like game that can be played by more than one person, where the winner is the first person to finish a race and reach a set destination. Along the way, players encounter obstacles and in some cases have to rely on each other for help, and in this way are forced to work as a team.

The designers have drawn on wisdom from Kenya, Ethiopia, Namibia, Zimbabwe and South Africa, among other countries. Following the vast interest from Afrikaans speakers, an edition in that language has now been made available.

Plans are also in place to translate the book into other languages as well, while also adding more editions to turn the project into a series.

The Design for Development team believes that using the different languages in the book also helps children to embrace the cultural diversity of the continent. This way, they not only pay attention to what makes African cultures different, but also how to respect and honour these differences.

One isiZulu proverb, says “Ikhotha eyikhothayo” which means “The cow licks the one who licks her”. The saying promotes the value and benefit of helping others when they most need it.

Following its appearance at the 2012 Design Indaba in March, Colour Africa has attracted international interest and books are being stocked in shops in the US and some countries in Europe.

Seeing this as an opportunity to distribute to an even wider audience, the company has recently launched an online shop. Local customers can view a list of stockists on the Design for Development website.

One element of their distribution plan is to get as many hard copies to under-resourced crèches and early childhood development centres across the continent as possible.

The book is already a feature at crèches across the Western Cape suburbs of Khayamandi and Philippi, while a pupil in another school in Cape Town arranged to donate several copies to a small village in the Eastern Cape. 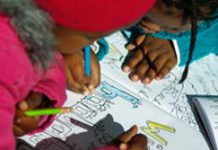 Pages and pages of wise words