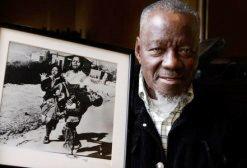 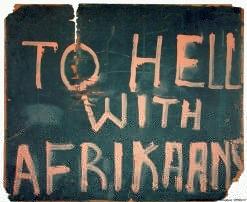 A depiction of the so-called Bantu Education
system.
(Image: City of Joburg) 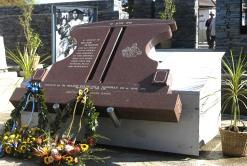 The June 16, 1976 Memorial at the Hector
Pieterson Museum in Soweto.
(Image: Enoch Lehung, City of Joburg) 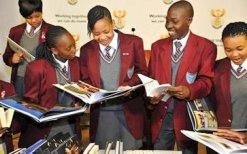 Ahead of Youth Day, Sam Nzima urges
the young people of South Africa to
protect and support each other.
(Images: SouthAfrica.info)

RELATED ARTICLES
• Youth Day: lessons from 1976
• Playing a part to give youth a future
• Let’s learn and honour Children’s Act
• How does Mandela Day inspire you?

“Take back your courage!” declares Sam Nzima, former apartheid photojournalist, urging young people of South Africa to assume the strength and courage of their predecessors.

Nzima took the legendary photograph of the fatally wounded 12-year-old Hector Pieterson being carried by Mbuyisa Makhubo, while Hector’s sister Antoinette Sithole runs alongside. It is a photograph that captured and exposed not just the Soweto uprising on 16 June 1976, but the entire struggle of black people during apartheid.

That event is commemorated on the annual Youth Day, 16 June, and the whole month around the day is focused on strategies to develop and uplift South Africa’s young people.

The government’s theme for Youth Month 2012 – Together we can do more to build infrastructure and fight youth unemployment – is an ambitious one, but conveys hope to many South Africans who recognise the struggles that were overcome.

Ahead of the countrywide celebrations, Nzima conveys a message to young South Africans in his gripping and courageous story, and carefully reflects on the events of that fateful day.

Nzima, 78, is a warm-spirited man who remembers that day as if it were yesterday.

“I will never forget that day in Soweto,” he says with candour in his voice. “It is in my blood and now part of me.”

On 16 June 1976, thousands of South African schoolchildren marched in protest of the so-called Bantu Education system – the rest is history.

Nzima arrived in Soweto early that morning, assigned to cover what he thought would be peaceful protests.

“I thought it would just be an ordinary day,” he says. “I had no idea it would be a day that would go down in the history books of South Africa, or that a child would be killed.

“The students were just going to protest their rights and take a memorandum of demands to the education department,” he recalls and then pauses. “They did not even reach their destination.”

Nzima watched from a distance as students painted signs that said “Afrikaans must be abolished” and “We are being fed the crumbs of education” – at the time black students were forced to study a sub-standard curriculum and were taught in Afrikaans, the language that, to them, represented their oppressor.

As they began marching, the students were confronted by the police and began to sing “Nkosi Sikelel’ iAfrika” – the national anthem of South Africa today, but a protest song that was banned back then.

The police began shooting, and Nzima saw a boy fall. The tall Mbuyisa Makhubo, then just 18, quickly picked him up and began to run. Nzima took six pictures as the wounded boy was taken to the nearest car, driven by a colleague from his newspaper, and rushed to a clinic. There, he was pronounced dead and identified as Pieterson.

Nzima, working at a time when restrictions on reporting on conflict were draconian, removed the film and hid it in his sock. Later, police forced him to expose the film in his camera, but the photos of Pieterson were safe.

Pieterson was one of the first to die from police gunfire after Soweto students were ordered to disperse. Reports varied on the number of people killed – some say about 180, others 400.

Trials of the man behind the photograph

The police were enraged by the attention his photograph drew, and Nzima left Johannesburg and his newspaper, fearing for his life. For a long time he lived under house arrest, and was constantly harassed by the police. But his photograph continued to garner attention and would later go right around the world.

Nzima now enjoys a peaceful existence in his hometown of Lillydale in Mpumalanga, where he is a humble community leader.

Although he was honoured on Freedom Day 2011 with a National Order for his contribution to photojournalism and for exposing apartheid brutality, the fame the photograph has brought him is equally matched with loss as it resulted in the end of his career, and banishment from Johannesburg, to live in abject poverty.

Despite these unfortunate circumstances, Nzima does not regret the path fate chose for him that day.

“At first I hated the picture, because I thought I would be killed for taking it,” he says. “But even though it was the end of my journalism career and my life in Johannesburg, it gave back so much tenfold.”

Nzima’s photograph tells a courageous story because it has lived for over three decades and made its way to the 18-year-old democratic South Africa.

“You don’t even need a caption to see that something terrible has happened,” Nzima says, describing his photograph.

The heartfelt photograph has received worldwide recognition over the years and has even been honoured in the Hector Pieterson Schule in Berlin – a school named after the young victim.

“I’m happy that the Germans saw the opportunity to name one of their high schools after Pieterson,” Nzima says. “This means the picture I took left its mark on them as well.”

Nzima wishes to one day open a photojournalism school of his own for young people. He hopes in turn they will go out and take truthful photos of history that the whole world will see and remember.

‘Young people must carry each other’

Nzima’s advice to teenagers and young adults of today is clear as it is in his photograph – young people must carry each other.

“Every day is a struggle for young people today and that is all the more reason they should protect and support each other,” he says.

Back then, Nzima reflects, young people were so eager to learn that they fought for it.

“Today’s youth do not appreciate their freedom because they did not struggle for it. It was given to them and therefore they do not know the worth.

“If protesting students did not take into their own hands the fight for their right to education 36 years ago, the youngsters of today would not enjoy their freedom and education.

“Fighting for a better education is not something that is demonstrated these days by the younger generation. Today, they have so much of freedom that they are fighting HIV/AIDS, alcohol and drug abuse and rape instead.”

Nzima remembers the restrictions black people had during apartheid.

“We could not even enter a grocery store. If we wanted to buy groceries we had to purchase them through the windows in the back. We could not walk around freely and do as we please because of those restrictions.”

‘Take back your courage’

“Take back your courage”, is the message from Nzima.

“The respect of the younger generation must be strengthened, and at the same time children must be guided,” he asserts.

Every year the children of South Africa are born further away from 1976, and memories of those long-ago Sowetan students are fleeting. The country has just one day a year to recreate and remember, and educate young people on the sacrifices that were made so they could enjoy free and equal education.

“They need to learn about June 16 and the Soweto massacre every day, not just one day a year,” Nzima says.

Although the history of apartheid and the Soweto Uprising are taught in schools across South Africa, it is imperative for young people to acknowledge the sacrifices made for them, in every aspect of their lives today – not by force or obligation, but out of willingness, respect and appreciation.

While some still suffer the aftermath of apartheid, we can take comfort in knowing that today every child is born into a free South Africa with the right to education.

Former president Nelson Mandela said: “Education is the most powerful weapon which you can use to change the world.”

It is important, says Nzima, for the young people to remember how far we all have come and recognise the people who helped get us here. Most importantly we must remember – much like back then – that the courage of the youth ensures the victory of our country.