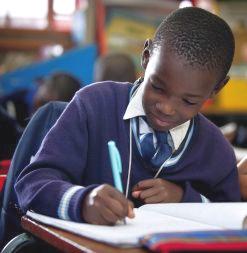 For many South African children, starting
the school year with an assortment of
stationery goodies is considered a luxury.
(Image: Tynago Communications) 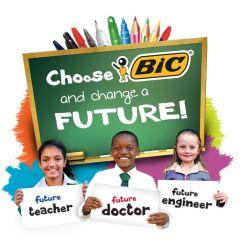 BiC will donate one-million pens to needy
South African children by March 2012 as
part of its Choose BiC and Change a
Future campaign.
(Image: Tynago Communications)

French-based company BiC, best known for its iconic ballpoint pen, has pledged to donate one-million pens to needy South African children by March 2012 as part of its Choose BiC and Change a Future campaign.

For many South African children, starting the school year with an assortment of stationery goodies is considered a luxury. Many children go to school without even the most basic stationery items such as pens.

Through the campaign, BiC wants to give children the tools they need to help them on their way to becoming South Africa’s future teachers, engineers, doctors and lawyers.

“It’s our way of using our brand’s power to champion education and to equip and empower the children who need it most,” says Millicent Quoilin, BiC marketing manager of stationery.

How you can help

BiC’s new campaign hopes to change this and it has invited companies and consumers to join them in making a difference.

Over 20 different BiC products have been branded with ‘Choose BiC and Change a Future’ stickers. Each time one of these packs is sold, BiC will donate a pen to a disadvantaged child.

As part of the campaign, BiC will also give away cash prizes towards education, as well as iPads.

The pens will be distributed by the READ Educational Trust, an NGO that operates in the education and literacy sectors.

It is funded by foreign donors and the private sector and works with the Department of Education to implement teacher training and literacy projects in schools.

Bertus Matthee, national director of the READ Educational Trust, says that providing school children with writing tools is as important as having books to read.

“Being able to put one’s thoughts down is the start of a good education,” Matthee said in a statement. “Since today’s pupils are those who will be writing South Africa’s future, the significance of a donation such as this cannot be underestimated.”

Literacy is a major challenge for South Africa and the country’s Department of Basic Education has identified education as a priority area.

“Based on Unicef’s belief that education breaks the generational cycles of poverty and disease, BiC’s ‘Choose BiC and Change a Future campaign’ could begin to rewrite the history of education in South Africa,” Quoilin says.

According to Unicef, 21 African nations have adult literacy rates below 50% and in sub-Saharan Africa alone, about 45-million children don’t go to school.

Official figures show that about 4.7-million adults in South Africa are illiterate. The country’s unemployment rate of 24% is among the highest in the world.

Tertiary institutions have also come on board to address South Africa’s literacy challenge.

Last year Stellenbosch University launched a new initiative, known as Words Open Worlds, which is distributing books in rural and disadvantaged communities. Since the beginning of 2011, the project has reached around 30 000 people.