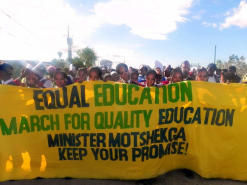 Equal Education has taken to the streets, with the support of pupils, teachers and civil society groups who want to see change in South Africa’s schools.
(Image: Equal Education)

Mud and shack schools have been part of rural areas for a long time.
(Image: SouthAfrica.info)

Basic Education Minister Angie Motshekga has made a commitment to the promulgation of minimum norms and standards for school infrastructure, just days before a court case relating to the matter – brought by the NGO Equal Education (EE) – was to be heard in the Bhisho High Court.

EE chairperson Yoliswa Dwane said an out-of-court settlement had been reached with Motshekga that would ensure that the norms and standards were made available for public comment by 15 January 2013 and finalised by 15 May of that year. The case was to be heard on 20 November 2012.

“Equal Education welcomes Minister Motshekga’s decision to take this step,” said Dwane in a statement released on 18 November. “Already, prior to her decision, all nine provincial education MECs and the minister of finance chose not to oppose the court case.”

EE, represented by the Legal Resources Centre (LRC) in the case, which was first brought to court earlier in 2012, viewed the move as a small victory in the battle to achieve equality in education for South Africa’s poor.

The norms and standards prescribe conditions that have to be in place for a school to be able to function reasonably, regardless of the locality of the school or the number of pupils and / or teachers. Basic services such as water, electricity, sanitation, functioning libraries and science laboratories are just some of the requirements put forward by EE.

An amendment to the National Schools Act in 2007, which gave powers to the education minister – Naledi Pandor at the time – to adopt the norms and standards, led to the adoption by Motshekga of the National Policy for an Equitable Provision of an Enabling School Physical Teaching and Learning Environment in June 2010.

According to the policy, the minister was to promulgate the regulations by March 2011. It was the delay in achieving this goal that prompted campaign action from EE.

Dwane hailed the work of EE members, whom she said “marched, fasted, slept outside parliament and studied long and hard to understand the issues”.

“It is also a victory for our legal team,” she said, “of whom the anchor has been Cameron McConnachie of the Legal Resources Centre.”

Brad Brockman, the general secretary of the NGO, said the norms and standards took an abstract right to basic education and made it concrete so far as infrastructure was concerned.

“Citizens will be able to appreciate that they are entitled to water and electricity in their schools, and thereafter to libraries and computer centres.”