The NMMU Business School is the region’s newest such facility. 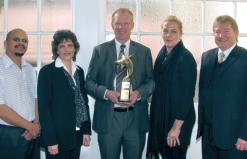 The awards are organised by the World Brand Congress and CMO Asia, which is an arm of the California-based CMO Council, a peer network of marketing executives and brand decision-makers from around the world. It promotes global best practices, knowledge sharing, market transformation and relationship building among its more than 20 000 individual members located in 100 countries.

The award process took place in three stages. Experts from 20 countries were asked to identify institutions that were, in their opinion, leading business schools. Secondary data were gathered from sources such as newspaper reports, alumni, social groups, and websites.

A team of researchers then put together an information pack on each institution, which included statistics such as faculty accomplishments, academic input and graduate placements, as well as statements on purpose, mission, vision, and more.

Finally, this information was passed to the jury, who assessed it carefully before selecting the winners.

Based in Port Elizabeth in the Eastern Cape, the NMMU Business School was founded in 2005 and is the youngest such institution in Southern Africa.

It was one of 12 award recipients in the business leadership category, and it was the only African institution recognised. Most winners were drawn from the highly competitive Indian and Southeast Asian tertiary education system.

A number of individual awards were also given to leading professors in scholarly disciplines, also mainly from institutions in India and other Asian countries.

According to CMO Asia, the award “pays tribute to leading business schools that are shaping the destinies of the future leaders who will make this world a better place to live”.

Senior lecturer Dr Margaret Cullen received the award on behalf of NMMU, which shared the spotlight with institutions such as the American University of Sharjah, the Bangladesh Institute of Bank Management, the British University in Dubai, the University of Colombo, and the Graduate School of Business at Seoul University.

Prof Steve Burgess, NMMU Business School director, expressed his delight at the accolade, saying that the award will inspire the school and leadership academy to carry on with their hard work.

“We have embarked on a journey to build a new model of a business school that is alive to the realities of business leadership in Africa and the Indian Ocean Rim. This prestigious award comes at a time when we are about to break ground on Africa’s first four-star green star rated business school building.”