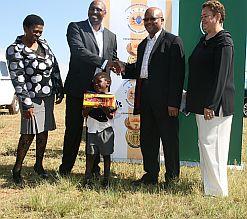 Mamokete Mokoena Mncube, principal
of Duzenendlela Primary School;
Joshua Pule, Nedbank’s portfolio
manager for CSR; Mlamleli Belot of
the City of Joburg; and Antoinette Nicolaai,
district director of Johannesburg South
at the Department of Education, handing
over essential school items to a pupil. 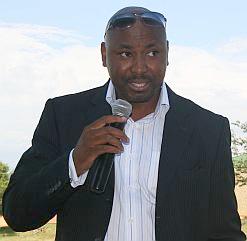 Pule said that Nedbank strives to
contribute towards a strong, flourishing,
knowledge based economy in South
Africa, hence its involvement in
education and the community. 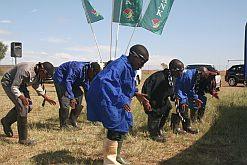 The challenges in education and of poverty in South Africa are being tackled by Nedbank through its Back-to-School campaign, which is making sure pupils have all the resources needed to succeed at school.

On 8 March 2012, Nedbank, the Department of Education and representatives from the City of Joburg met pupils and teachers at Duzenendlela Primary School, in Sweet Waters, in the south of Johannesburg. They were there to hand over essential school items such as uniforms, shoes, stationery, books, bags and sports kits to the underprivileged pupils.

In return, the pupils sang, recited poems and danced for their visitors. The school choir sang the national anthem, a pupil recited Gift Mzingwa’s poem, The Black Badge, and some boys performed a gumboot dance.

Duzenendlela, a no-fee-paying school, was one of four schools that received these essentials. The others were Inkululeko Yesizwe Primary, Itemoheng Primary and Govan Mbeki Primary. All are situated in and around Sweet Waters, a poor settlement on the southern outskirts of Johannesburg.

More than 200 pupils are benefitting from the campaign.

“The Back-to-School campaign seeks to ensure that even those learners from disadvantaged backgrounds have an equal chance at being the best student they can be.”

This year’s campaign was launched in January in Limpopo and has been rolled out in KwaZulu-Natal, Free State, Western Cape, Eastern Cape, North West and Mpumalanga provinces. Nedbank is investing R2-million (US$251 000) in its 2012 campaign. Some 1 800 pupils across the country will benefit from the initiative.

Antoinette Nicolaai, the Department of Education’s district director in Johannesburg South, said: “Just as President Jacob Zuma outlined in the State of the Nation Address [on February 9], education is vital for people to take their rightful place in society.”

The school close to the road

Duzenendlela means “close to the road”, which is literally where the school is situated. The school is on the Golden Highway, the busy main road leading to Sweet Waters.

It offers underprivileged children from the nearby informal settlements of Sweet Waters unpaid schooling with a nutrition programme and transport scheme to fetch and drop them off before and after school.

Mamokete Mokoena Mncube, the principal, said: “The school appreciates what Nedbank has done for us. Our pupils are from poverty-stricken areas where the unemployment rate is high and these resources provided by Nedbank will go a long way in offering them a quality educational experience.”

The vegetable tunnel donated by Nedbank would also help with the nutrition programme as vegetables would be used for the soup kitchen. They would also be sold, so helping the school with fund raising.

The bank, one of South Africa’s big four, has invested nearly R22-million ($3-million) in Gauteng over the past five years in education, health, community and socio-economic development programmes.

These include: financial support to the tune of R7-million ($928 000) for orphaned and vulnerable children studying at Dominican Convent; funding extra tutorials in maths, science and English for R1.4-million ($186 000) through the Tomorrow Trust and Leap Maths and Science Schools; R700 000 ($93 000) for leadership development of high school pupils through Heartlines; teaching 9 000 pupils at 65 schools in grades 6 and 7 to play chess; as well supplying mobile laboratories and classrooms.

Joshua Pule, Nedbank’s portfolio manager for corporate social responsibility, said: “We at Nedbank are passionate about contributing towards education and building closer relationships with our communities.

“This we do to ensure that we enable access and opportunities for learners and improve educational facilities throughout South Africa to build a strong, flourishing, knowledge-based economy.”