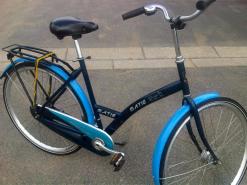 The Matie bike was imported from the
Netherlands, where cycling is a major
pastime and a way of life.
(Image: SU blog)

The University of Stellenbosch (SU) in the Western Cape has launched a cycling project to promote greener, more sustainable living on campus and, at the same time, resolve some of the university’s traffic problems.

The cycling initiative was launched during SU’s Sustainability Day celebrations on 15 March, when 400 Matie bikes were made available for university students and staff to rent.

To promote the initiative a cycle relay was held on the day, with teams of four and at least one member on a Matie bike.

“Matie” is the nickname for the institution’s students, former students and staff. There are various theories as to its origin – some claim that it stems from the Afrikaans word “tamatie”, or tomato, a reference to the university’s maroon colours.

However, the Afrikaans word “matie” is a version of the diminutive “maatjie”, meaning “friend”, and this is the more likely explanation.

The scheme was announced by SU’s rector and vice-chancellor, Prof Russel Botman, who said the Matie bike project is part of the university’s contribution to a greener environment.

“Worldwide, a mind shift has occurred. Humankind has realised that our natural resources are limited and that we cannot continue polluting our planet like we have been doing,” he said.

The initiative is part of the HOPE Project, a university-wide campaign to create sustainable projects on campus. It also fits in with SU’s mobility plan, aimed at reducing the growing traffic and parking problems at the university.

As part of these sustainability efforts, the university recently introduced a shuttle service, with park-and-ride facilities available at two sites and two bus routes doing service from 7.30am to 5pm each day.

Students also play an active role in the HOPE Project.

Every year the Student Representative Council manages the Eskom Energy Challenge, in which hostels compete against each other to see who can conserve the most energy and recycle the most waste. There is also an EcoMaties student organisation that promotes sustainability on campus through various awareness campaigns.

SU has a Centre for Renewable and Sustainable Energy Studies, which offers a post-graduate qualification in the field, as well as a number of short courses.

“The overarching aim [of the cycling initiative] is to reduce motor vehicle traffic on campus and in the rest of Stellenbosch and to contribute to sustainability in this way,” says Martin Viljoen of the SU media liaison office.

“The idea is to declare the whole campus cycle and pedestrian friendly.”

Safe cycling routes will soon be part of the campus architecture, taking the SU back to the time when it was mostly a cycle and pedestrian campus. The first cycle route will be created in Victoria Street, with future campus routes linking up with similar routes that the municipality is planning for the rest of the town.

A bicycle shed is available at the well-known campus cafeteria, Neelsie, and others will be erected elsewhere in the future.

The Matie bikes come from the Netherlands, where they were used in a rent-a-bike scheme for train commuters. The two-wheelers were imported into South Africa by the Bicycling Empowerment Network South Africa (BEN), with the assistance of the Dutch Ministry of Foreign Affairs.

BEN, a countrywide initiative started in Cape Town in 2002, promotes the use of bicycles as a sustainable form of transport, especially in poorer communities. It imports used bicycles from abroad and helps cities to plan for and facilitate their use as part of urban management.

To promote the cycling initiative before the formal launch a Matie bike team took part in the 2012 Cape Argus Pick n Pay Cycle Tour, the largest timed cycling event in the world, on what they jokingly referred to as a “mission impossible”.

The 110 km route runs along the Cape Peninsula and, apart from the many smaller uphills, has four extremely strenuous climbs which, on occasions, have to be tackled in the face of a gale-force south-easterly wind.

Taking part in a race known as much for its high degree of difficulty because of its many climbs as for its breathtaking beauty, the eight-member Matie team, which included the Matie mascot Pokkel, challenged the notorious 169m Chapman’s Peak and the final Suikerbossie hill.

Amidst the thousands of sleek, hi-tech machines, their success on their heavy, single-speed commuter bicycles, equipped with fat tyres and no gears, has been captured on YouTube.

The university is an integral part of the city of Stellenbosch, so traffic congestion and parking are city-wide problems, especially when the academic year is in full swing and the 18 000 students return to the campus.

For its part, the City of Oaks, as Stellenbosch is also fondly known, is considered to be the heart of South Africa’s wine industry.

Every year thousands of tourists converge on the quaint village-like town, with its majestic oak trees and Cape Dutch architecture, to savour some of the excellent wine and food produced by more than 200 establishments.

The Stellenbosch wine route, the oldest in South Africa, celebrated its 40th birthday in 2011.