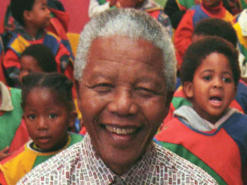 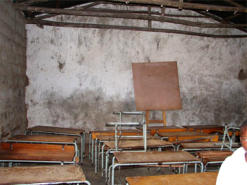 Before the NMI stepped in, this school was dingy and dilapidated – not an atmosphere conducive to learning. 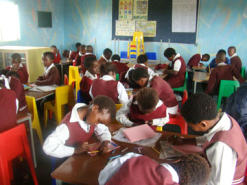 The same school afterwards, where pupils can learn in a cheerful, encouraging environment.
(Images: Nelson Mandela Institute for Rural Development and Education)

He is a statesman, an icon of peace and one of the greatest humanist thinkers of our time. Yet Nelson Mandela, Nobel prizewinner and South Africa’s first democratically elected president, is the child of illiterate parents. It is no wonder that education is one of his great passions, both as a tool for personal development and a powerful driver of social change.

Mandela’s view, often repeated, is that education is not only “the great engine of human development” through which “the daughter of a peasant can become a doctor”, but also “the most powerful weapon we can use to change the world”.

Mandela grew up in the deeply rural Transkei region of today’s Eastern Cape, where education was rudimentary, bordering on non-existent. He was the first member of his family to graduate from high school.

“I grew up in an area where education for blacks was very rare indeed,” he said during an address to the London School of Economics in 2000. “My parents had never been to school. They were completely illiterate.”

A major part of the legacy Mandela will leave the world are the four organisations he has founded over the past two decades: the Nelson Mandela Children’s Fund, the Nelson Mandela Foundation, the Mandela Rhodes Scholarship, and the Nelson Mandela Institute for Rural Development and Education. All of these, directly or indirectly, work to improve people’s access to, and the quality of, education in Africa.

But it is the Nelson Mandela Institute for Rural Development and Education (NMI) that, in a hands-on way, addresses Mandela’s formative experience of education: its scarcity in the rural, tribal regions on the country, particularly the Eastern Cape.

“The Eastern Cape [is] an area of South Africa much like the one so well described to you by Thomas Hardy,” Mandela said in his London speech. “It was a world of oral tradition, healing properties were herbal, an abscess would be treated with poultices, clean water was simply not available. Gastrointestinal infections, malaria, cholera were rampant. Life was brutish and short.”

Infrastructure is not enough

Mandela established the NMI in 2007, based at the University of Fort Hare in the Eastern Cape, as a world-renowned centre for rural teacher development rooted in solid applied research. Today it is a small but dedicated organisation working with rural teachers, pupils and their parents to to create classrooms that work for children living in some of the poorest regions of the country.

One of the problems of rural education is that many educational tools – policy, curriculum, teacher support materials – are developed for confident, middle-class English-speaking teachers and pupils in urban areas. That is where they are tested. When they are given to rural teachers to educate rural children, they fall flat.

Through the 1990s and 2000s, Mandela worked with the private sector to build schools in rural areas, resulting in an extraordinary 140 new schools with first-class infrastructure. But after five years or so, these schools were found to have become as dysfunctional and ineffective as most other poor and rural public schools. The teaching and learning project had collapsed.

“While the school children still benefited from sounder infrastructure, the educational project of teaching and learning was still not alive,” says Basetsana Khumalo, who works on the NMI’s investment and finance committee. “Sound infrastructure is a necessity for quality education but, on its own, does not cause quality education.”

Mandela and his team realised that a longer-term, more hands-on approach was needed, one that properly understood rural education, was able to rectify its problems, and put rural teachers and learners at the heart of the solution. They saw that there were few institutes working directly with the needs and realities of rural learners, teachers and parents, to build a sustainable system of quality education over time.

“Teachers across the globe stay in the classroom mainly for one reason,” Khumalo says. “Beyond the pay cheque, teachers stay in the classroom because of the energy they get when they see a child ‘break through’. It is extremely beautiful, and very rewarding – when a child startles herself with a breakthrough moment.

“However, if we have the wrong educational tools and conditions, children do not break through. And when no one is winning, we get frustrated … There is a war of frustration in our classrooms that most dangerously is most often turned inwards on children and teachers themselves.”

The NMI team is highly skilled, with the energy to live in rural schools and communities, working side by side with teachers and pupils to find solutions that work. In this way they create tools and methods to build child-friendly text-rich primary school classrooms that promote reading, writing, expression and critical thinking.

Importantly, these solutions are field-tested to work specifically in the context of the rural school. They are then used to create teacher training and professional development coursework that allows them to properly teach the rural child.

The core work of the NMI is to re-engineer the foundation phase classroom in line with the social and linguistic needs of children and teachers. The team focuses on physical ergonomics, learning and teaching tools, curriculum and pedagogy.

Bilingual education gets careful attention. The children’s home language must be strengthened to ensure cognitive development, while at the same time English is systematically introduced to prepare them for instruction in that language further into their schooling years.

“They are magic because they are places where teachers and learners can see, for themselves, the magical process of learning breaking through. One elderly man said to me simply, ‘This is a classroom for a human being.’”

Before working with the institute, classrooms carry the heavy burden of long-term neglect. Teachers have little ability to systematically support the children’s conceptual progress. There is no reading breakthrough up to Grade 3.

“There can be no contentment for any of us when there are children, millions of children, who do not receive an education that provides them with dignity and honour and allows them to live their lives to the full,” Mandela said at the launch of the institute in 2007.

“The establishment of the Nelson Mandela Institute for Education and Rural Development is the realisation of a long dream for me. It will carry my name and embody my commitment to a world where all children are afforded the opportunity to fulfil their dreams.”

The institute runs a number of programmes, including the community-named Magic Classrooms, as well as Ilima Lokufunda and the Grounding Programme at the University of Fort Hare.

The NMI also has a strong partnership with Unicef through the Schools for Africa Partnership, ensuring the work informs and is informed by developments in education across Africa.