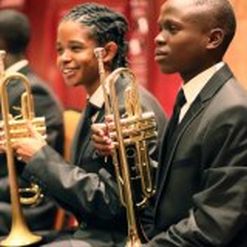 Its website states that its mission is to “use the creation and performance of music in all its various forms to enhance confidence and life opportunities of rural, disabled and urban children and youth in Limpopo Province and beyond”.

The orchestra has just released its first album, entitled Merethetho, meaning “home to your roots”. It was three years in the making and has been produced by acclaimed multi-instrumentalist jazz musician Pops Mohamed. Present at the launch was the deputy minister of arts and culture, Dr Joe Phaahla; the chairman of the National Lotteries Board, Prof Ntshengedzeni Nevhuthanda; crews from three TV channels; and journalists and artists.

Kellerman, who was not able to be at the launch, says on the orchestra’s Facebook page: “It’s been such a privilege to be part of this project and I’m so sorry I can’t be at the launch – I’m touring in Australia at the moment. I would like to congratulate the Limpopo Youth Orchestra, Pops Mohamed and everybody who was involved for a job well done. The CD is beautiful!”

The orchestra integrates classical orchestra instruments with indigenous African instruments. It consists of 40 performers, 15 of whom are disabled. Instruments include the violin, viola, cello, flute, clarinet, tuba, trumpet and trombone, plus marimbas and djembe drums. Children start with the recorder, learning the basics of theory and practice, and once they have passed the basic Royal School of Music exams, they join the orchestra.

Founder and director Simone Aronje-Adetoye, who plays the piano and the violin, says people initially laughed at her when she suggested starting a youth orchestra in Limpopo. The youngsters couldn’t speak English, she couldn’t speak Sepedi, there were no instruments, no teachers, no other orchestras in the province to prove it could work, and funding was a huge challenge.

“People laughed at me and said it was the height of stupidity,” she says. But undaunted, the orchestra was formed in 2004, and seven years later, its first matriculant is planning to study music at university.

A big part of the thinking behind the initiative is upliftment. “The orchestra project is dedicated to the development and empowerment of youth from previously disadvantaged backgrounds and from marginalised areas, as well as youth with physical disabilities,” indicates the website.

That means that it’s not simply about playing an instrument in a group. It’s also about poverty alleviation, giving disabled children opportunities to express themselves, integrating rural and urban communities, and preserving indigenous African instruments and knowledge.

“Learning to play an expensive instrument such as a violin or a cello is a luxury for many families in South Africa due to their limited means of income. But numerous children in Limpopo’s rural areas are doing so,” it reads. “Bursaries are sourced for further study for its members, unemployed youth earn money through performances and teaching, and valuable partnerships were formed with the South African Army and Police bands.”

About 200 youngsters in Limpopo are being trained at present, ranging in age from 10 to 25. Of these, 70% are from rural areas and 12% are physically disabled.

In 2002, Aronje-Adetoye, who is from Cape Town, moved to Giyani in Limpopo to work as a teacher. She soon had a group of youngsters playing the recorder, an inexpensive and easy-to-learn instrument. Most children came from urban centres, like Polokwane, but there were children from far rural areas who also learned to play the instrument.

The first funding of R20 000 came from a special provincial fund to empower the youth. This money bought instruments, paid for training teachers, and importantly, food parcels and clothing for families that needed them, to “rescue the children”, so that they could go on to reach their potential.

“It was a shock to see the extreme poverty in Limpopo. There is nothing to keep the youth busy. I am passionate about making a difference.”

The urban children donate food and clothing to the rural children. The urban children also pay fees, which are used for the benefit of their rural counterparts. In return, the urban members get extra maths lessons on Saturdays. “The kids learn discipline and time management, as well as building their confidence,” says Aronje-Adetoye.

And the results are testimony to this – last year all the matriculants in the orchestra passed with exemptions.

Checkers Woman of the Year

In 2006, Aronje-Adetoye was nominated in the entrepreneurial category of the Checkers Woman of the Year, and although she didn’t win, the publicity generated brought in sponsors who offered services, like registering the orchestra as an NGO, or auditing the company, an essential pre-requisite to apply for funding from the National Lottery.

And in 2007, the National Arts Council came on board, donating R75 000, which was used to buy instruments. Then, in 2010, the orchestra hit the big time and was granted R5-million from the lottery.

Music teachers come from Johannesburg and Nigeria, and the conductor, Olanmide Timothy, is also from Nigeria. “We have a wonderful collaboration between South Africa and Nigeria,” explains Aronje-Adetoye, who is married to a Nigerian.

The orchestra holds two major concerts a year – one in winter and one at Christmas. But that doesn’t mean they’re not busy – they entertain for the provincial government’s gala dinners, at weddings, corporate functions, birthday parties, and memorial services. Rehearsals take place every Friday evening.

Now that the CD has been released, they plan to tour to Nigeria, and they have been invited to tour Ireland.

Aronje-Adetoye says she’s realised it’s these kinds of partnerships that are most valuable. Kellerman has promised to work with them in the future, and Mohamed has expressed an interest in starting a quartet with some of the youngsters in the orchestra. “This is what makes me wake up in the morning,” says Aronje-Adetoye, “the one project that doesn’t make me want to go back to Cape Town.”

They are hoping to get more funding from the National Lottery, with big plans to build a conservatoire, or school of music, studios and a concert hall in Polokwane.