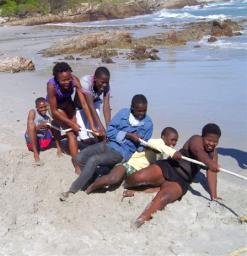 Leisure outings are part of the life-
enriching experience brought by Theo
and Angie Krynauw to Quayiya
Secondary School. 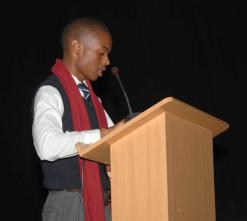 Rather than settle down to a sedate retirement, a couple from Hermanus in the Western Cape has pitched in to change the lives of pupils at a school in an informal settlement and, in so doing, has helped the school to double its matric pass rate in just one year.

Last year, matriculants at Quayiya Secondary School in the informal settlement of Zwelihle, outside Hermanus, notched up a 66% pass rate – an impressive achievement , because just a year before the school had been classified by the Department of Basic Education as dysfunctional, with more than two-thirds of its pupils failing the all-important Grade 12.

Zwelihle is an isiXhosa-speaking settlement of some 30 000 inhabitants, most of whom are unemployed.

This remarkable success is largely the result of the dedicated investment of time and interest by Theo and Angie Krynauw, and the partnership they have built with Quayiya’s principal, Nkosilungile Lolwana.

“It has been the most thrilling and fulfilling year of our lives,” says Theo Krynauw.

Their work recently attracted sponsorship from insurance group MiWay, which supports the Krynauws’ outreach programme with a car and petrol and mobile costs.

Getting involved in the community

When the Krynauws moved down to the coast from Pretoria in February 2011 they felt they had a calling, and had their hearts set on becoming involved in the broader community.

The couple was touched by the plight of Quayiya, which had such a negative public image that nobody wanted to become involved with it.

“It was as if people had given up on it and couldn’t be bothered any more,” says Krynauw.

With a matric pass rate of 32% in 2010, the school had been classified as dysfunctional and seemed to be beyond saving. This was just the challenge the Krynauws were looking for.

“We went up to the school and told them ‘we are here, we are available, how can we help’,” Krynauw recalls.

At first they would speak to the pupils every Monday during assembly. The couple would arrive at the school with a borrowed public address system and talk to the 1 200 pupils about living a spiritual and motivated life.

“Our focus is not on religion but rather on raising the values of the children in general,” says Krynauw. “If a person feels they have value, they start to do valuable things.”

The first few assembly meetings were soon followed by more practical exercises and now, each week a different group of ten pupils is taken on an excursion to expose the youngsters to something totally outside of their limited life experience.

“We take them to art galleries, farms, radio stations, nature walks, and even crazy
beach parties. Often experts in the field of interest accompany us.”

Two pupils are chosen from the weekly group and are brought in to spend one night with the Krynauws at home.

Ivy Ngoqi and Lungisa Qendu are two such pupils. Familiar with the hard knocks of life, they now believe they have a future.

Life has been very difficult for Ivy since her mother died in December, says Theo Krynauw. But she dreams of becoming a paramedic and, with the couple’s help, is working hard towards that goal.

An exceptionally pretty girl, Ivy could also very easily be a Face of Africa model, the Krynauws believe. To help get her modelling career off the ground, which could ultimately help her to achieve her dream of becoming a paramedic, the Krynauws will take her to Cape Town later this year to build a professional modelling portfolio.

Lungisa is junior mayor of the Overstrand Municipality, where Hermanus is situated. Krynauw refers to him as a “remarkable boy” with leadership qualities that have helped him develop into one of the best junior mayors the area has ever produced, according to Theo de Wet, manager of the Overstrand junior council.

De Wet was instrumental in launching the junior council eight years ago, and says that in its history Lungisa stands out as the best to date – quite an achievement considering that some junior mayors came from far more privileged and well-educated backgrounds.

The junior council is racially representative with the 35 members selected from five schools in the area.

“Some members, such as Lungisa, live in shacks while others come from rich families who travel overseas once a year,” says De Wet.

Junior council members have to undertake at least eight community service delivery projects during their one year term.

De Wet is also the founder of the Enlighten Education Trust which works with youngsters between the ages of 15 and 25 in the Overstrand area. A non-profit organisation which focuses on life skills, life enrichment and leadership, De Wet makes it clear that Enlighten is not an upliftment programme.

“There are thousands of youth trapped in townships with limited life experience or with experiences only moulded by township life,” he says. “We look at those young people with potential and through our three interventions aim to expose them to other experiences and the bigger world outside.”

Lungisa, who excels in maths, hopes to further his studies after matric. If all goes well, and with the help of the Krynauws, he will qualify for a R75 000 (US$9 700) bursary from engineering group Aurecon, to offset the costs of a civil engineering degree.

The medical needs of the children are not ignored. The Krynauws have negotiated with general practitioners, dentists, optometrists and audiologists in the area to give their time and professional help in the case of emergencies.

The real thrill they receive from their work is seeing the way the children are beginning to believe in themselves and how they start to visualise their own future, full of hope, says Theo Krynauw.

“It is so rewarding to find children with such potential and then to somehow or other connect them with a source to meet their practical needs, be it medicine or bursary money for further studies.”

He adds: “For as long as they want us to be involved we will be involved in this school.”