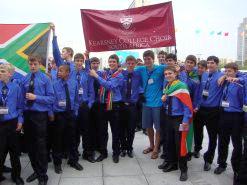 The choir’s US tour is a dream come true
for many of the boys.
(Image: Murray Polkinghorne)

A group of 64 very excited young boys, all members of the award-winning Kearsney College Choir of the private boarding school for boys in Botha’s Hill, KwaZulu-Natal, are heading to New York in June to perform at the UN headquarters.

Their performance forms part of an important international choral festival – The Rhythms of One World – which takes place from 24 June to 1 July.

The aim of the festival is to celebrate the anniversary of the UN charter, the founding treaty of the organisation signed in June 1945. Through the varied musical performances of choral works in folklore, regional, contemporary and national pop music, the festival is also promoting peace through cultural exchange.

Bernard Krüger, director of the Kearsney College music school, says the US trip is a great opportunity for the boys. “One of the highlights of the festival is the closing ceremony at the UN where we will be singing,” Krüger says.

The Kearsney travelling choir is also the only African representative at the festival.

Getting so many boys to the US is expensive and the parents committee at the school is working hard to raise the R3.6-million (US$436 000) needed for the trip.

Many of choir members are on scholarships and without additional support some would not be able to meet the costs of this tour.

“We are always trying to find ways to promote the boys and expose them to sponsors,” Krüger says.

This is a dream come true for many of the boys. Some will be leaving South Africa for the first time and for others this is also their first flight.

Boys from affluent backgrounds as well as children who grew up in the townships are members of the ensemble, and he says that this is one of the reasons why it is so successful.

“Part of the magic of our choir is that the boys come from so many different backgrounds,” he says.

While in the US, the choir will also participate in the seventh International World Choir Games, considered the largest choir competition in the world with over 20 000 singers. The competition is tough as this year the boys will be competing against adult choirs, too.

But this is no ordinary choir and the chances are good that these well-travelled singers will bring home awards again. Since 2000, the choir has won 12 gold medals at the World Choir Games.

“Our choir has had an international footprint for many years and we’ve received many awards in Europe, Germany, Austria, Holland and Asia.”

The Kearsney choir boys have earned an international reputation for their uniquely South African performances.

“What makes this choir different is that it has that South African spirit, energy, smiles and laughter – the boys really have fun when they are on stage,” says Krüger.

“Where most choirs who sing in the competition only perform the notes, our boys enjoy themselves.”

The choir specialises in South African and folklore music, and the boys have no difficulty singing in numerous African languages, including Shona and Swahili. The performances also include a lot of dancing.

Kearsney College Choir is ranked 17th in the Musica Mundi World Rankings, and is the top folklore choir.

Being a member of a choir of this calibre is about more than just casual signing – the boys are required to rehearse nine hours a week and still keep up with their school work, exams and sporting commitments.

Many rehearsals take place in the evening, and when all the other boys are going on half term break, the choir will be working hard to fine-tune their singing skills to perfection ahead of the competition and the UN performance.

Each boy who wants to become a member of the choir also has to undergo an audition. “What I look for is for a spark of potential,” Krüger says.

“The boys are very talented and work very hard.”

The boys also hope to use their visit to the US to raise awareness of two local charities, the Hillcrest Aids Centre Trust and The Sunflower Fund, a bone marrow registry organisation. Both organisations have had a long association with the school.