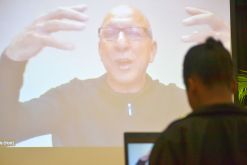 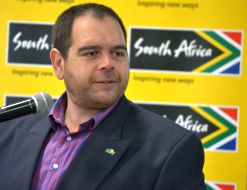 RELATED ARTICLES
• Give youth a voice
• To SA youth: ‘make NDP yours’
• Investing in African youth
• African youth to shake up leadership
• Leading SA’s youth out of poverty

To ensure the success of the National Development Plan (NDP), Minister in the Presidency Trevor Manuel urges young South Africans to do two things: first, they must get to know and understand each other, and second, they must incorporate, wherever possible, the principles of the plan into everything they do.

This was the message he sent out to pupils at an NDP Youth Dialogue held at Merrifield College in East London on Saturday, 31 August. Those who attended were members of The President’s Award, a youth empowerment NGO that co-hosted the event. Speaking via a live video call, Manuel encouraged the youth to take the initiative to improve conditions in South Africa. He added that it was up to them to make a difference as they would become the country’s leaders by 2030. “If we do not see ourselves as active citizens then we will not realise the aims set out in the NDP.”

He asked the pupils where they wanted to see South Africa by 2030 and how they would fulfil their aims. He turned to the NDP’s vision to provide suggestions: “We want to rid the country of poverty and we want to lessen the gap between rich and poor.” Manuel also emphasised the importance of developing South Africa’s technology to help to meet its goals. However, he said the country would have to catch up with the rest of the world and later keep up with them.

Petrus de Kock, Brand South Africa’s research manager, explained just how important the youth’s interaction with the minister was, especially since it was on a topic that determined their future. “Let us see what you can contribute in terms of ideas and in terms of questions. We also need to challenge not just the document but ourselves as well.”

The principle of development underlying the NDP enabled citizens to live their dreams, develop their skills and their interests, he said, adding that their development as individuals contributed to the development of society.

Getting youth to be active citizens

Brett Malila, the programme manager of The President’s Award, said the NGO hosted the dialogue to find ways to get young people involved in the bigger picture outlined in the NDP. Some of its members, he said, did not see the effects of their efforts and therefore questioned their need to participate in service. “You do service because you are part of a bigger picture. And being part of it necessarily means you are part of the NDP.”

Formed as part of the Duke of Edinburgh’s International Award 30 years ago, The President’s Award encourages members to take up a new skill, partake in any physical recreation, and embark on an “adventurous journey”, which usually entails a hike as long as 48 kilometres. Malila said any skill, from web design to first aid, was accepted as long as it was done in a formal manner. “You might have someone who is struggling with maths and does extra maths and that is good enough for us. There is flexibility because each person’s programme is different.”

Once the member completed the programme’s three levels, they received a badge and certificate signed by President Jacob Zuma and Prince Philip, Duke of Edinburgh. However, Malila said they gained personal qualities that were more important than the accolades. Most participants undertook numerous challenges that would test their perseverance, dedication and self-reliance, which Malila said resulted in a positive change of character. “Teaching [youth] to rely on themselves is probably the best thing in this day and age. And I think that is what our country needs at the moment.”

The President’s Award is unique in that it accepts youth from any school or tertiary institution and does not choose them based on their financial position. Malila said some members even came from care centres and correctional facilities. “It is not so much about what they have done in the past to get them in those situations but it is how they plot and plan their future that matters.”

According to De Kock, the activities encouraged by The President’s Award fit into the principles of Brand South Africa’s initiative, Play Your Part, which promotes active citizenship. “Play Your Part inspires people to move forward. The more we can implement the principle of working together, then we as a collective will cross the hurdles.”

During his address, Manuel called on three members of The President’s Award to speak about the contributions they had made to their communities.

Chantelle May, 19, a matric pupil from Victoria Girls High School in Grahamstown, is part of a committee which includes five schools from her region. They decided to address the basic needs of children living in poverty by collecting clothing, stationery and shoes. By the end of the programme the committee had collected over 3 100 items, when they had expected to reach only 300.

Nolufefe Cunu, 19, from Hillside High School in Port Elizabeth, said her committee looked to provide comfort and support for senior citizens at an old age home as well as juvenile prisoners at a local correctional facility. The committee went about cleaning and painting the old age home and providing prisoners with basic needs such as toiletries. Cunu said the idea came from a need to show the elderly and the prisoners that there were young men and women out there who loved and cared for them. “We want to encourage them and show them there is still hope. We can give them the care and the love they would not normally have.”

St George’s College student Alexandra Prins, 16, said her committee, which is made up of five schools in Port Elizabeth, was working towards creating self-sustainability for SOS Children’s Village. It chose the home after learning that most of its funding had been cut. As a result, it was unable to cope with the rapid growth it was experiencing.

It started in July, and the committee was collecting educational DVDs, toiletries and even money to buy cleaning materials and new buses. St George’s was also conducting an educational project, through which its pupils taught children from the home. At the beginning of the September holidays, the committee would donate the items it had collected.

Prins said the committee would like to expand its reach and increase its size in the future. “Every year we pick one project and do a big event for it. But in between we do not know where to go with the money. Now we have decided to help other charities, with SOS being our main benefactor.”