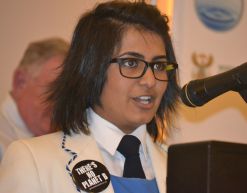 Sawef’s youth ambassador, Johara Naidoo, has called on government and business to plan for a new economy based on environmental preservation.
(Image: Shamin Chibba) 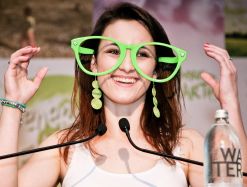 Generation Earth’s Ella Bella Constantinides says youth should put on their green glasses and look at everything with the environment in mind.
(Image: Generation Earth)

The environmental issues we face today are not just about the past; they are about the present and about the future, and they are a consequence of the past. “We leave the responsibility to you.” These sentiments, expressed by Minister in the Presidency Trevor Manuel at the Generation Earth Youth Summit on Climate Change in 2011, placed the onus directly on the youth to build a better future. They were words that resonated with Johara Naidoo.

And two years later – on 30 July this year – Johara was officially inducted as the South African Water, Energy and Food Forum (Sawef) youth ambassador at its third annual gathering, held at Montecasino in Johannesburg. The forum “raises issues of national strategic significance for debate by credible individuals, each with the deep desire to find permanent and sincere solutions”, according to its website. This year, the big debate was about water management and infrastructure. Organisers said water pricing would soon be restructured to fund a R500-billion nationwide upgrade and maintenance project.

With these water concerns in mind, Johara, a 17-year-old Grade 12 student at Parktown Girls’ High School in Johannesburg, was a fitting choice for youth ambassador, as she serves on Generation Earth’s water steering committee and is passionate about water preservation. At the forum, she spoke to government, business and environmental stakeholders about the need to plan for a new economy with a focus on conserving our environmental resources. She emphasised collaboration as the key to realising this economy. “By working together, sustainability and the shared vision of the future can take place.”

The use of coal was outdated, she pointed out, as it was meant for the development of past generations in an old economy. “By using old technologies we are not benefitting today and we are certainly not benefitting tomorrow.”

Ella Bella Constantinides, co-founder of Generation Earth, said Johara could use her ambassadorship to make youth aware of South Africa’s environmental issues. “They need to put on their green glasses and start looking at everything they can with environmental lenses.”

Indeed, South Africa is already making an effort to create a green economy. At COP17, the international climate change conference held in Durban in November 2011, the government announced its Green Economy Accord, which focuses on the move to a low carbon economy and the creation of as many as 300 000 jobs by 2020. It also suggests that by 2025, carbon emissions will be reduced by 40%.

The National Development Plan has also made provision for a green economy, detailing the steps the government will take to ensure a smooth transition from the old economy. It speaks of investing in South Africa’s natural resources, green product design, recycling infrastructure, skills and low carbon technology to make the transformation to a green economy by 2030. The plan states that the transition will be guided by 14 principles, including accountability, transparency, sound policy-making, and protection of ecosystems.

At a local level, the city of Tshwane is driving towards a green economy that will include creating green jobs for unemployed youth, constructing infrastructure for alternative energy resources, supporting high-density living in the inner city, and developing efficient waste and water management systems.

Johara’s first foray into the environmental arena was joining Generation Earth in Grade 9. She soon became a part of the organisation’s water steering committee as she felt more drawn towards water issues. “Water is an energy constraint. We will not run out of coal but we will run out of fresh water,” she says, adding that solving water issues will inadvertently solve other environmental problems. “All sectors are inter-dependent and by benefitting water you actually benefit food and energy. Nature balances things out and we should keep it that way.”

The youth are aware of the role they play in steering the country towards an environmentally sustainable future, Johara says, and they take this responsibility seriously. They are looking at ways to reduce the divide between the “world we would like to have and the world we are living in today”.

Youth see the 21st century as one in which choice is valued. “We believe this century is in our hands to choose and create. The shaping of the future as we know it depends on what we do as a collective and what decisions we make today.”

According to Constantinides, Generation Earth was established as a platform for young and vibrant individual volunteers who wanted to work on environmental issues. “Young people want to be involved but no one is taking the time to develop the skills and the passion they clearly have. For me this is a platform to get young people thinking about environmental careers such as hydro-engineering and wetland rehabilitation,” she says.

Constantinides, who was selected as one of the Mail & Guardian’s 200 Young South Africans in 2012, is a United Nations Programme Youth Ambassador. Part of her job is to create awareness about environmental issues at public events. But she felt she could do more: “I had to develop young leaders who would take over from me.”

This ambition led to Generation Earth, which she co-founded with her sister, Catherine Constantinides. “Environmental issues are always seen as dark and gloomy. But for us it is important to look at it as something cool, funky, and passionate.”

Generation Earth is a green networking platform with the youth, for the youth, by the youth. It “strives to recognise and develop green thinkers who are tomorrow’s global leaders”, explains the website. It is “a structured action plan for schools and youth to make a difference and change the world for the betterment of the environment”.

Johara says Generation Earth has found a way to make environmental awareness appealing. “It has created this idea that thinking about our environment is cool and not just for hippies.”

It works with schools, setting up school councils to help students turn their schools green. They also educate their peers on climate change, environmental impacts, conservation efforts and sustainable living both locally and internationally. Generation Earth runs projects in six African countries and has 78 school councils.

Parktown Girls High School has a Generation Earth School Council that runs a project called Green Fingers. It is a vegetable garden that feeds pupils at impoverished schools in Soweto. It has three programmes in the township – with Inkwenkwezi Primary School and Soweto primary and high schools. “During the holidays [Parktown Girls] teachers teach them about sustainability issues such as energy saving and recycling,” Johara explains.