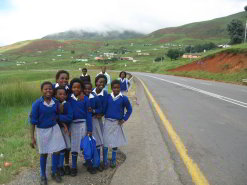 The Gauteng Department of Education is making good on its promise to step up education efforts, with 36 new schools opening and 500 additional teachers reporting for duty in the first term of 2012.

Another 300 pre-fabricated classrooms will also be added to existing schools where overcrowding is a problem.

Thirteen of the schools will be ready to accept pupils when inland provinces start their 2012 academic year on 18 January, while another five will open later in the month.

The remainder of the schools will be opened during the rest of the first term.

This brings the number of primary and secondary schools in the province to 2 595 – including independent, non-subsidised schools – with almost 72 000 teachers.

The buildup to the new school year already starts six to eight months before, with teachers required to place orders for their support materials in May and actual pupil admissions taking place from August to October the year before.

“It’s all systems go for the start of the new academic year,” education MEC Barbara Creecy confirmed at a recent press briefing, adding that the new facilities will go some way towards alleviating pressure in some of the overcrowded schools.

Of the nine provinces, Gauteng has seen the biggest rise in pupil numbers in recent years.

According to Creecy, pupil numbers has been growing on average by 2% over the last five years, which means the province has to make space for about 36 000 additional children each year.

The province has over 2-million pupils, while more than 14-million children attend school countrywide.

“There is no other province that has experienced this level of demand for learning space,” said Creecy in her mid-term budget speech last year.

In areas such as informal settlements, where it’s not always possible to build new schools, the education department has expanded its scholar transport scheme to accommodate these already disadvantaged children.

In addition a budget of R100-million (US$12.5-million) has been allocated for pre-fabricated classrooms in schools where there is overcrowding.

Maintenance work at existing schools is also ongoing, with work in progress at 42 sites.

Schools at the coast opened one week before, with the Western Cape Education Department welcoming pupils at 11 new schools in 2012. In 2011 the Gauteng education department opened six new schools.

South Africa aims to eliminate all mud schools over the next three years and to improve basic safety and functionality of about 3 600 schools by 2014 as part of its contribution to the UN Millennium Development Goals, said President Jabob Zuma during a Parliamentarian session after his State of the Nation address in 2011.

The Millennium Development Goal for education is to ensure that, by 2015, the majority of children all over the world are able to access and complete a full course of primary schooling. The government also hopes to increase enrolment rates in secondary schools to 95% by 2014.

According to basic education minister Angie Motshekga, concerted efforts on the government’s part has resulted in rises in gross enrolment rates by 20% in primary education and about 15% in secondary education.

Steady gains have been made since 2002, yet the number of young people not studying remains unacceptable – most respondents indicated that this was for financial reasons, a situation that the government is addressing. The right to basic education is entrenched in South Africa’s Constitution.

Just in Gauteng alone, almost 900 000 learners are attending the 1 237 no-fee schools, said Creecy. Of these children, over 800 000 also benefit from the government’s nutritional programme.

Nationally, Statistics South Africa recorded that the percentage of pupils countrywide who paid no tuition fees increased from 0.7% in 2002 to 54.6% in 2010.

“Almost 74% of this budget will be spent on salaries for teachers, school administrative staff and office based personnel,” said Creecy.