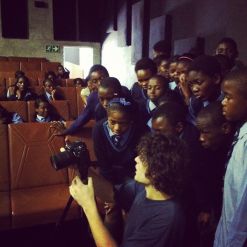 Film + School is a film awareness and appreciation initiative run by The Bioscope Independent Cinema and the Goethe-Institut South Africa to introduce youngsters to the art of filmmaking. (Image: The Bioscope)

Ponte City is still the tallest residential building in Africa, a position it’s occupied since 1975. The unusual round, hollow-centre block of flats in Berea, in Joburg’s inner city, is home to 4 000 people, many of them migrants from across the continent.

Their perspectives on how they are viewed in post-apartheid South Africa are explored in a poignant documentary, Africa Shafted: Under One Roof, which begins this year’s Bioscope Film + School cinema education series for inner city schoolchildren. The programme begins on February 6.

Now in its third year, Film + School is a film awareness and appreciation initiative run by The Bioscope Independent Cinema and the Goethe-Institut South Africa to introduce youngsters to the art of filmmaking. The programme targets primary and secondary schoolchildren from under-resourced schools in the inner city such as Mahlasedi High School, New Model Private College and Metropolitan College.

It has been designed to be as broad as possible to give the children an opportunity to engage in a wide range of film genres and structures, including fiction, documentary and animated film. This allows them to become familiar with the different modes of storytelling of the medium.

“In the past, we looked at all the different kinds of animation and then we tried to make it interactive by bringing industry experts to talk to the kids,” explained The Bioscope co-owner, Russell Grant.

“We had a guy who did a demonstration on animation and explained to the kids exactly how it works. How you take one photo and you move an object. Then you take another photo, and when you put the photos together you can see the object move.”

Using the film as a starting point, the screenings involve discussions with the children. These are intended to encourage them to interrogate the subject matter of the film and the way in which it has been made. Discussions are on a wide variety of topics, including HIV and Aids, race, sexuality, gender, and migration. They are facilitated by Puleng Plessie, who approaches the schools and manages the relationship between the project and the schools.

This year’s programme, which runs from February 6 to March 20, will introduce the children to the world of documentary filmmaking through five South African documentaries: Africa Shafted: Under One Roof (2011), Cradock Four (2011), Taking Back The Waves (2005), The Creators (2011) and Afrikaaps (2010). The topics they cover range from exploring life in the inner city and a history of the struggle against apartheid, to surf culture and an exploration of South African youth culture.

Each screening is to a full house, with about 62 children attending each session. The screenings take place every Wednesday at 11am. “We are looking to do a season for every school term. Since we started in February 2011, the seasons have run across a few months,” said Grant.

Making their own films

In 2011, the Bioscope worked with Nigerian filmmaker Akin Omotoso to make a film together with the children on migration. “We got them to [each] bring an object which they felt represented their belonging in any shape or form,” he explained.

They were filmed presenting their objects to the rest of the class. These presentations were then cut into a film, which was later shown to the children. “They loved it because they got to be a part of a filmmaking process, which was fun … The film never had a formal name, other than The Belonging Film. We hoped to have them learn about what it means to belong to something as well as how one prepares and acts in front of a camera.”

In November last year, The Bioscope and the French Season South Africa ran a project called the Home Movie Factory. It allowed members of the public, including the Film + School students, to make their own movies. Conceptualised by French filmmaker Michel Gondry, the Home Movie Factory was a collection of 12 film sets that each reflected an aspect of Joburg life, ranging from a downtown street to a Highveld campsite to a mine-shaft.

Participants drove cars that didn’t move; flipped switches to change the time of day and played with other interactive elements to tell their stories. The idea was that any member of the public, for free and for fun, could come into the factory and make his or her own movie.

“So there’s a range of sets and props and you make a movie. So the kids came and made their own films,” said Grant. “We wanted everyone to take part and it was very important that the same inner city school kids also made use of the Home Movie Factory.”

The films made at the Home Movie Factory were not necessarily for the public, but the children themselves left with a copy of the movie they had made, he added.