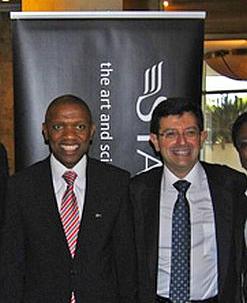 Spending time at the movies with friends is an activity that’s generally enjoyed by young people all over. This Sunday, 13 May, 15 000 high school pupils from all over South Africa will be doing going to the movies not only for pleasure, but also to learn vital lessons for their future financial wellbeing.

A new movie called Smartbucks mind your moolah has been released by Stanlib, one of South Africa’s leading investment managers. The aim is to teach pupils about financial literacy, an important element of life skills that is lacking in the current school curriculum, according to the company.

Stanlib felt this could be done in a fun, exciting way that young people would enjoy and relate to.

“Each year, over 550 000 pupils write matric exams and go on to enter the labour market without an education in basic financial skills such as saving and investing,” CEO Thabo Dloti said.

The film follows the story of two young up-and-coming rap artists whose lives are complicated by a loan shark demanding money that they borrowed from him. They have to avoid him at all costs while they try to raise this money, getting caught up in a few sticky situations in the process.

Interlaced into this angle of the story is an insightful interview between an accredited financial educator and the character played by Toll Ass Mo, on the different aspects of personal finance.

The movie will be screened simultaneously every Sunday until 10 June at major Ster-Kinekor movie theatres in Gauteng, Western Cape, Eastern Cape, Free State, Limpopo and KwaZulu-Natal.

The project’s ambassadors, popular 5fm presenter Gareth Cliff and TV personality Fikile Moeti, will also interact with the pupils at some of the screenings to get feedback from them as well as to answer questions arising from the movie.

Dloti said while Smartbucks will educate pupils about spending, the Stanlib staff also hope it will change their attitude towards money.

“We want this initiative to grow and develop for years to come, which is why we have partnered with the Department of Basic Education, Primestars and other institutions.”

Stanlib chief economist Kevin Lings said while South Africa has one of the most developed financial services industries in the world, the country’s savings rate is alarmingly low when compared to other emerging economies.

China’s savings rate, for instance, constitutes about 50.6% of the country’s GDP, while South Africa’s savings levels are at a mere 14.7%.

“South African household debt has risen by almost R900-billion in the past 10 years, or at an annual average rate of over 14% per year,” said Lings.

In contrast, household income has risen by 10.5% per year over the same time, which means that households have lived beyond their means for the past 10 years, he said.

Financial grounding at a young age

“The problem stems from insufficient financial grounding at a young, impressionable age,” he said.

“Research indicates that few school leavers are able to properly plan and manage their finances and most are unsure about how to use financial resources when they enter the labour market.”

The ratio of household debt to household income has increased from around 52% 10 years ago to 75% at present.

“Fortunately, interest rates have fallen to their lowest level since 1974, which means that the interest cost of servicing debt has eased,” said Lings.

“But the increased cost of electricity, transport, food, education and medical services combined with the current low level of personal savings means that households are now especially vulnerable to any further economic shock.”

Experimenting with an entertainment tool such as a movie in a theatre setting creates room for fun, along with learning.

“Qualitative research has indicated that participants find this learning environment very stimulating and as a result, concentration and message retention are improved,” said Sweet.