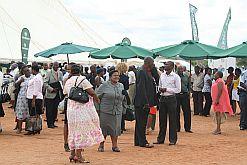 The community of Ga Masemola in
Polokwane came out in numbers to
celebrate the launch of the 2012
Nedbank Back-to-School campaign. 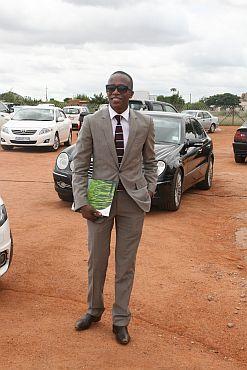 Through his own foundation, Lupi Ngcayisa
has collected over 70 000 school shoes
since 2009, with the aim of improving
the confidence of underprivileged pupils. 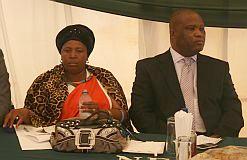 Kgoshigadi Masemola, the tribal chief
of the community of Ga Masemola and
Namane Dickson Masemola, MEC of
education in Limpopo, were in attendance.
(Images: Ray Maota)

Nedbank‘s 2012 Back-to-School campaign is giving underprivileged pupils the pride to go to school with all the resources they need to make a success of learning.

At the launch ceremony, held on 24 January at Thabanaswane Primary School in Ga Masemola, Limpopo province, 150 pupils from four schools in the area received essential school items such as uniforms, shoes, stationery, books, bags and sports kits, to start their school year on a high note.

Kone Gugushe, Nedbank’s divisional executive for corporate social responsibility (CSR), said: “Education is one of our CSR focus areas and we are delighted to partner with the Department of Basic Education to ensure that all pupils are able to focus on their studies rather than worry about the lack of school resources.”

Gugushe said the back-to-school campaign aims to give disadvantaged pupils an equal opportunity to be the best they can be.

“We are gathered here today because we know the importance of education and the role we have to play to ensure that you get the best education possible,” said Ciko Thomas, managing executive for consumer banking in Nedbank’s retail division.

Limpopo province was chosen first because of a link between Ga Masemola and certain fund-raising efforts in Johannesburg.

Nicholas Mampana, a shoe-shiner at Nedbank’s head office in Sandton, hails from Limpopo. He’s worked there for the past nine years and managed to raise R124 000 ($15 600) through Nedbank’s Retail Staff Volunteerism Programme, which encourages staff to use their time for worthy causes.

Nedbank added another R100 000 ($12 500) to the amount raised by Mampana, who chose two of the back-to-school beneficiaries.

Mampana said: “In 2002 I met the director of Nedbank at the Hilton Hotel where I used to work and he told me he wanted me to work at their offices.

“I saved some money from the tips I received, as I remembered how I used to feel going to school with no shoes in my hometown of Ga Masemola. This is why I’m here today making sure youngsters in my community don’t go through what I went through.”

Mampana said although he used to meet international stars and bigwigs while working at the Hilton, and loved his job there, he doesn’t miss it because it didn’t afford him the opportunity to help his community.

MEC Masemola said: “Nedbank has shown its commitment to education every year and I would like to take this opportunity to say we appreciate the work they do.”

Thabanaswane Primary had one block of classes with only four classrooms and four ablution facilities when Obed Tshebetshebe became principal in 2006.

Tshebetshebe applied to the Nedbank Foundation for assistance in improving facilities.

Two years would go by before Tshebetshebe received a call in 2008 saying the foundation would donate R496 400 ($62 000) to build another block of classes.

This container has educational toys and is used to house Grade R pupils.

Ngcayisa, the founder of the Lupi Ngcayisa Foundation, has been collecting school shoes for underprivileged pupils since 2009.

Ngcayisa said: “Our selection process looks at the poorest of the poor and we have a bias that favours pupils from rural areas and informal settlements as they have it the worst.”

He knows exactly what he’s talking about as he was raised in a shack in Walmer in Port Elizabeth.

“As a kid who grew up in a township characterised by despair, I was intrigued by a couple shopping for school shoes for their daughter in one of Johannesburg’s suburbs three years ago,” said Ngcayisa. “The young girl’s smile inspired me to seek to create or rather duplicate this delight in other children who unlike her, had never worn school shoes.”

People who would like to donate school shoes to the foundation can drop them off at their nearest SABC office, and corporations who wish to help can contact Bata Toughees and buy directly from them at a discount.