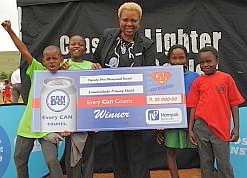 Irene Mathebula, the coordinator of the
competition at Zamintuthuko, and pupils
from the school celebrate their win.

Alex Bouwer, sales and marketing manager
at Bevcan, said that the pupils were true
ambassadors for the recycling movement
and an excellent example for others in
their community.
(Images: Ray Maota)

The youngsters of Zamintuthuko Primary School in Mamelodi, Pretoria, were on a mission this year – between April and October they collected a total of 67 500 cans.

In doing so, they won the R25 000 (US$3 100) first prize in the Bevcan Aphi Ama Can competition, a recycling initiative.

The competition was run by Bevcan Nampak to encourage children to recycle, reuse and reduce waste. Over 100 schools took part in the competition, which ran from 1 April to 30 September 2011.

Bevcan is the can-making division of Nampak, one of South Africa’s largest packaging companies. It is the only beverage can manufacturer in sub-Saharan Africa.

A total of 542 045 cans were collected during the competition.

Setting an example for the community

Irene Mathebula, the coordinator of the competition at Zamintuthuko, said: “We are all absolutely delighted to have participated in this competition, which aims to educate not just our pupils but us as adults as well.”

Mathebula added that because they exceeded the expected number of cans collected per child, they have gained the confidence to “take on any challenge as a school”. Each child was able to collect at least 169 cans.

The prize money will be used to build a school hall, so that the children will be safe from the elements during assembly or other school events.

The prizes were presented at a ceremony held at Zamintuthuko Primary on 1 December 2011.

Alex Bouwer, Bevcan’s sales and marketing manager, said: “It is with great pleasure that we are gathered here today to recognise the environment-responsible behaviour of these young people.

“You are true ambassadors for the recycling movement and are setting an excellent example for others in your community.”

The three runners-up – Thathani Primary School from Zola North in Soweto, Mononong Primary in Mamelodi East, and Ikwezi Primary from Mofolo in Soweto – each received R25 000 ($3 100) for their efforts.

Ikwezi Primary rounded off the top four by collecting 13 000 cans, with each scholar collecting 52 cans.

Louis Taylor, director of private-public partnerships at the Department of Basic Education, said the department has set up public private partnerships, like the one with Bevcan Nampak, to assist it in bringing quality education to people.

“While we have international people in the country talking about saving the environment at COP17, these schools are not talking but are playing their part in its preservation.”

While Nampak Bevcan’s core business is making cans, “we are also committed to improving the learning environments of our children”, said Bouwer.

The company is very involved in a variety of education programmes.

Early this year, the company donated R8.5-million ($1.12-million) towards education through its Every-Can-Counts campaign: Nampak contributed R5-million ($701 000), while a further R3.5-million ($492 000) was raised through the sale of specially marked cans.

Nampak Bevcan MD, Erik Smuts, thanked all those who supported the education campaign: “We are very happy with reaching the R8.5-million ($1.12-million) mark and we thank the many people who supported the cause by purchasing beverage cans.”

Nampak will be running four competitions in 2012 to give schools and individual scholars the opportunity to raise funds and make a difference in the environment.

The competitions are for schools to collect cans, an art project highlighting recycling, the creation of an artwork out of recycled cans, and a Guinness World record attempt at collecting the most cans in a month.

The National Schools Competition, worth R750 000 ($93 000), will see schools winning monthly prizes, as well as annual prizes for the number of cans collected.

The Artistic Expression Competition invites individual scholars to draw, paint, sculpt or even write about how one can make a difference by recycling.

The Can Craze Competition gets children to build a structure out of cans, while the Guinness World Record attempt will see groups try to collect the most cans in a month.

The competitions will help raise funds for schools and individuals, “so make sure you enter these competitions first thing in the new year”, said Bouwer.