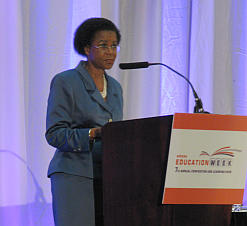 Dr Mamphela Ramphele pointed out defects in the national education system, and said that her new political party Agang has the motivation to address them. 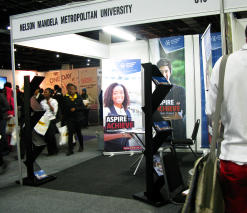 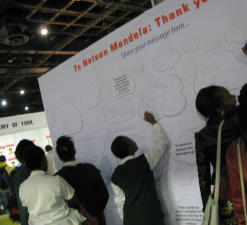 The event is one of the continent’s biggest education conferences and exhibitions. It puts the spotlight onto the education system in South Africa, and features workshops for teachers, panel discussions with experts, and an exhibition showing off the latest in teaching and learning technology, all aimed at improving the standard of education in the country.

The Career Expo, which runs alongside the event, targets high school students who are trying to decide on the path their lives will take in terms of employment and a career. It has its own exhibition where pupils can find out about the options offered by tertiary institutions, scout around for bursary and finance opportunities, and gather information that will allow them to make informed decisions about their future studies.

On the first day there were over 600 visitors and delegates to the event, as well as 2 100 pupils. They thronged the exhibition hall, chatting to exhibitors and putting brochures into their bags by the handful – clearly determined to make the most of the occasion.

Exhibitors included the departments of basic education and higher education and training, the National Youth Development Agency, the Adopt-A-School Foundation, BrainBoosters, the Healthy Schools Project, My Maths Buddy, universities, colleges and technikons, and many more.

In the conference hall, delegates listened to the likes of education specialist Graeme Bloch, Louise van Rhyn, executive director of non-profit organisation Symphonia, which works to improve South African society, Prof Johannes Cronjé, dean of the faculty of informatics and design at the Cape Peninsula University of Technology, entrepreneur Kelly Ritchie from Australia, Gavin Keller, the inspirational principal of Sun Valley Primary School in the Western Cape, and Ramphele, who has just entered the political arena with her newly launched political party Agang.

There was no representation from the public sector among the main speakers – basic education minister Angie Motshekga delivered a speech at the opening of last year’s event.

“Education is one of Africa’s great missed opportunities,” said Ramphele in her keynote speech.

She spared no harsh words for the national education system, saying that it has failed South Africa’s young people on a “massive scale”. The country has not and is not investing enough in quality education, she said, despite the fact that the sector gets the biggest slice of the national budget – R232.5-billion (US$22.9-billion) in 2013.

“Business leaders know the value of education in creating capable and productive employees, and they often invest in their people,” said Ramphele, a former vice-chancellor of the University of Cape Town.

She didn’t waste the chance to give the rapt audience a few hints concerning Agang’s education policies, saying that the party would make education one of its core focus areas and live up to the principles and goals of the freedom struggle – quality education for all.

“We will aim to become one of the top 10 education systems globally, and we will immediately raise the bar by insisting that no child will pass with less than 50%. We will also link teachers’ pay increases to their competency, and we will hire 15 000 more teachers, focusing on unemployed graduates.”

There is no political will to solve the current problems of the education system, she said, and this is the key issue. Another major challenge is the substandard quality of teacher training and teachers themselves, a problem which has not been addressed in the 20 years since democracy.

“True freedom begins with a quality education,” Ramphele said, “and Agang will provide young people with the tools to escape poverty.”

The basic education department has since rebutted Ramphele’s remarks, claiming that she does not understand nor appreciate the education sector, which is “complex” and an area unsuited to “grandstanding”.

Louise van Rhyn of Symphonia said that one of her organisation’s focus areas was to harness the skills and expertise of business leaders and transfer these to school principals and staff.

“We have world-class business practice, so we need to bring that into South African education.”

The key success factors for change, she said, would be a confident leader in every school, an aligned team and a shared and co-created vision. But too often the principals are former teachers who have been thrust into the leadership role with no training or preparation.

“No one cared enough to teach them, so they are lonely and anxious, but need support.”

This is where Symphonia comes in, bringing experienced business leaders – and their connections – and the principals together, where the latter have the chance to absorb business knowledge and leadership skills, and build up a network of contacts to help with every scenario or school emergency.

“Education is also a societal responsibility,” Van Rhyn said, “and we can’t keep looking to the government. The business sector wants to be part of the answer – we have 75 organisations already involved around the country.”

The whole world now has access to information, said Cronjé, and so the role of teachers and lecturers has changed – they are no longer the sole providers of information.

“We don’t need to teach them the information, but rather, how to access it. This is where blogs, Facebook, Twitter and other platforms can be of use.”

Cronjé mentioned a time when, because of technical failure at the university, he took to teaching via his students’ Facebook group. “And it worked – a student was just then at a conference where one of the speakers was someone whose work we had discussed – he asked if I had any questions for this person. Another was sick at home, but she could still follow the class.”

Contrary to popular belief, today’s youngsters don’t know everything about technology, he said. They still need lessons in how to get the most out of it.