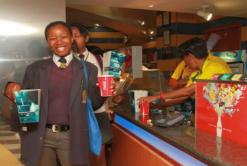 Matric pupils line up to get their movie snacks, at an EduC8 event. 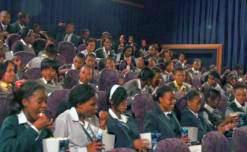 The EduC8 initiative puts the fun into revising maths and science.
(Images: Edusynergy)

Local mobile operator 8ta has teamed up with other corporate partners and the Department of Basic Education to take EduC8, a nationwide matric maths and science revision campaign, to more locations across South Africa.

What makes this programme especially interesting is that the revision programmes are screened simultaneously at several Ster-Kinekor theatres across the country. Following the screening, students are then able to interact with, and pose questions to subject advisors present at the screenings.

Launched in July 2011, EduC8 is a partnership between 8ta, BHP Billiton, marketing firm Primestars, the Department of Basic Education, Samsung and the National Youth Development Agency. In 2012 chemicals manufacturer AECI and training company Sakhisisizwe have come on board to enable the programme to be screened in more locations, including eMalahleni (formerly Witbank), Richards Bay, Polokwane and Kuruman.

The latest screening took place at Ster-Kinekor in Sandton City, north of Johannesburg, where officials from the various sponsors as well as science and technology minister Naledi Pandor joined over a hundred matric students early on a Sunday morning.

To the delight of the students, the organisers also roped in popular local entertainer and comedian Mpho “Pops” Modikoane, as well as Miss South Africa Teen, Celeste Khumalo.

According to Primestars MD Martin Sweet, the schools taking part in the EduC8 programme are chosen by the department – though they can also be added through the request of a sponsor – and the more sponsorship that the programme can secure, the greater the number of schools can be accommodated.

Addressing the students to huge cheer, Pandor said that South Africa could not become a world class country if its young people were uneducated. “One of the most important tools for human development is education,” she explained.

She gave statistics about the declining number of students in the country who are taking maths and science as matric subjects, as well as the importance of performing well in those subjects.

“We face the task of providing a huge number of educated people who can tackle the challenges that we face,” she said, adding that it was only through a highly educated workforce that South Africa could compete with its peers in the developing world, like Brazil, India, China and others.

Making history with the SKA

Pandor told the students that South Africa recently made history when it was chosen to host the majority of the Square Kilometre Array, which when completed will be the most powerful radio telescope in the world. A smaller portion of the telescope will be built in Australia.

“This is an amazing victory for South Africa and Africa, because for the first time, the continent will host global research infrastructure,” she said, adding that there isn’t such a powerful telescope elsewhere in the world.

“By the time we construct it in 2016, most of you will have graduated, and I hope that some of you will be scientists, engineers and astronomers on the project,” she said.

She concluded by telling the students that they had made a wise choice by choosing to study maths and science, and urged them to work hard.

“You will become the stars of the future,” she said.

Miss South Africa Teen Celeste Khumalo called on the students to pay attention to their teachers, and to ask them for help where needed. She said that she was in a similar situation not too long ago, where she was leaving school and had look for bursaries and make decisions about what career to follow.

“When you have nothing to do, you should be studying,” she told them. “Don’t be sitting down doing nothing.”

Mpho Pops spoke of the importance of maths in today’s world, illustrating through several jokes that even taxi drivers needed to be good at maths so they’d know whether all the passengers had paid or not.

He said that that EduC8 was a great initiative where students could be bussed in and be able to enjoy entertaining revision sessions on the big screen, and urged students to take full advantage of the opportunities presented to them.

Before leaving, he made a lasting impression on the students: he first asked them how many of them had plans for what they would do if they won the Lotto – and most of the students raised their hands. When he asked them again about how many had a plan for studying hard, going through university and becoming successful through their work, far fewer stepped forward.

His point being made – and understood by the assembled students – he added: “Don’t plan for Lotto, plan for your life.”

Pieter Spies, Telkom Mobile’s MD for sales, said that maths and science played a vital role in the development of the country, and that they were fortunate to have several corporate partners, as well as the department, who were supporting the EduC8 initiative.

“We believe public-private partnerships are needed to drive skills development in the country,” he explained.

Representatives from other sponsors, including BHP Billiton and AECI, also addressed the students, urging them to study and work hard toward developing their future, and calling on them to consider bursaries, internships and other opportunities available at the respective companies.

“We are looking for mining engineers, geologists, geophysicists, chemists – our tagline is ‘resourcing the future’, and we believe that you are part of that future,” said Kevin Morgan from the BHP Billiton chairman’s office.