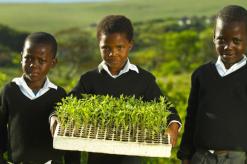 South Africa’s future generations will
grow up with a deeper understanding
and respect for the environment,
thanks to Eco-Schools.
(Image: Green Renaissance)

Grade seven pupils at Seripe Primary School in Mopani, Limpopo province, look with new eyes at the prolific birdlife in their area.

After participating in National Birdlife Week as part of their Eco-Schools theme project in 2011, these children now have a basic understanding of how to identify birds and have learnt the value of trees in attracting birds to an area.

The school joined the Eco-Schools programme, run by the Wildlife and Environmental Society of South Africa (Wessa) and the World Wide Fund for Nature (WWF-SA), five years ago.

It earned its Eco-Schools flag in 2011, an international award given to qualifying schools as a symbol of excellence after successfully maintaining environmental themes for five years.

The school is one of 1 200 registered in South Africa with the programme, which is run under the auspices of Wessa.

Eco-Schools is an award-winning international programme started 15 years ago by the Foundation for Environmental Education, an NGO promoting sustainable development through environmental education.

South Africa joins 51 other countries from around the world in providing school children with this innovative environmental learning programme which slots in perfectly with the normal school curriculum.

Elsewhere in Africa, Kenya, Uganda, Morocco and Tunisia have also joined the programme.

First introduced in South Africa in 2003 with a membership of 100 schools, Eco-Schools exposed about 500 000 pupils to environmental learning, some for the very first time, during 2011, and is set to keep growing.

Twenty-five of the original schools remain with the programme today while half of the schools which have joined up in the last three years are still participating.

According to WWF-SA, shopping centre investor Pareto Limited and Nedbank’s Green Trust became the national funders in June 2010, after packaging company Tetra Pak had funded Eco-Schools since its inception.

The Petroleum, Oil and Gas Corporation of South Africa recently pledged R4.5-million in additional funding, over a three-year period.

“We understand the need to preserve our environment for future generations,” said the company’s head of corporate affairs, Kaizer Nyatsumba. “The beauty of the programme lies in the fact that it exposes young people to the importance of responsible environmental custodianship.”

The success and uniqueness of the programme is linked to its alignment to the school curriculum, says Bridget Ringdahl, Eco-Schools programme manager.

Eco-Schools supports the national curriculum statements for grades R to nine and grades 10 to 12.

“The key is that it provides a framework to enable teachers to highlight aspects of environmental learning that can be found in many of the subjects, giving more meaning to classroom learning.”

In addition, many schools align their programmes to national and international awareness campaigns such as National Water Week, World Wetlands Day, Arbor Week and others.

Wessa requires schools to supply a portfolio of the work done showing meaningful links with the curriculum, and relevant action taken. With each year, schools add a new theme, while still maintaining the original theme until they receive the ultimate form of recognition, the international eco-schools flag.

Available themes include resource use; nature and biodiversity; local and global Issues and healthy living, among others.

The main theme for 2012 is Sustainable energy for all and is open to schools with international status.

The programme is voluntary and any school may join: pre-primary, primary and secondary, as well as schools for children with special needs, home schools and environmental clubs.

Over the years some innovative eco-projects have seen the light at schools in South Africa, such as a full audit on water usage and wastage at St Nicholas School in Pietermaritzburg, KwaZulu-Natal, conducted entirely by pupils.

The Dikolobe Primary School in Limpopo received international recognition in 2011 when a German film crew recorded their projects involving vermiculture, permaculture, solar cooking and removal of alien plants. These were also showed off at the recently concluded COP17, in Durban.

Where funding is available, Wessa assists schools in less affluent areas to get the programme off the ground. Often, these schools benefit the most from Eco-Schools participation.

The experience of pupils at Seripe Primary highlights this point. Pupils in this area are not usually encouraged to walk, hike or explore their local eco-systems, and consequently receive little external stimulation as part of their formal education. Yet, with the bird watching theme, they learned how easy it can be to be aware of environmental issues right on their doorstep.

And although birding can be a solitary activity requiring great patience and concentration, the pupils surprised teachers and Wessa coordinators with their growing enthusiasm.

Wessa received this feedback from coordinator Shelley Milstein: “It was astounding to see how much they enjoyed going out into nature, and how their eyes were opened to the diversity of birds.”

Pupils got more excited with each day, and started to focus not only on the birds, but also on the trees and small animals around them. Besides identifying birds, the school also embarked on gardening, managed to reduce water and electricity consumption, and learned about indigenous trees as part of its Eco-Schools theme for 2011.

As part of the project, pupils have to observe a variety of plants over a period of time, recording the influence of weather and temperature changes on the leafy subjects. Their findings are sent to SAOEN, giving them their first experience of real scientific research.

They have been in the Eco-School programme for seven years and studied forest biomes in 2011 as one of their eco-themes.

Likewise, Bosko Christian School, near Hermanus in the Western Cape, studied a nearby estuary during National Wetlands Awareness week and noted a decline in the number of frogs after the busy festive season.

The school reported back to Wessa that pupils came away with a greater awareness of the frog’s important role as an indicator species in wetlands, and the visible impact humans have on wetlands.

The children were also made aware of the Volunteer Western Leopard Toad Project, a unique initiative that ensures the safe passage of the western leopard toad on roads in Cape Town and the surrounding plains during spawning season. The leopard toad is endangered and is a protected species.