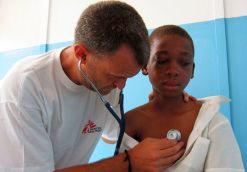 An agreement between the KwaZulu-
Natal provincial health department
and Cuba will make it possible for
more South African students to
qualify as medical doctors.
(Image: redorbit.com)

An agreement between the KwaZulu-Natal provincial health department and Cuba will make it possible for more South African students to qualify as medical doctors.

The department’s agreement with the Caribbean island country will allow more South African students to study medicine in Cuba.

This collaboration with Cuba forms part of the South Africangovernment’s drive to address the critical shortage of medical doctors in the country, particularly in the public health sector.

A blueprint for healthcare

The Cuban healthcare system is respected worldwide and is seen as a model for developing countries.

One of the main drawcards of Cuba’s approach is its achievements in primary healthcare and proactive disease prevention in a country with a large rural population.

In a recent interview with the Stanford School of Medicine, well known physician and author Paul Drain says although Cuba operates on a limited budget, the country has managed to provide its citizens with effective, affordable health services.

Drain says that Cuba has one of the most active programmes in disease prevention in the world. The system offers prenatal care and its vaccination rates are some of the highest in the world – higher than in the US.

“It is a system that doesn’t get too much attention and perhaps it ought to,” he says.

According to the World Health Organisation (WHO), Cuba has the highest doctor-patient ratio in the world. However, WHO statistics for 2010 put South Africa’s doctor-to-patient ratio at eight doctors for every 10 000 people.

About 40% of the country’s doctors are serving 85% of the population who use the public health system. This is according to a discussion document on South Africa’s proposed national health insurance scheme.

The South African government is taking a leading role in improving healthcare in South Africa.

Plans are going ahead to set up a national health insurance system (NHI), a first for South Africa. The aim of the NHI is to ensure equal access to health care within the country and address under funding of state health facilities.

This plan includes building a new medical school in Limpopo to increase in the number of medical students who receive training every year.

KwaZulu-Natal health MEC Dr Siboniseni Dhlomo says South Africa will experience a shortage of doctors in the next 15 years, unless more are trained.

Dhlomo says the combined intake of South Africa’s eight medical schools can only accommodate 2 000 students. Each year many aspirant medical students with good potential are turned away.

According to Bertha Peters-Scheepers, senior manager of public relations and service delivery at the Health Professions Council of South Africa, about 1 200 medical students graduate annually.

Peters-Scheepers says there are a number of reasons for the shortage of doctors in South Africa: the migration of doctors abroad; working conditions in public sector hospitals, and a shortage of medical schools.

“Unfortunately medical schools cannot up their intake of students as the Health Professions Council has strict student- lecturer ratios,” she says. “This policy ensures that our graduates are sufficiently qualified to deliver a high quality of healthcare to the South African public.”

The government’s new human resource strategy proposes an increase in the number of medical students who receive training every year, and more investment in training facilities and nursing colleges.

Primary healthcare is a core focus of the plan. The department hopes to improve primary healthcare facilities by increasing the number of nurses in schools and municipalities to prevent people from having to go to hospital.

As part of the new agreement, students will have to pay their own tuition fees, but the government would pay for students’ other expenses such as airfare.

Over the past 15 years the government has annually sponsored the full costs of about ten medical students from each province to study in Cuba.

According to the KwaZulu-Natal health department, the South African-Cuban Medical Training programme was initiated in 1998.

The programme was established as a solution to the dwindling number of medical doctors in the public health sector.

The department says that 246 medical doctors have qualified through the programme and are currently employed in different health facilities throughout the country.

The candidates for the programme are mainly recruited from rural, under-serviced areas. When students graduate, they are placed in outlying rural areas where healthcare services are desperately needed.

A total of 388 students are still undergoing training in four medical schools in Cuba, including those who are learning Spanish at the language institute in their first year of study.

Dr Vusumzi Mehlo, an intern at Mahatma Gandhi Memorial Hospital in Durban, says his six years of study in Cuba had prepared him well to become a doctor, and he learned a new language too.

According to the Medical Education Cooperation with Cuba (Medicc) a non-profit organisation that supports education and development of human resources in health, South African doctors training in Cuba leave well equipped to serve their communities.

They come from the poor communities where they return to work, and speak their patients’ language. Cuban-trained doctors also have the added advantage of learning Spanish, an extra skill for communicating across borders.