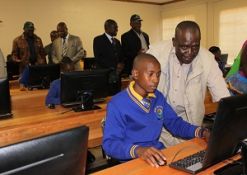 A computer lab worth R820 000 has been handed over to Masiza High School in Mbaula, Limpopo. 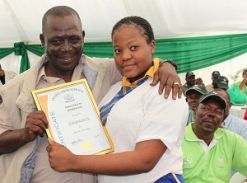 Grade 12 pupil Khanyisa Chauke thanks SANParks on behalf of the students and hands over a certificate to Mr Sibiya.
(Images: SANParks)

A computer laboratory for Masiza High School in Mbaula, Limpopo, worth nearly a million rand; an administration building at Dumisani High School in Cork, Mpumalanga, worth just over two million rand – these are just two of the corporate social investment (CSI) projects of South African National Parks (SANParks).

The group’s CSI programmes focus specifically on improving the lives of people neighbouring its wildlife reserves. “In the past, our approach to community development was more of providing access to benefits that accrued from our business,” explained the Kruger National Park’s managing executive, Abe Sibiya. “We have now added the issue of corporate social investment whereby we have begun to provide facilities and resources that can benefit the whole community.”

A total of R820 000 ($81 390) was spent on 32 computers as well as the refurbishment of the building in which the computers are kept at Masiza High School. The aim was primarily to benefit the pupils, but also to help the community of Mbaula Ranch as a whole. “The school applied for the project and on the basis that we are today living in the information age, a computer lab was the most appealing to us,” said William Mabase, the head of public relations and communications at SANParks.

CSI is not the only way SANParks is promoting education. The organisation introduced its Social Ecology Programme in 1996, which was aimed at creating opportunities for communities that surrounded national parks so that they could also benefit from the parks’ activities. “Since then, communities have been benefiting in many ways, but in 2012, after SANParks adopted a new vision of ‘SANParks connecting to society’, the CSI department was created to give effect to the new vision,” explained Mabase.

The aim was to uplift the standard of living of people, especially those in poor communities. According to SANParks, for the next five years its CSI programmes will focus on education through the provision of required infrastructure, libraries, science laboratories, extra classes as well as water tanks. At Dumisani High School, for example, R2.2-million ($21 8383) was donated for the new administration block.

For poor and rural communities, SANParks has pledged to support the implementation of programmes that promote access, benefit sharing, and socio-economic development towards the improvement of communities next to national parks. Environmental education is crucial in this context.

SANParks has various programmes in place to teach students and equip them with skills to take care of the environment in which they live that attract more than 170 000 pupils a year. Through its Kudu Green School Initiative (KGSI), for example, students are taught about the significance of climate. KGSI started in 2010 and targets urban areas. These regions are targeted, Sibiya said, because residents here were not exposed to national parks and awareness of conservation. By 2012, SANParks had hosted a total of 22 808 participants, 95% of whom – 21 633 – were students. Numbering 1 175, teachers made up the balance.

Seven schools in Gauteng are involved in KGSI at present. They are learning about waste management, food gardening, recycling, water conservation and greening. KGSI is supported by the National Lottery Distribution Trust Fund and is endorsed by the Department of Basic Education.

Another programme, Kids in Parks, is a partnership between the national Department of Environmental Affairs, SANParks and Pick n Pay, the second largest supermarket group in South Africa. It provides opportunities for pupils and teachers to use national parks as learning environments. Kids in Parks workshops deal with topics such as environmental ethics on three-day sponsored tours to national parks.

Each year, Kids in Parks takes 5 000 children to parks, exposing them to activities such as mountain climbing and horse riding. According to Pick n Pay, the goal of the programme is to broaden the perspectives of under-privileged children by investing in the beauty of the land so that future generations can enjoy a sustainable environment.

SANParks also runs the SANParks Social Science Student Support Programme at the University of Pretoria, a multi-year programme that supports tertiary learning and research. Through its own initiatives and support from the National Lottery Distribution Fund, bursaries are offered to students. The programme started in 2011 and focuses on students in the social sciences and heritage conservation fields.