Teams get down to the business of learning to run a manufacturing company. 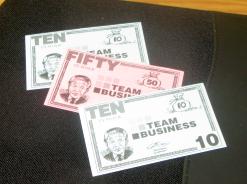 Using Madibas as currency, the young participants monitored their income and expenditure. 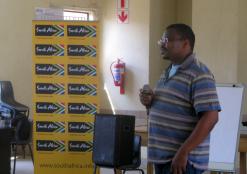 Event co-organiser Sandile Mahlaba told the kids to learn, but have fun at the same time.
(Images: Janine Erasmus)

Towards the end of August, training company Business Education Design (BED), with the support of Brand South Africa, the Movement for Economic Freedom (Mefsa) and Hope Church, held the second of what is hoped will become a regular series of workshops on teaching young people how the economy works, and what they can do to contribute to it.

The initiative, called the Youth Economic Development Clubs, aims to promote economic literacy among South Africa’s young people, who will, after all, run the country one day. It teaches them how businesses work, how the economy affects the running of a business, and introduces them to common business terminology.

“Young people need to be active participants in the economy,” said co-organiser Henry Sebata, who runs his own consulting and business support company. “But for them to be successful, we must intensify the education component.”

The event took place at the community hall in Diepsloot township northwest of Johannesburg. Sebata explained that it was part of the initiation of the economic clubs and that there had been a session held in the Johannesburg suburb of Craighall.

“Once we get the clubs up and running,” said Sebata, “the youth will run them for the most part. They’ll organise events, identify guest speakers, and promote the events themselves.”

The initiative is a long-term commitment, he said, and the organisers plan to enlist the support of the corporate sector in arranging visits to companies, securing sponsorships, and inviting prominent businesspeople to be guest speakers at meetings.

The youngsters received practical training in running a business through a course based on BED’s tried and tested Team Business range of programmes, which includes business tuition for all levels of management from executive downwards, as well as non-financial managers and entrepreneurs.

“I own a company,” said co-organiser and businessman Sandile Mahlaba, opening the session, “and as business owners we need to ask ourselves how we can work together and spread the potential to others.”

Mahlaba, a Mefsa member as is Sebata, described the organisation’s members as economic freedom fighters, and said that for young people it was more important to understand economics than to understand politics.

“We don’t want to inherit an economy that we don’t understand,” he said, “or we will mess it up.”

Mahlaba said that BED’s courses have been used extensively in South Africa and that thousands of people have gone through the programme.

The participants were divided into groups before the business simulation began. They were told that they work for a company that produces paper boxes, and that there were certain things to be taken into consideration, such as a business license, product design and equipment, before even one box rolled off the production line.

These necessities were paid for with a fictional currency called the Madiba – “more stable than the rand”, said BED director and programme designer Andrew Hofmeyr, who was on hand – which left the fledgling companies with no money in the bank.

They were soon put to work producing their first box, using a template in their Team Business workbooks. After the practice run they were given a scenario which prioritised the quantity of boxes and not quality, and the teams got cracking on their production lines.

Once they realised they would be having fun as well as learning, the participants threw themselves enthusiastically into the programme, filling the hall with chatter, observations and suggestions.

“This practical component makes the lessons come alive,” said Hofmeyr, “and it motivates the kids.”

The production task was made more complex with factors such as clients which preferred quality over quantity, the introduction of unions and work shifts, and times of low demand, which forced teams to assess their members’ performance and see if there were ways to cut costs.

The workbook took the teams through six months, or chapters, of business fundamentals, with each month focusing on a different challenge. They learned the value of marketing and technology, and summarised their performance at the end of the day by reflecting on what they achieved and what they could have done better.