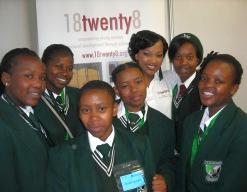 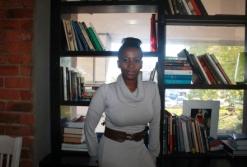 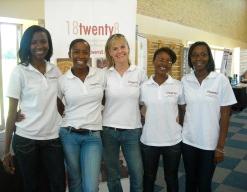 How would the lives of many adult women in South Africa have turned out if they had been guided and mentored by older professional women during their school years?

This ideology is what drives the team at non-profit organisation 18twenty8 to empower young women from disadvantaged backgrounds, giving them the opportunity to explore different life and career choices despite their circumstances.

The call to help

Founded in 2008, 18twenty8 is the brainchild of leading South African actress and philanthropist, Refiloe Seseane, who created the organisation as a result of her own personal struggles growing up.

Seseane found herself, at age 28, working as an investment analyst in Cape Town – unfulfilled and conflicted with her life choices. She made a life changing decision to move back to Johannesburg and review the decisions of the last ten years of her life – hence the name 18twenty8 – and so began her work in acting.

She has since graced television screens across the country, appearing in popular soap opera Generations and more recently The Wild, among other productions.

A separate calling however, that of helping others who may be in the same situation as she was when she was younger, was beginning to manifest itself in her everyday life.

This led to her decision to focus on young women who needed guidance towards their ideal careers.

“I had a willingness to give back to the community, and wanted to make a difference with my life,” she says.

After she was honoured with the Youth in Philanthropy Award by the Inyathelo – South African Institute for Advancement in 2010, Seseane was chosen a year later as a member of the Young African Women Leaders’ Forum, hosted by US First Lady Michelle Obama.

She is now a member of President Barack Obama’s 2012 Young African Leaders Initiative and was named one of 60 changemakers by Spark International, an Australian initiative for social entrepreneurs.

18twently8’s financial assistance programme provides beneficiaries with a variety of tools like study loans and bursaries, as well as help during the job application process.

However, the programme that Seseane is most proud of is the Big Sister Network, in which a team of older, more experienced professional women provide all-round mentorship for the young girls who join.

“I always thought that if I had guidance and advice when I was a young girl, my life would have turned out differently and consequently so would my life choices,” says Seseane.

“Parents sometimes cannot relate to what their children are going through, so they are not able to give the assurance or guidance that is needed.”

The big sisters, of which Seseane is one, encourage the young women, who are mostly between the ages of 18 and 28, to view higher education as an attractive and necessary tool for their empowerment.

To be considered for sponsorship or financial assistance, participants have to be enrolled in an academic institution and demonstrate leadership qualities, with a willingness to give back to their communities.

“Through 18twenty8, we aim to groom successful generations of women, thereby continuing our collective dream,” says Seseane. “I would like to think that, in its own small way, 18twenty8 is closing the skills, gender and race differentials in South Africa.”

Since 2009, 753 high school pupils have benefited from the services of the organisation, with 22 of them going through the Big Sister Network.

Palesa Phora (19) is one of three participants whose education is being sponsored by Deutsche Bank. She is currently in her first year of a bachelor’s degree in law and international Relations at the University of the Witwatersrand in Johannesburg.

Recalling the events of the day she received the good news, Phora says she was so shocked, she cried.

“My mother was relieved as she had been stressing about the financial burden of putting me through university.

“I have no excuse to not pass as I have been given the tools I need to get through university. I still feel a great sense of joy when I think about it. I am so blessed!”

Phora lived in Soweto with her grandparents for the first 10 years of her life, before moving to Benoni on the East Rand to stay with her mom, a single parent, and two younger sisters.

“They really look up to me and in a way, they are my mentees,” she says, referring to her siblings.

Despite her youth, Phora is already showing signs of determination. Through her education, which will later involve specialising in international law and foreign policy, she plans to use her degree to strengthen relations between South Africa and the rest of the world.

“I want to be in Parliament one day, and I want to play a role in getting the youth active in politics and educating our citizens about their constitutional rights,” she asserts.

“I just want to be very involved in getting South Africa to flourish because we do have the potential to be a great nation.”

Phora started off with many goals and dreams for her future, but much like Seseane, she was not without uncertainty. In high school, her career thoughts ranged from journalism to business and later politics.

“When I turned 16, my view of the world changed. I had dreams of being a very powerful and revolutionary woman and hoped to spread my influence throughout the world,” she says.

Her hopes of fighting for women’s rights and representing the ‘universal woman’ have remained to this day.

When she joined 18twenty8 in 2010, Phora suffered from a low self-esteem and a fear to venture out of her comfort zone. Through the organisation she received a mentor and attended events and workshops that helped her focus her ideas.

“It exposed me to various women who had faced similar challenges as me but still managed to make a success of their lives, and that gave me hope,” says Phora.

Phora believes that South Africa’s education system pressures pupils into making big career decisions by choosing their matric subjects in grade 8. However, it does not necessarily expose them to the various options available to them beyond matric, nor does it equip them for the real world.

For this reason, she says, mentors are a great help, because a mentor is usually someone who has travelled that path and is willing to guide you through it but still allows you to make your own decisions and learn your own lessons.

“My mentor gives me invaluable advice regarding my degree and shows me how I will apply my skills in a work environment,” says Phora.

“Our relationship is personal and well-rounded. She is someone I can call at any time of the day and can speak to about anything and everything.”

The Big Sister Network has made a huge difference to how she carries herself and has made a positive impact on the decisions she makes on a daily basis, Phora says.

She has advice of her own for girls in difficult situations: “Education is important. If you know better, you do better.”

This is echoed by Seseane, who says young women should go to school and stay in school, as education is the key to everything that matters in life.

“Stay focused and connect with one another, don’t doubt yourself,” she maintains.

The team at 18twenty8 hope that one day the organisation becomes a national asset where people can share their views on education and mentorship.