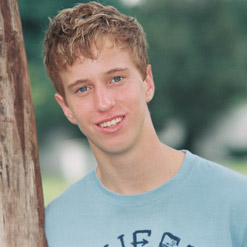 “I didn’t really sit down with the intention
to write a novel,” says Andy Petersen,
South Africa’s youngest published author.
“I thought it might be something but I
didn’t think it would become so big.”

Not many 16-year-olds can say they have written a book, let alone had it published. But that’s exactly what Andy Petersen has done, but at the time he didn’t know he would become South Africa’s youngest published author.

In fact, Andy was only 14 when he first started writing his debut novel, Daniel Fox and the Jester’s Legacy. He was studying for his November school exams and needed a distraction.

“I didn’t really sit down with the intention to write a novel,” he says. “I thought it might be something but I didn’t think it would become so big.”

The first script of the fantasy novel was completed over eight months, but the book currently on the shelves is very different to the first draft. When the manuscript was first submitted to publisher Penguin Books, it was rejected. But this didn’t discourage Andy: “It didn’t really bother me because I agreed with their decision. It wasn’t good enough.”

So he started from scratch with new ideas. The second script maintained the plot, but with far more depth to the story. Existing characters were developed further and new ones added.  Halfway through the writing of the second draft, Penguin Books asked to meet Andy with a view to securing a contract.

“I was so excited but also very surprised because the email came out of the blue,” he says.

The revised manuscript was submitted to Penguin in April 2008, and accepted for publication. Although he wrote the novel with a young adult audience in mind, he thinks it would also appeal to readers of all ages who enjoy the fantasy genre.

The novel setting is the afterlife and underworld. The story starts with Daniel Fox waking up on Monday morning in his house in New York. He expects an ordinary day, but it is in fact the day he will die. After witnessing the murder of an old man and being kidnapped from the Museum of Ancient History, Daniel Fox ends up in a waiting room. This leads to the capital of the underworld, the great city of Arison, where more adventure awaits.

Andy says his life has become a lot more busy since the book was launched earlier this month. As an author he has a number of new commitments, such as attending book launches. He is also visiting schools across the country to promote not only his book, but also a culture of reading.

It has been a fine balancing act to not neglect his schoolwork. He still wants to perform well academically and keep up his involvement with debating and drama at St John’s College.

Then there is his busy social life – Andy certainly doesn’t fit the stereotype of the reclusive writer. He’s also a musician and plays keyboard in a band called Little Red House.

“It is a fairly new band but we are all pretty serious musicians,” he says. On weekends when he’s not playing in the band or writing, he likes to watch music gigs with his friends.

This won’t be Andy’s only novel; he hopes that it will be the first in a trilogy. In fact, he’s already got some ideas for the sequel.  Daniel Fox and the Jester’s Legacy has been well received and has been short-listed for the Exclusive Books One Club Prize. It will also be the face of the award this year.

He is quick to point out that he isn’t a whizz-kid. “I don’t posses any extraordinary skill that enabled me to complete the book,” he says.

He adds that his interest in literature and writing all began with his love of reading. “I’ve always loved reading and when I was a child my parents always read to me.” He particularly likes fantasy literature such as The Lord of the Rings and Harry Potter.

“The book was published because I finished it, and because I kept at it when I started,” he says. Andy encourages other young writers not to give up writing. “You are never too young to start writing. Often young people are deterred because they only see writers who are much older. Maybe wisdom of age does help, but it doesn’t mean you can’t do it.”