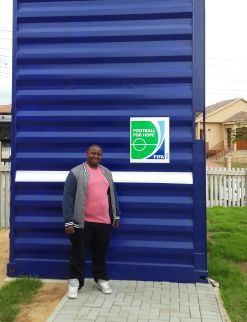 Sikhumbuzo Mnculwane says that the success of the programmes is evident in girls delaying their sexual debut.

Football is the world’s most popular sport. That popularity has been used to spread the message of HIV/Aids prevention in the townships of South Africa and Africa.

“Over the past years, we have been working closely with community-based organisations across Africa in developing, constructing and running the 20 Football for Hope Centres for education, public health and football,” writes FIFA president Sepp Blatter in the final report on the world cup’s official social campaign.

“FIFA is passionate about embracing the popularity of football to improve the lives of young people. As football becomes a bigger economic and social force in the world, it is vital that we ensure the beautiful game plays its part in building a better future for all.”

Football has become a vital instrument for hundreds of social development programmes run by non-governmental and community-based organisations around the world. “These programmes are providing children and young people with valuable tools to actively make a difference in their own lives. By addressing the most pressing issues in each community, the programmes are contributing to positive social change on a global scale,” reads the report.

Football for Hope gives funding for equipment and training, as well as providing a platform for discussion and collaboration. “The ultimate goal is to use the world’s most popular sport to spark positive change for a better future.”

And those discussions have ranged from HIV/Aids awareness, conflict resolution, gender equality, capacity buildings and peace building, to youth leadership and life skills. Football for Hope, initiated in 2007, has benefited more than 250 programmes in more than 60 countries.

FIFA stresses that these discussions are particularly important as many people in Africa face “serious social challenges”. “By using positive elements of football, many locally run organisations have been successful in reaching young people and addressing such challenges,” it reports. More than 70 000 young people – although a mere drop in the ocean for the continent’s one billion people – have been touched by the programme.

Football for Hope in South Africa

The Football for Hope centre in Johannesburg is in Alexandra township, in the north east of the city. It’s run by the passionate 30-year-old Sikhumbuzo Mnculwane, who was born in Alexandra, where he still lives.

The centre was completed in February this year, and consists of two football fields, a cricket pitch, and a six-a-side, 20m by 40m walled AstroTurf football field. The building and fields were sponsored by FIFA. Although the land is owned by the city council, the centre is managed by Grassroot Soccer, an organisation begun in Zimbabwe, which uses football in the fight against HIV/Aids, says Mnculwane.

The other centres in South Africa are in Edendale in KwaZulu-Natal, QwaQwa in the Free State, Khayelitsha in Cape Town, and Mogalakwena in Limpopo.

Grassroot Soccer was founded in 2002. Its founder and managing director, Tommy Clark, a paediatrician, played soccer in Zimbabwe professionally, noticed the devastation caused by HIV, but was also amazed at soccer’s intense popularity. “Together with a group of friends who had similar experiences, he and co-founders Methembe Ndlovu, Ethan Zohn and Kirk Friedrich created Grassroot Soccer,” reads the organisation’s website.

They developed and piloted an interactive soccer-themed HIV prevention curriculum that was implemented in 2003. It received a positive evaluation by The Children’s Health Council, a Stanford University affiliate group, and subsequently received a three-year grant in 2005 from The Bill and Melinda Gates Foundation to expand its work.

Grassroot Soccer has been operating in South Africa since 2006 and set up its African headquarters in Cape Town in 2008. It operates programmes in Alexandra and Soweto in Johannesburg, and in three other cities – Cape Town in the Western Cape, Kimberley in the Northern Cape, and Port Elizabeth in the Eastern Cape.

SKILLZ Core targets 13- to 15-year-olds, using soccer-based activities and discussions to develop positive life skills to help boys and girls adopt healthy behaviours, while learning about HIV/Aids. It is believed that 40% of all new HIV infections occur among those under 24. Barriers to stopping new infections include a lack of knowledge about HIV and stigmatisation.

Generation SKILLZ targets 15- to 18-year-olds by using soccer to address the main drivers of HIV infection: multiple partners, age-disparate relationships, and gender-based violence; UNAids research shows that one in seven new HIV infections could be prevented if women were not subjected to physical or sexual abuse.

SKILLZ Street targets 13- to 15-year-old girls with a programme that combines Fair Play soccer with sexual and reproductive health and life skills, HIV counselling and testing, and access to community services. Female coaches aim to empower girls to avoid risky behaviour and protect themselves against contracting HIV. Fair Play soccer is played without a referee; the players make the rules and resolve conflicts themselves on the field.

South Africa has one of the highest rates of sexual violence against girls aged 12 to 17 in the world, according to UNAids. The results of the Football for Hope programme are evident in an increase in self-confidence, peer role modelling, HIV-related knowledge, and general awareness of health services available.

The success of the programmes

Mnculwane attests to the success of the programmes, saying, “Girls in the programme are six times more likely to delay their sexual debut.” He reports too that the rate of teenage pregnancies in a school in Alexandra has dropped from three or four a year to zero. And the girls’ knowledge of HIV has jumped from 60% to 90%. “Some 500 000 people have gone through the programme since 2007,” he confirms.

He says that he and his team – six full-timers, two international volunteers, and 30 young Alexandra volunteers – work with schools, playing soccer during or after school hours.

The organisation uses the game’s language and metaphors to teach; for example the children will kick the ball around a line of orange cones, and if they touch a cone, it symbolises an HIV risk. Punishment would be a push-up. If they touch the cone again, the whole team has to do push-ups. This tells them that their actions affect the whole community, and the country, and the world, says Mnculwane.

“We want to stop the next young people from making a choice that could lead them to contracting HIV,” he says.

Mnculwane admits that one of the challenges is getting parents involved. Traditionally, parents do not speak about sex and sexual behaviour to their children, leaving them to learn about sex from their friends and television; the information is not always trustworthy, or devoid of moral lessons. Teachers too are often uncomfortable talking to young people about sex.

But Mnculwane is optimistic that future generations of parents and their children will speak more openly about these topics.

Mnculwane went to school in nearby Sandton, where he was the first black head boy at Sandown High School, a formerly whites-only school in the affluent suburb.

He went on to earn a degree in education at the University of Johannesburg, and returned to teach at Sandown High. But an event in Cape Town changed his career path. Mnculwane attended a youth forum in Khayelitsha township and heard a 17-year-old girl from Lesotho talk about herself, and the fact that she was HIV-positive.

She had got involved in the Football for Hope Kick for Life programme in her country, and had turned her life around. “Her confident, positive attitude despite her huge challenges, struck me. It was a great outlook, and I decided that this is where I want to go,” he says.

He was approached by FIFA, and got involved in Grassroot Soccer.

According to the Statistics South Africa 2011 census report, Alexandra is home to some 200 000 people, jammed into a tiny area. The overcrowded conditions, together with high unemployment, fuel drug and alcohol problems in the township, and encourage crime. But, says Mnculwane, conditions in the township have improved recently. “The police are better, and there are fewer shacks. It is not as chaotic.”

He adds: “Alex is easy to live in – you can walk to Sandton, there are factories nearby to look for jobs. It is easy to get to places you want to get to.”

He describes himself as “ambitious, compassionate, an idealist and a leader”.

Mnculwane also studied development and economics at university, and wonders whether Alex residents could make partnerships with businesses in Sandton that will benefit the township.

“Development is my passion,” he enthuses.