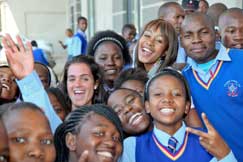 The matriculants of 2012 have a lot to prove as they are the first generation of ‘bornfrees’ to go over the threshold
(Image: SouthAfrica.info)


The class of 2012, which features the first group of South Africa’s bornfrees to complete their school career, will start writing their national senior certificate on Monday 22 October.

At a press briefing held on Thursday 18 October, education minister Angie Motshekga declared her department’s readiness for the examinations, after having consulted with quality assurance body Umalusi.

This year has not been without its fair share of trouble on the education front, with a discovery in June that some schools in the Limpopo province had not received textbooks. A massive media and public outcry followed this revelation, and civil society organisation Section 27 took Motshekga’s department to court for the mishap.

Motshekga assured the media at the briefing, however, that grade 12 pupils in the province were not affected by the blunder, which remains under investigation as allegations of tender fraud surfaced amidst the saga.

The year of the bornfrees

Earlier this year, ahead of South Africa’s celebration of Freedom Day in April, MediaclubSouthAfrica.com interviewed Sekgabo Motshwane, a matric pupil from Boksburg High School in the east of Johannesburg.

The 17-year-old spoke freely about what kind of future he’d like to enjoy in South Africa, saying that he planned to study design after matric and secure a good life for himself.

“One thing that I’m grateful for in a free South Africa is that I can be and do whatever I want,” he said at the time, adding that he does not face the same prospects of his parents’ generation in terms of a limitation on career choices.

Seven months on, MediaClub once again caught up with Motshwane, who happened to be at home studying for his accounting paper, his second after the English first paper on Monday.

“I won’t be taking any chances with accounting,” he says. “I need to study for it because I write the paper on Tuesday and there’s a lot to prepare before then.”

He explained that he may not have a set study regime, but that hasn’t hampered his confidence in achieving his goals in the exams.

“Our life orientation teacher gave us all a tip about what to do when you experience a mental block and your brain cannot take any more information,” says Motshwane. “You must exercise, and I have found that it works perfectly for me.”

Of all the papers he is due to write this year, the ones he looks forward to most are physics, maths and his ultimate favourite: engineering, graphics and design, for which he recently received an honour at his school’s annual prizegiving ceremony.

“The certificate was for achieving a distinction in the subject for three consecutive grades,” he says. His plans beyond matric are to take his design studies further.

His least favourite paper and one he does not look forward to, says Motshwane, is the English literature paper, which he will write in November.

The mathematics paper, the unpopularity of which has been a conscious topic over the past few years as the subject tends to attract too few pupils, will be written by 823 more candidates than last year.

A lower count of candidates has been recorded for the physics paper, however, than was the case in 2011.

The province with the highest number of candidates is KwaZulu-Natal, which will see over 156 000 write, followed by Gauteng and Limpopo, with over 128 000 and 92 000 respectively.

As many as 35 000 people will be responsible for the marking of the exam papers, a process that the department says will be concluded by mid-December so that the evaluation phase can commence.

Umalusi is involved at all phases of the exam process, and the end of the evaluation period will inform the minister of the results, which should be final and ready for publishing, as is custom, in national newspapers by the end of December.

Asked whether he thinks he will get used to the nerves, Motshwane says it’s too late now to be worried about what it all means.

“Yes, I’ll probably celebrate with my friends after that last paper is written, and relief has set in,” he says, “but I’m sure this festive season will be like no other for me.”