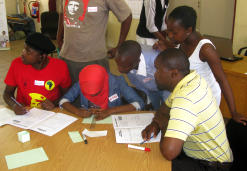 The Nepad Business Foundation (NBF) and the Centre for Creative Leadership (CCL) have launched a new initiative that will transform and raise the calibre of upcoming African leadership.

The programme, called 1 Million African Leaders Connect (1MALC), takes the form of a leadership development course and is aimed at three levels of society – managers, young people, and the community.

Its objective is to train a million competent African leaders by 2020, drawing them from the public and private sectors as well as communities. Courses are tailored for each target group so that learning will be relevant and practical.

“Africa has abundant natural and human resources,” said NBF CEO Lynette Chen, “but doesn’t have the capacity to translate those resources into constructive action.”

The 1MALC course will accelerate the development of progressive leaders, producing individuals who are well equipped to lead the continent into the future, said Chen. These leaders will not work at cross-purposes but will be driven by shared values, a common vision and an African identity, enabling them to implement sustainable economic growth across the continent and take advantage of the knowledge economy.

“Africa needs catalytic agents to effect change,” said Reuel Khoza, the keynote speaker at the launch event. Khoza is a prominent businessman, the non-executive chairperson of Nedbank and also the vice-chairperson of the NBF.

“These agents are the leaders we are looking for. Leaders are born, but they are also shaped and many of those who are left to their own devices tend to lurch from one disaster to the next without learning any lessons from their experience.”

One of the aspects of the 1MALC course is to help participants suss out lessons from former leaders, so that they can learn from – but not repeat – past mistakes.

African leaders are now ready to compete with the very countries that had once occupied them during the colonial era, said Khoza confidently, while admitting that there were significant challenges ahead. “We want to see an end to the long wait for African dominance.”

He said that such a plan can’t be accomplished in a matter of years, but that it will span generations.

“This will be the century of Africa’s ascendancy,” he said.

Chen and Khoza were joined on the day by fellow speakers Ibrahim Assani Mayaki, the CEO of Nepad and the former prime minister of Niger, as well as Neil Cole, a chief director in the National Treasury.

“In this world that is going through changes, Africa needs to have a common stance,” said Mayaki. “A backing of that nature – with thousands of fellow Africans thinking the same way – will be a powerful tool for an African leader.”

“You must understand the values and interests of others, even if they differ from your own,” said Cole. “You can’t lead otherwise.”

“You need to be an agile leader,” agreed Khoza.

The best of the best

The course is open not only to African citizens but to any ex-pats who live and work in Africa.

Potential 1MALC participants will have certain qualities, Khoza said. On a personal level, they must be committed to the 1MALC vision, and they must have an attitude of excellence and integrity.

“Our candidates must want to enhance their value to their company, their community and their country, and to contribute to the attainment of global competitiveness for Africa.”

It was also critical, said Khoza, for leaders to be able to work with other countries in their regions. “When all the regional and economic blocs pull together with a common vision, our victory will have begun.”

But he cautioned that this grand plan must be accomplished by Africans themselves.

“Our future is too important to leave in the hands of others,” he said. “We must abandon our victim mentality and become masters of our destinies, recognising the problems within ourselves, accepting them and ridding ourselves of them.”

The 1MALC programme is designed for those who are not content to merely follow, but for those who believe that the best way forward is to rewrite the rules.

The course, which costs R67 000 (US$7 500), is based on four pillars – leadership of self, leadership of others, care of the environment, and business acumen. It extends over 16 days of classroom learning, broken into four blocks of five, three, three and five days respectively. There is a break of five weeks between each learning block, which gives participants the chance to put their learning into practice.

“We believe that leadership comes from within,” said Eric Albertini of CCL, “and it is the gateway to transformation.”

“It’s not like an MBA,” he said. “The modules that you’d typically find in an MBA course, like finance or strategy, are not present in our course. Instead, you’ll find modules like personal branding and negotiation skills.”

Applications are now open for the first round which will focus on the business sector. Candidates should have at least seven years’ work experience and five years management experience, with a tertiary qualification of any kind, according to 1MALC.

The first course will take place in Johannesburg, starting on 8 April. It will include a study tour to Addis Ababa, the home of the AU, and one other African country, at an extra cost.

The closing date for applications is the end of February.

The reason that only established managers will be considered for this round, said Chen, is because they are the decision-makers and therefore transformation will be quicker. The course will accommodate middle management at a later stage.

The fees, which may seem daunting to some, are eligible for sponsorship, but not entirely because “we believe that you have to invest in yourself,” she said.

Chen called for corporate Africa to step forward and help to establish a funding pool to support worthy candidates who may not be able to afford or raise the full cost.

African youth to shake up leadership