Ministers from the “Basic Four” countries – South Africa, India, China and Brazil -have affirmed their commitment to work together for an agreed outcome at the United Nations Climate Change Summit in Mexico later this year.

It follows up on the summit that was held in Copenhagen last month, where South Africa was represented by Water and Environmental Affairs Minister Buyelwa Sonjica.

Sonjica was one of the ministers who met in New Delhi on Sunday to evaluate the inroads that were made in Copenhagen while also preparing for the Mexico round of talks.

“The ministers underscored the centrality of the climate change framework process and the decision of the parties to carry forward the negotiations on the two tracks of ad hoc working group on long-term cooperative action,” read a statement issued by the group.

They reiterated that all negotiations must be conducted in an inclusive and transparent manner.

While the Copenhagen accord produced political commitments to mitigate climate change by some leaders, rich nations were slammed for their failure to set bold targets on greenhouse gas emissions.

They also called for the early flow of the pledged US$10-billion in 2010 with focus on the least developed countries, small island developing states and countries of Africa, as proof of their commitment to urgently address the global challenge of climate change.

The four ministers expressed hope of a successful conclusion of ongoing negotiations leading to Mexico.

The World Wide Fund for Nature (WWF) described the group’s early lead on continuing climate negotiations as a show of commitment shown by the countries to a fair and effective UN-based outcome to climate change this year.

“South Africa is standing by its commitment to negotiate a multilateral agreement as part of the Africa Group and to maintain the two-track process under the UNFCCC,” said the organisation’s Richard Worthington.

Would you like to use this article in your publication or on your website?
See: Using SAinfo material 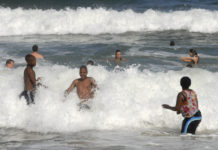