The University of the Witwatersrand in Johannesburg has climbed the world rankings of universities, to become the best in Africa.

This comes from the latest Academic Ranking of World Universities, commonly referred to as the Shanghai rankings. It placed Wits among the top 1% of all universities in the world, and on the threshold of making it into the top 200.

Wits University, as it is more informally known, welcomed the news, released in mid-August, and credited its outstanding staff, alumni and student body.

“At Wits our research output has increased substantially in the last few years,” said Professor Zeblon Vilakazi, deputy vice-chancellor of research at the university. 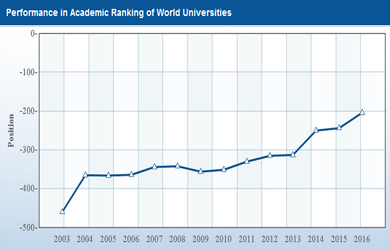 For the 14th consecutive year, Harvard University in the US took the top spot, while Stanford University and the University of California, Berkley, both also in the US, came in second and third respectively.

The universities of Cape Town, Stellenbosch and KwaZulu-Natal all featured in the top 500 academic institutions in the world. Vilakazi said it demonstrated the strength of the South African higher education system.

Wits acknowledged different rankings made use of different methodologies so results should be “approached with a level of measured circumspection”.

“For this reason and others,” he said, “we believe that as a university we should not be driven by ranking systems. Rather, our focus should be on building a nationally responsive and globally competitive institution. This means concentrating on research and teaching, and embedding the institution in the work that is necessary to South Africa, the continent of Africa, and the rest of the globe.”

Brand South Africa is proud to collaborate with the National Heritage Council (NHC) and...