In 2030, South Africa’s economy is inclusive and dynamic. The fruits of growth are shared fairly. The economy has close to full employment, equips people with the skills they need, ensures the ownership of production is more diverse and able to grow rapidly, and provides resources to pay for investment in human and physical capital.

Economy and employment – The vision

The National Development Plan’s vision is that, in 2030, long-term accelerated economic growth has reduced unemployment and inequality and helped create a more inclusive society. This is in part due to diligent work in carrying out growth plans such as the New Growth Path, the Industrial Policy Action Plan and the National Infrastructure Plan.

Economy and employment – The challenges

Since 1994, the South African economy has grown at the average for middle-income economies, after a period of extremely slow growth from 1976 to 1984.

Job creation has picked up, so that the share of working age adults with employment stabilised at just over 40% after falling from the late 1970s through 1994.

Still, the global norm is around 60%, and jobs growth has not been strong enough to raise the level of employment qualitatively from the low levels inherited in 1994. Investment rose from 13% of GDP in 1994 to around 20% in 2012.

While exports climbed from 15% of GDP to 18%, imports also increased funded largely by short-run capital inflows into equity and bonds. The result has been a relatively large trade deficit, especially from the mid-2000s.

South Africa has also failed to reap a demographic dividend by harnessing the potential of a proportionately large cohort of working-age youth.

Achieving significantly higher growth is necessary, although not sufficient, to address these core socioeconomic challenges. The NDP targets growth at over 5%.

To pave the way for accelerated economic progress, South Africa must make tough decisions involving both compromises and trade-offs. These decisions are broadly captured in the NDP, with specific proposals in the New Growth Path, Industrial Policy Action Plan and National Infrastructure Plan.

But many economic factors lie outside the control of the government – some originate outside the country altogether. Nonetheless, it is important to develop consistent, efficient and effective strategies to support growth with job creation and equity.

• Reduce the cost of living for poor households and costs of doing business through microeconomic reforms.
• Develop proposals for an acceptable minimum standard of living and proposals on how to achieve this over time.
• Remove the most pressing constraints on growth, investment and job creation, including energy generation and distribution, urban planning etc.
• Position South Africa to attract offshore business services, and build on the advantage provided by its telecommunications, banking and retail firms operating in other countries.
• Increase the benefit to the country of our mineral resources by giving clear certainty over property rights (the right to mine); increasing rail, water and energy infrastructure; and structuring a taxation regime that is fair, equitable and predictable and that recognises the non-renewable nature of mineral resources.
• Broaden the expanded public works programme to cover 2-million fulltime equivalent jobs by 2020.
• Offer a tax incentive to employers to reduce the initial cost of hiring young labour market entrants. Facilitate agreement between employers and unions on entry-level wages.
• Give a subsidy to the placement sector to identify, prepare and place matric graduates into jobs.
• Business and labour to develop their own proposals to reduce youth unemployment.
• Adopt a more open immigration approach to expand supply of high-level skills.
• Adopt an approach to handling probationary periods that reflects the intention of probation.
• Simplify dismissal procedures for nonperformance or misconduct, especially for smaller firms.
• Strengthen dispute resolutions mechanisms in the labour market with a view to reducing tension and violence.

• Productive investment is effectively crowded in through the infrastructure build programme.
• The productive sectors account for a growing share of production and employment.
• The elimination of unnecessary regulatory burdens and lower price increases for key inputs and wage goods fosters business confidence, reduces costs for working people and producers, and sustains investment and economic growth.
• Workers’ education and skills increasingly meet economic needs.
• Spatial imbalances in economic opportunities are addressed through expanded employment in agriculture, the build programme and densification in the metros.
• Macroeconomic conditions support employment-creating growth.
• Workplace conflict is reduced and collaboration between government, organised business and organised labour improves.
• Economic opportunities for historically excluded and vulnerable groups are expanded and the growth and development in small business and cooperatives is improved markedly.
• Public employment schemes provide relief for the unemployed and build community solidarity and agency.
• Investment in research, development and innovation supports inclusive growth by enhancing productivity of existing and emerging enterprises and supporting the development of new industries. 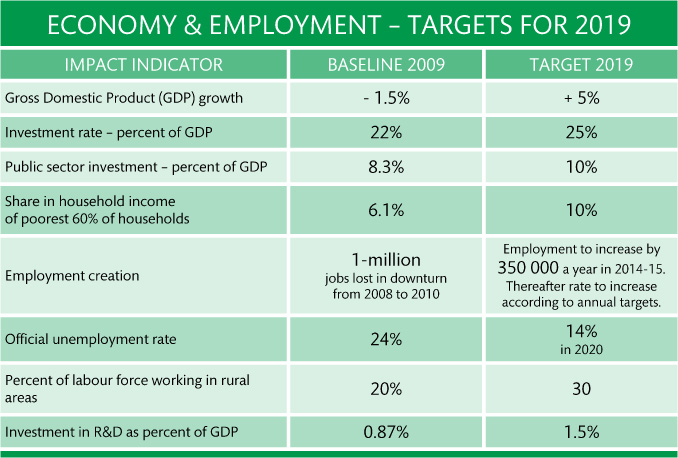 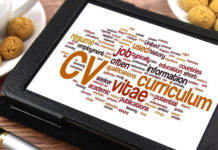