In 2030, all people living in South Africa feel safe, have no fear of crime, are properly served by the police and courts, and know corruption no longer eats away at their livelihoods.

The National Development Plan’s vision is that, in 2030, people living in South Africa feel safe at home, at school and at work. They enjoy community life without fear. Women walk freely in the street and children play safely outside.

People have confidence that the criminal justice system will catch and prosecute criminals. The police are professionals – skilled, disciplined and ethical individuals who value their work and serve the community.

Substantially reduced serious and violent crime means businesses are thriving. Local and foreign investors are setting up new businesses. These create new jobs, which in turn reduce poverty and inequality.

The criminal justice system is well-resourced and professional. Its officials are skilled, value their work, serve the community, safeguard lives and property, protect communities and citizens against violent crime, and respect people’s rights to equality and justice.

South Africa has zero tolerance for corruption, which has been radically reduced. Anti-corruption agencies are well-resourced, with skilled and experienced officials. Free of political influence, they have strong powers to investigate and prosecute corruption.

Citizens do not offer bribes and have confidence that public and private officials will be held accountable for their actions. Leaders, in turn, have integrity and high ethical standards.

Unacceptably high levels of crime, especially serious and violent crime, cause people in South Africa – especially vulnerable groups such as women, children and the elderly – to feel unsafe and live in fear.

Crime hampers the country’s economic development and undermines the wellbeing of its people, limiting their ability to achieve their potential.

Work is needed throughout the criminal justice system – police, the courts, and correctional services. Public confidence is eroded when criminals escape the law, arrests do not lead to convictions, and prisoners escape courtrooms and detention facilities.

South Africa’s borders – land, sea, and air – must be safeguarded to curb transnational crime and corruption.

Cross-border crime includes illegal immigration, drug trafficking, human trafficking, arms smuggling, the transport of stolen vehicles, and the import of illegal import of contraband. Criminality at our borders can be exacerbated by corrupt border officials.

A range of uncoordinated government departments and state agencies work on our borders. This has led to security loopholes, poorly synchronised planning, monitoring and oversight, the misalignment of critical systems, and weak integrated risk management.

Information and communication technology is now indispensable to South African society. This means both the economy and ordinary people risk falling victim to cybercrime. Digital crime is also a threat to national security.

Increased global bandwidth will lead to wider internet use and a corresponding increase in criminal activities in cyberspace. Existing digital security policies and legal frameworks are not up to the task to deal with existing challenges. South Africa also lacks the institutional mechanisms to curb digital crime in a coordinated manner.

Intolerably high levels of corruption in both the public and private sectors undermine the rule of law and impede South Africa’s work towards socioeconomic development and service delivery.

Perceptions of corruption deter investment in the country. More than this, corruption in the criminal justice system erodes public trust in the system’s ability to combat corruption.

Anti-corruption measures have not led to enough prosecutions and convictions, especially in cases where the amount involved is more than R5-million.

The challenges remain that public servants are not yet sufficiently accountable, whistle-blowers not adequately protected, and procurement not closely enough monitored.

Achieving the vision of a safe South Africa, free of fear and corruption, requires targeted action in five areas.

A strong criminal justice system (CJS) requires cooperation between all departments in the government’s justice, crime prevention and security cluster. The Review of the South African Criminal Justice System has come up with a seven-point plan to fix current weaknesses.

• A single set of objectives, priorities and performance measurement targets.
• Legislation and protocols to align the CJS.
• Practical short- and medium-term proposals to improve performance of courts.
• Improve components of the CJS that reduce its overall performance.
• A national CJS information system to improve strategies, plans and decision-making.

The police codes of conduct and professionalism should be linked to promotion and discipline. Recruitment should attract competent, skilled professionals.

The decision to demilitarise the police force, moving away from its history of brutality, was a key goal of transformation after 1994. The recent remilitarisation of the police has not resulted in greater respect for the police or higher conviction rates – if anything, it has contributed to violence. The police should be demilitarised and developed into a professional civilian service.

An integrated approach to the causes of crime

A safe society means tackling the fundamental causes of criminality, which require a wide range of state and community resources.

The Medium Term Strategic Framework (2014 to 2019) identifies the following sub-outcomes to ensure all South Africans are and feel safe.

The Medium Term Strategic Framework (2014 to 2019) identifies the following targets to ensure all South Africans are and feel safe. 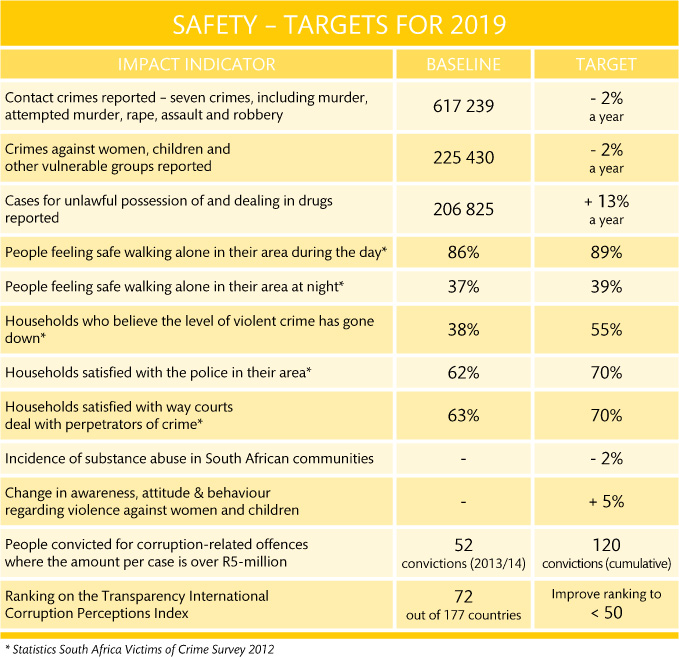