Almost a year into the country battling Coronavirus, President Ramaphosa is set to deliver the State of the Nation Address(SONA), South Africa’s most important event in the annual calendar on Thursday, February 11 at 19:00, under the theme “Following up on our commitments: making your future work better”.

SONA is called by the President in terms of Section 42(5) of the Constitution. It is a joint sitting of the two Houses of Parliament and one of the rare occasions that bring together the three arms of the State namely; the Executive, the Judiciary and the Legislature under one roof.

The President uses this opportunity to speak to the nation on the general state of South Africa, reflecting on a wide range of political, economic and social matters within the domestic and global contexts. He also accounts to the nation on progress made by the government and to set out the programme of action for the coming year. Traditionally, the President makes key government announcements during this joint sitting of Parliament.

SONA 2021, in the year of the pandemic will adhere to the National State of Disaster regulations, in the form of a hybrid joint sitting, with at least no more than 50 Members of Parliament. Due to the limited number of persons permitted within the precincts of Parliament, and Parliament’s sensitivity to the prevailing conditions, various ceremonial aspects that usually characterise the SONA have been suspended.

Therefore, a huge saving on the SONA budget which will help rejuvenate the economy. No red carpet and procession of the three arms of the state, physical participation of junior and civil guard of honour, prominent persons, Imbongi, military parade that leads the presidential procession onto a saluting dais on the steps of the National Assembly, the guard of honour by the National Ceremonial Guard and the 21-gun salute. 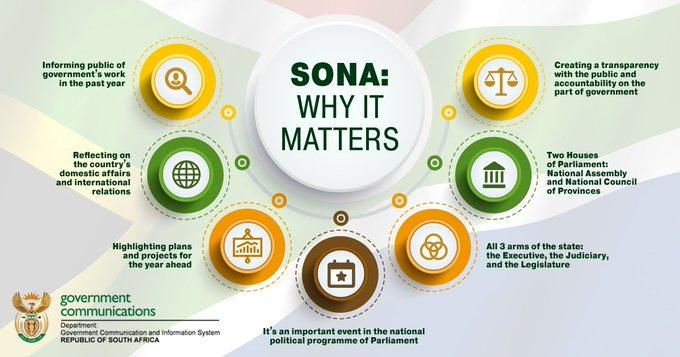 Looking back at key points from SONA 2020

The launch of the Mara Phone state-of-the-art facility in Durban last year, led to the employment of 200 youth, of which 67% are women.

An online company registration system that enables users to register a company and apply for and obtain a tax number, VAT number, B-B-BBEE certificate, unemployment insurance and the skills development levy, among others, in one place.

Through BizPortal (https://bizportal.gov.za/) government aims to significantly reduce the time it takes to set up a company.

On land matters, R3.9 billion has been released to support black commercial farmers through the Land Bank. To promote greater certainty in the use of land for productive activities, more than 1 400 30-year leases have been finalised.

School infrastructure and the safety of learners has also been prioritised. Since the inception of the Accelerated Schools Infrastructure Development Initiative (ASIDI) programme, 229 inappropriate and unsafe schools have been replaced with new schools.

Government has intensified the fight against gender based violence which has gripped the country through the 365 days’ campaign for No Gender-Based Violence and Femicide (GBVF).

South Africans anticipate some key commitments from the President especially as the country battles coronavirus.  Some pressing issues include solutions to the jobs loss exacerbated by the coronavirus, the economy recovery plan and concerns surrounding the vaccine.