Austerity measures that were introduced to reduce wastage in the public sector had led to the government reducing its spend notably, Finance Minister Nhlanhla Nene said when tabled his Medium Term Budget Policy Statement (MTBPS) in the National Assembly on 21 October.

In 2013, under the leadership of Pravin Gordhan, the Treasury announced wide- ranging measures to reduce public spending, issuing an instruction for government credit cards to be closed, and for the cost containment of consultants, travel, entertainment and eventing expenses by all government departments.

Those measures were now starting to bear fruit, Nene said, adding that “across all national and provincial departments. a 3% decrease was achieved in spending on consultants. and a 47% decrease in catering, entertainment and events expenditure”.

When they were introduced, the Treasury also announced that spend on official travel would be reduced, with only ministers and director-generals allowed business class travel allowances. Other measures to cut spending included motor vehicle bulk buys and limited hotel allowances.

Nene said there was further light at the end of the tunnel as far as government spending was concerned.

“Preliminary budget data indicate that there will be further reductions in these categories of spending over the medium-term expenditure framework period, contributing both to value for money and improved public service delivery.” While there was not yet full compliance with these ongoing measures, “the Treasury is currently revising the cost containment instruction to review thresholds and clarify its implementation, especially on expenditure related to conference”.

Expenditure ceiling projected to rise by 2.5%

The minister went on to highlight expenditure that was necessary for effective national growth, proposing that the Treasury increase spending over the long term to sustain debt levels when the economy experienced turbulent times.

South Africa is experiencing a projected slow growth of 1.5% in 2015. With the economy buckling under energy constraints and other external factors, the minister warned that “the expenditure ceiling remains the primary tool to stabilise debt. No resources will be added to the spending ceiling over the next two years.

“Beginning with the 2016 Budget, government will align spending limits in the outer year of the MTEF (Medium Term Expenditure Framework) with the long-term path of GDP (gross domestic product) growth, building on government’s countercyclical and sustainable approach to fiscal management.”

This would link the expenditure ceiling to the long-term fiscal guideline, which would link spending to projected economic growth. That growth was expected to rise to 2.8% – on condition, Nene warned, “that government eases electricity, transport and telecommunications infrastructure constraints by 2018”.

“The long-term guideline gives expression to the fiscal principles of countercyclicality and debt sustainability. It will ensure that spending grows at a stable rate over the business cycle.”

A countercyclicality approach was adopted at the height of the 2008 global meltdown; it means the government increased its spending when times were hard, and slowed it to fall within GDP growth when the economy stabilised.

This helped the country ride the tide, with government rolling out large capital projects, including the construction of stadiums that were used during the 2010 FIFA World Cup.

An expenditure ceiling should be sufficiently flexible to accommodate large shocks and structural changes to the economy, Nene stressed. “However, where structural improvements in revenue are apparent, through tax policy changes, improved administration or economic shifts, a corresponding increase in the spending ceiling will be considered.”

R200-million set aside for nuclear

In a media briefing before his speech on Wednesday, Nene emphasised the need to invest in solving energy challenges for the country. With R200-million reserved for this direction, he said South Africa had made good progress in powering the nation, over and above the nuclear option.

“Ultimately what the National Treasury and Department of Energy would want to see is a situation where we are able to address our energy challenge in totality.”

He named the opening of the first unit of Medupi and the ongoing success of the Independent Power Producer programme, adding, though, that more still needed to be done to ensure that South Africa had an adequate and reliable supply of energy to power a modern economy.

Another development was the government’s alleviating of the pressure of Eskom’s financial position with a R23-billion equity investment financed from the sale of Vodacom shares. Additionally, it was revising its integrated resource plan, which maps out the country’s future energy mix, including options for renewables, coal, gas and nuclear power.

“The state has built partnerships with the private sector to address the electricity-supply gap, making additional capacity available through the renewable energy programme. This initiative is being extended to include investment in base- load coal generation plants,” Nene noted in his address to Parliament. 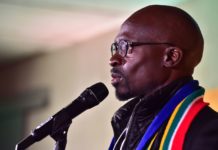