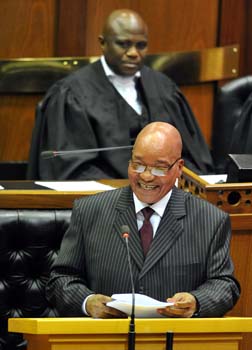 The government was doing its part, now do your part and invest in South Africa, he said, calling on business, labour, civil society and residents to form a partnership with the state.
He was speaking at a business breakfast briefing, hosted by Brand South Africa, the SABC and The New Age at Grand West Casino in Cape Town on 10 February 2012. Just a few hours before, he had said goodnight to his guests after delivering his fourth State of the Nation Address (SONA) in Parliament.

The mood at Grand West was jovial; everyone was relaxed and satisfied. The president himself was fresh-faced and upbeat.

At the breakfast were government ministers, deputy ministers and business people, all armed with their questions. The briefing was broadcast live on SABC, and the general public was able to send in their questions for the president on Twitter and SMS.

The openness of the dialogue was precedent-setting for a sitting South African president, and certainly marked a change in the government’s way of doing business.

“We want to do things differently. We want to take South Africa forward. We believe we’ve made progress, but we know that there are challenges,” he began. The government was tackling the economy in a way that it had not done in the past. “We can’t only do politics; we must also do the economy.”

The government was creating an enabling environment and building infrastructure, and business needed to invest in opportunities that would open up. This would bring jobs and so improve the quality of life for all.

“We have discussed the difficulties of doing business in South Africa. We are opening this. You must participate in this window period.”

Partnership was a big theme for Zuma, who called on business to work with the government to deal with the negative impact of job losses. Training was mentioned as a possibility. “We must create the kind of projects that can create jobs.”

Asked what was different for workers in his SONA – we’ve heard this all before, was the criticism – he said: “We’ve created an environment where jobs can be created. We have a massive infrastructure programme; there is money for it. The private sector must see the opportunities for investment, and invest. The logical consequence of that is jobs.

“You can’t have jobs without investment and the government is creating an environment for investment.”

A hot potato issue, especially given that the Mining Indaba has just finished in Cape Town, is the nationalisation of mines. The final word on the topic came from the president. Setting many minds at rest, and garnering a round of applause, he said: “Nationalisation is not our policy. It is as clear as that. Our policy is a mixed economy.”

Of potential, he said Africa was one of the fastest growing regions in the world, and we should invest in that potential. “South Africa has the potential to grow. Working together, we can take advantage of Africa, the Brics countries and the changing economy. Invest in this country; invest in your future.”

Brief questions
Asked what keeps him awake at night, the president answered: the plight of the poor. “I am kept awake thinking of ways to alleviate their plight.”

He pointed to South Africa’s strategic global importance in regards to shipping, saying it did nothing in its waters for its economy, despite the shipping lanes that passed the country. There were massive opportunities in this sector.

Of toll roads, another hot potato, he said they were necessary for road maintenance. However, the issue was not closed. South Africa was unusual in that the government was open to discussion of ideas and policies it had put forward.

In answer to a question from the floor, the president said fronting in business – whereby companies use black people as figureheads to up their black economic empowerment ratings – would be punished. The details of what that punishment would be still had to be worked out, though. The law must come first, he said, and the details would come after.

Of small towns, their factories and rural areas, he said the government was talking of reviving the economy and development of those regions as part of its plan.

Asked about what was being done to stop farm murders, he pointed out that as crime was falling, so were farm murders. The police were working with farmers to stop this crime.
The police were also working hard to address the issue of piracy. Many raids had already been carried out.

Regarding service delivery, the government had delivered to some degree, but there were still challenges. There was electricity and water available where there had been none before. “The question of infrastructure remains a challenge.”

The Italian ambassador offered his country’s and Europe’s help – we could share experiences, promote investments and help you avoid the mistakes we made in industrial policy and job creation, he said, to which Zuma replied that South Africa was certainly keen to learn what went wrong, and what would happen to alleviate the present economic crisis.

Questioned about land reform, Zuma again spoke of the Green Paper on Land Reform he had mentioned in his SONA. “We are looking at those issues,” he said. “The fact is that lots of land was taken away and many people were left landless. We can’t let this continue. We need frank views from South Africans on how to solve land issues.”