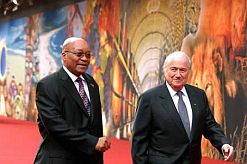 The first of January 2010 marked South Africa’s most important year since 1994, said President Jacob Zuma in the opening words of his New Year’s address to the nation.

“Together as a nation we set the tone and made history in April 1994. We embarked on a phase of reconciliation and forgiveness, and worked hard to build one nation, united in its diversity.

“We began the socio-economic transformation of our country to build an inclusive society, out of the racial and ethnic divisions of the past. We have done well in this regard, over the past 15 years.

“The year 2010 is our next critical moment. We have won the greatest marketing opportunity of our time, the rights to host the 2010 Fifa World Cup. Together as all South Africans, we must make this one of the most successful projects we have ever undertaken as a nation!

“The World Cup must revive the spirit of unity and patriotism in the same manner that the 1995 Rugby World Cup brought the nation together.

“It must remind us that there is a lot to celebrate about our country. Our successes have made us an inspiration to the world in a manner that many South Africans do not even realise.

“We have proven to the world that it is possible to emerge from a horrible conflict, and work together as various political parties, to build a successful, peaceful, stable, multiparty constitutional democracy.

“Together we have built a country that proudly espouses non-racialism and non-sexism, and which enshrines the supremacy of the Constitution and the rule of law. Together we have built an accessible democratic State, founded on the values of human rights and freedoms. Among those who have played some part in these achievements are the opposition parties represented in our democratic parliament

“Together we must make 2010 the year in which we renew our commitment to national unity and nation building. This we must do as all political parties, traditional leaders, business, labour, youth, sports bodies, women, the media, religious leaders and all sectors.

“It must be a year in which we put South Africa first, and take forward our collective mission to shape this country into one of the most successful constitutional democracies in the world. It must be the year in which we work together to make the Soccer World Cup the biggest turning point in the marketing of our country.

“The year 2010 must be the year in which for the first time, we all communicate positive messages about our country to the world – the successes and possibilities. We have to put the culture of negativity behind us.

“Together we must ensure long-lasting benefits for the country. There is a lot to be gained from the World Cup. We can already see the fruits of the tournament. We have new magnificent stadia, roads and new-look international airports. Through the major boost to the construction industry, many of our people obtained work and training opportunities, and this helped to reduce the impact of the recession.

“Working together we must ensure that the tournament enhances our country’s global competitiveness. It must contribute to long-term economic growth and the creation of decent jobs.

“Fellow South Africans, as hosts, we must be welcoming and hospitable to the thousands of international visitors and soccer teams. We must all be active ambassadors of our country! We must support our National team, Bafana Bafana. With the nation behind them, they will perform well and make us proud.

“Most importantly, we must make 2010 an exciting and most enjoyable year for all of us!