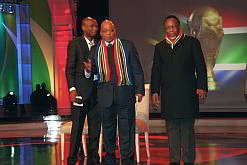 President Jacob Zuma is expected to
include a progress report on job creation,
education and healthcare, land reform
and the fight against crime, in the state
of the nation address.
(Image: Bongani Nkosi)

An estimated 3.5-million South Africans will be glued to their television sets on the evening of 10 February 2011 as President Jacob Zuma delivers his annual state of the nation address. Citizens are hoping that this year’s speech will pay strong attention to job creation.

During the previous week the Presidency put out the following message on social network sites Twitter and Facebook: “How can we improve the lives of all South Africans? This is your platform, the president is listening.”

Presidency spokesperson Zizi Kodwa said the president’s office sorted through all the comments collected, selected certain ones and presented them to Zuma to include in his speech.

The state of the nation address, which marks the official opening of parliament, provides an assessment of South Africa’s socio-economic targets reached in 2010 and maps out key focus areas for the year ahead.

Zuma’s speech is expected to include a progress report on job creation, education and healthcare, land reform and the fight against crime – all of which are government’s priorities.

Minister in the Presidency Collins Chabane said this year’s address would focus largely on economic transformation, “while not neglecting the important social transformation issues and improving access to basic services”.

“I hope the president highlights to us the government’s plans for job creation,” said Ismail Khan from Randburg, Johannesburg. We have a huge unemployment problem in this country, which leads to many other social problems, such as crime and poverty.”

However, the latest statistics released in February 2011 are more encouraging: 121 000 new jobs were created between the third and fourth quarter of 2010.

“The president’s speech should focus on telling us how the government will create decent jobs going forward, not just jobs, but long-term, concrete employment,” said Claire van Wyk from Helderkruin in western Johannesburg. “Our current employment rate is excessively high and needs urgent improvement.”

Ntsika Mhlana from Matatiele in the Eastern Cape said he thinks the speech should focus on the government’s plans for improving public schools. “Some schools still don’t have proper basic resources such as running taps and sanitation. In this day and age that’s just unacceptable. How can we promise children a quality education when the schools they attend don’t have such basic resources?”

Amanda Parker from Cape Town has similar sentiments: “Most of the issues our country face stem from the fact that many people do not have a quality basic education and therefore cannot pursue higher education and get a good job. Our government needs to fix the schools and ensure they provide quality education.”

Service delivery is the issue Nontobeko Kubheka, from Witbank in Mpumalanga, thinks the president should focus on in his speech. “I would like to hear how the government will hold its various departments accountable for lack of delivery and mismanagement of funds. Departments are supposed to deliver services to us. We need to hear from the president what measures will be put in place to ensure this happens.”

Following South Africa’s successful staging of the Fifa World Cup in 2010, some South Africans feel Zuma should use this year’s address to look at some of the highlights of last year and how these achievements can be used as catalyst for the future.

“We must not forget our achievements,” said Thuto Booi from Fourways in northern Johannesburg. “I’m keen to hear about some of the things that the country got right. I think the past year was a good year. We did well hosting the first Fifa World Cup in Africa. I’m sure there are other such achievements worth celebrating in this year’s address.”

In an interview on local radio station SAfm, Zuma said that he was aware of the huge responsibility that lay before him as he woke up on the morning of the address. “I positioned myself with an understanding that I am going to be talking to the nation – that is one of the most important addresses that you can make,” he said.

“The nation puts you here and they are expecting you to report back on what you have been doing, but also to say what is it you’re going to do on the tasks before you.”