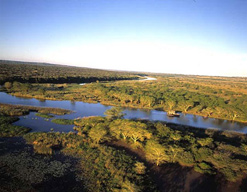 Once degraded and depleted of wildlife
by hunters and others, the 57 000 acres
of bushveld that make up Phinda Private
Game Reserve have been rejuvenated
and restocked with over 2 000 animals.
(Image: Phinda Private Game Reserve)

Launched in 2007, the awards are aimed at “turning the travel industry’s enormous potential to improve the planet into reality”, the magazine says. There are five World Saver categories, for travel businesses making a significant contribution to poverty alleviation, preservation, education, wildlife and health.

Owned by Conservation Corporation Africa, or CC Africa, Phinda Private Game Reserve was the overall winner of in the wildlife category. It also received an honourable mention in three more of the five World Saver categories – for poverty alleviation, education and health. The awards will be handed out at a gala function during the second annual Conde Nast Traveler World Savers Congress in New York on 23 September. The winners will also feature in the magazine’s September issue.

CC Africa is an ecotourism company with over 45 safari lodges across Africa. It established Phinda in 1991, on 57 000 acres of degraded and empty bushveld. Nearly all the animals had been killed by farmers, ivory hunters, and a misguided government project to eradicate the tsetse fly.

The company’s ambitious bush rehabilitation and wildlife restocking programme soon turned the wasteland into a thriving wilderness. Over 2 000 animals, from six-ton elephants to white rhinos, cheetahs, lions, giraffes, zebras, wildebeest and buck, were moved into the reserve – a massive undertaking in logistics and animal management. Phinda’s success in restoring natural African ecosystems has become a model for similar projects across the continent.

Black rhino transferred to Phinda by the World Wildlife Fund – 15 of just 3 500 left in the world – flourished and began to reproduce. CC Africa is now focusing on small carnivores such as servals and jackals, which may not have the star appeal of big game but are just as integral to the ecosystem.

Located in the north of KwaZulu-Natal province, the reserve has seven distinct ecosystems and an impressive collection of plants, birds and wildlife – including Africa’s Big Five, the lion, leopard, elephant, rhino and buffalo. Other animals that can be spotted include the cheetah, giraffe and a variety of buck species. On night drives visitors can also see the nocturnal aardvark, bushpig and bushbaby.

Sandwiched between Mkuze Game Reserve and the Greater St Lucia Wetland Park, a Unesco World Heritage Site, Phinda has 380 bird species, while the marine diversity off the nearby coast of Sodwana is said to give Australia’s Great Barrier Reef Australia stiff competition.

CC Africa is a leader in environmentally friendly tourism, or ecotourism. The International Ecotourism Society defines ecotourism as “Responsible travel to natural areas that conserves the environment and improves the well-being of the local people.”

According to CC Africa, ecotourism is the implementation of good tourism practice that minimises impacts, improves environmental and cultural awareness, creates positive experiences for both travellers and Africa’s people, ensures direct financial benefits for conservation efforts and provides financial benefits and empowerment for local people.

The company says tourists wanting the safari experience should be environmentally aware, and should choose a lodge or safari operator committed to the principles of ecotourism. Tourists should also take the time to acquaint themselves with the culture of rural people in the area they visit, in a bid to possibly also influence their own communities when they return home, teaching them more about the world.

Phinda received its honourable mention in the education category for a broad range of educational projects it runs in the local rural community, from school-building to bursaries. It has built more than 90 new classrooms and renovated many more, constructed three libraries and a science laboratory, and provided playground equipment, toys, school supplies and more than 150 000 books to local schools.

There is no restriction on the field of study; students may take any career path they choose. A condition of the scholarships is that students must return to their rural homes during terms breaks to carry out different types of community service, depending on the subjects they are taking.

Conde Nast gave the game reserve an honourable mention in the health category of the World Saver awards for its medical clinic, HIV/Aids programme, and water safety and nutrition interventions. The Mduku Clinic, set up by the Africa Foundation, operates 24 hours a day and serves 42 000 local people every year.

Phinda has also started a health programme to help villagers prevent the spread of HIV/Aids, help the HIV-positive and care for those with full-blown Aids. It has also distributed some 233 “hippo water rollers” to help women to transport clean water from distant wells. The water rollers are drums with a capacity of 90 litres each. This is a vast amount of water, compared to the usual five-litre containers carried on the heads of women and children.

In 2003 CC Africa launched the Positive Health programme to provide health education to their staff and extended families, committing over US$100 000 (R771 000) to initial training and support. The project is inspired by David Patient, the world’s longest HIV-positive survivor, and research psychologist Neil Orr.

In February 2008 Phinda also launched a skills and health centre at the Mduku DevCentre, located just outside the game reserve. Sponsored by insurance company Hollard, the project aims to see to the urgent and educational needs of the community.

During the launch, local community members were given samples of healthy food such as pumpkin seeds, sunflower seeds, fruit and aloe juice during discussions on the importance of a healthy diet. Two new Positive Health products were also launched: fortified e-Pap – pap, made from maize or corn meal, is a South African staple food – and e-Soup, a simple and easy-to-make soup, packed with the necessary vitamins.

Phinda’s honourable mention for poverty alleviation was won for its ranger training school. It is the only safari company to have such a programme, and many of its graduates become trackers at the reserve.

Another South African travel business, the luxury Twelve Apostles Hotel and Spa in Cape Town, was also given an honorary mention for poverty alleviation. The hotel sources 80% of the goods in its gift shop from local craft groups, which teach poor women skills such as papermaking and beading.

A number of other tourist destinations received Conde Nast World Saver awards and honourable mentions. The overall winner in the poverty alleviation category was Campi ya Kanzi, a Kenyan safari camp that is powered by solar energy and primarily staffed by members of the local Maasai tribe.

The camp was set up by Luca Belpietro, managing director of an Italian consulting firm, in 1996. His aim wasn’t to make a fortune out of wealthy tourists; rather, it was to ensure the protection of the wilderness, the wildlife, and Maasai culture. He made a deal with the Maasai on the Kuku Group Ranch: if they would set aside 280 000 acres as a nature reserve, he would finance a solar-powered safari camp that they could staff.

Once the camp was running, Belpietro started the Maasai Wilderness Conservation Trust, which has helped build schools, sponsor scholarships, pay for medical supplies, and employ game scouts. Last year, Campi ya Kanzi injected some $650 000 (R5-million) into the community.

Located in an area between Amboseli and Tsavo National Parks, the camp offers a luxury-tented experience for about US$500 (R3 850) a night. It features Maasai-led walking safaris, giving visitors the thrill of tracking game on foot.

In neighbouring Mozambique, the Nkwichi Lodge received an honourable special mention in the education category. Through its community work, the lodge has constructed and refurbished primary schools in seven surrounding villages, providing a better learning environment for 800 children. It has also helped build a clinic and a number of roads.

Established in 1999 as a private company and community trust, the project involves 20 000 local Nyanja people in carving out a huge conservation area along the shores of Lake Niassa.

In Tanzania, tour operator Abercrombie & Kent received an honourable mention in the education category. Through their foundation Friends of Conservation, they support a number of environmental and social causes, including opening a school for 600 children. They also fund environmental learning centres and conservation clubs in 50 Maasai schools in Kenya.