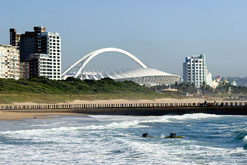 Durban’s Moses Mabhida stadium is
hailed as a masterpiece of design
and technology.
(Image: MediaClubsouthafrica.com. For
more free photos, visit the image library)

Although the 2010 Fifa World Cup has come to an end, experts say the spirit of it will endure in the sporting achievements and many humanitarian initiatives which have sprung up around it, and the lasting improvements in infrastructure and technology.

This is the view of a number of academics and IT specialists, who gathered at the Wits Business School (WBS) in Johannesburg in July to discuss relevant aspects of the World Cup legacy. The meeting was held under the auspices of the WBS Strategic Management of Innovation Seminar Series in conjunction with the Joburg Centre for Software Engineering (JCSE).

Hosting the World Cup called for much of that attitude in order to meet with Fifa’s exacting specifications – but it’s also an approach that will enable South Africa to reap the benefits of its multi-billion-rand investment in years to come.

Caribbean-born Prof Gillian Marcelle, head of strategy and innovation at WBS, chaired the panel. She explained that the Strategic Management of Innovation seminar series group meets every two months to discuss ways of getting innovative ideas out to the public. Typical topics include biotechnology, infrastructure and entrepreneurship.

“It’s a completely open group and everybody is welcome to join us,” said Marcelle. “You just have to have an interest in innovation.”

The experts gave their views on how the World Cup has benefited South Africa in terms of the many improvements in infrastructure and technological systems, and how these improvements could be efficiently used in the future.

“South Africa has once again demonstrated its ability to pull off the big one,” said Schofield. “Why can’t we achieve this level of success in areas such as education, security, health or job creation? Perhaps the real innovation lies in motivating government processes to achieve these outcomes.”

As proof of South Africa’s innovative skills, Schofield mentioned the design of new stadiums and the communications infrastructure that connects the magnificent buildings, Fifa offices, and broadcasters to the impressive International Broadcast Centre (IBC) and IT Control Centre in Johannesburg.

“Yes, it was a Fifa requirement, but South Africa put it together,” said Schofield, adding that it was unfortunate that Fifa saw fit to import much of the expertise. “But I hope that our local industry has watched and learned all that it could. For instance, with high-definition and 3D television, we should now be thinking not only of manufacturing the hardware, but of developing suitable content.”

The one area where technology failed, said Schofield, was in the ticketing system, the complexity of which was ill-suited to Africa, and was not adapted by Fifa until it was almost too late. “It was a good opportunity for local ticketing companies, but sadly they missed out.”

Schofield discussed ways in which all this new technology can be put to good use, but added that it would require some imagination. “The IBC broadband infrastructure cannot be wasted, and it would be a great idea to build a hi-tech campus on that site, once the moveable equipment has been taken away.”

Schofield also described the fan park sites as areas with great potential for outdoor entertainment venues and cinemas, or even places where communities can gather to learn more about important government programmes.

The stadiums present another challenge, he said. With their cutting-edge technology they should not be limited to hosting just rugby and football matches. “We could turn them into support structures for local schools, using them as giant classrooms or extra sports fields.”

This is especially fitting, he said, in light of the fact that one of Fifa’s most publicised legacy goals of the tournament is education.

“The stadiums also hold great promise as focal points for surrounding communities, by hosting internet cafes or health clinics, for example. We mustn’t starve ourselves of the opportunities presented to us by the World Cup, but rather, turn them to our maximum advantage.”

Dimension Data’s Mathen shared a few of the World Cup’s highly specialised IT developments with the audience.

“Although for me, one of the greatest legacies was in the social aspect,” he said. “I wasn’t too excited until the opening ceremony, but now I value the opportunity to have met so many new people.”

The 415 000 jobs created, the cumulative global audience of around 26.9-billion, the boost to South Africa’s economy – while these are all factors that cannot be ignored, said Mathen, there are other aspects that are equally impressive.

“The infrastructure development and upgrades to national roads has changed my life. There have been huge improvements made to roads, airports, stadiums and hotels, as well as our communications capability. Emergency services disaster centres in major cities have been upgraded, which allows for a better coordinated effort when it comes to managing disasters.”

In terms of safety and security, said Mathen, the South African Police Service created a dedicated 2010 team of 41 000 members, while the police reservist force is to grow from 45 000 to around 100 000.

Other safety and security benefits are less noticeable – yet no less significant. “South Africa’s e-border system is one of only three in the world that works on a cloud computing platform. It constantly scans international databases to keep track of potentially undesirable people as they travel.”

Mathen said that eThekwini, or Durban, is now a digital city with one of the world’s top fibre-optic cable networks. “The city can now offer smart connect services to small businesses, and runs more efficiently in general.”

The recent broadband developments and newly operational undersea cables have opened up tremendous opportunities. “We have great broadband capability – but entrepreneurs now need to come up with ideas to utilise it.”

Mathen also mentioned that during the World Cup, South Africa became one of the highest “tweet” sources in the world, referring to the Twitter social network phenomenon. “We averaged around 750 tweets per second, with some 3 500 going out every second during World Cup matches.”

He described Johannesburg’s Soccer City as the largest World Cup stadium ever built. “It has 17-million tons of steel and 11-million bricks – all sourced locally. We have thousands of workers now trained in construction skills.”

Turning to the Cape Town stadium, the jewel of the city, Mathen talked about the various systems installed in the showpiece to ensure fans’ safety. “It has a facial recognition surveillance system that can send instant alerts to the police if a wanted individual is spotted on the closed circuit television system. The stadium’s electronic ticketing system and intelligent fire management systems are world class. Even the police vehicles have cutting-edge systems that allow them to travel up to 160 kph while doing facial and number-plate recognition.”

The Cape Town stadium is also highly energy efficient, he said, and is run by an intelligent building management system.

And the expertise gained by South Africans working on these projects has not been wasted. “As a result of the work done during the World Cup, our people have been consulted by agencies working on future events such as the next Fifa World Cup in Brazil in 2014, and the two upcoming Rugby World Cups.”

Doctoral candidate Mabaso talked about other legacy aspects such as improvements to the border control system developed in 1985, and still used successfully today by border officials.

“Although improvements have been made over the years, the system received a big jump for 2010,” he said. The new movement control system was responsible for thwarting the plans of a number of identified hooligans, who tried to enter the country during the World Cup.

The country also implemented other innovations such as hand-held passport processing devices at international airports, which can service new arrivals while they’re still standing in the queue. These were piloted in South Africa during the 2009 Fifa Confederations Cup.

“Other long-term legacy aspects,” he said, “are the development of sustainable technologies, and a boost in confidence in South Africa both internally and externally. There are one or two more negative aspects such as the possibility of white elephants, but these can be overcome with some imagination.”

Gillian Saunders talked about tourism aspects of the World Cup, saying that official data would only be released later in the year, but meanwhile the company had projected just under 400 000 World Cup visitors, using ticket sale figures.

“We took the number of ticket sales versus the average number of games a visitor would watch, a figure gleaned from previous tournaments, and came to a result of about 373 000 visitors.”

The tourism spend, said Saunders, was up by 0.48% compared to normal July figures, and the GDP would benefit by an additional 1.72% in total.

“We also can’t ignore the profiling of South Africa on the world stage, helped by the presence of 18 850 media professionals in the country. We’ve benefited from increased national pride and a new can-do attitude, and we’re also seeing more football development as well as football and rugby integration.”

The World Cup, said Saunders, would give South Africa the opportunity to grow its event and leisure tourism sector, as the tournament has given the country access to new markets and new countries.

“We’ve also broken new ground in cyberspace. We’re the first World Cup to make extensive use of social media,” she said, adding that for the first time Africa is seen internationally as a place with a realistic growth potential.