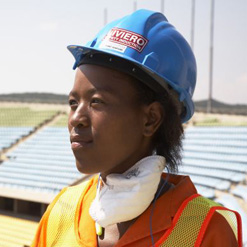 A construction worker at the Royal
Bafokeng Stadium, North West, which is
being upgraded for the 2010 Fifa World
Cup. South African government policy
dictates that women must be employed in
public infrastructure projects.
(Image: Hannelie Coetzee,
MediaClubSouthAfrica.com. For more
free photos, visit the image library.)

South Africa’s national Women’s Day on 9 August every year pays tribute to a defiant throng of 20 000 women who, in 1956, marched against unjust apartheid legislation. The country has undergone dramatic change since that demonstration, but as a woman I can’t help but wonder whether today we actually are truly free and equal players in the government and economy.

When Nelson Mandela became South Africa’s first democratically elected president in 1994, he set the tone for gender equality in the country by declaring there would be no freedom without the total liberation of women in society.

“It is vitally important that all structures of government, including the president himself, should understand this fully that freedom cannot be achieved unless women have been emancipated from all forms of oppression,” he said.

Most South African women would agree that in the last two decades they have enjoyed more equality with men – and statistics back this up.  According to the 2007 Social Watch Gender Equity Index, which focuses on economic activity, empowerment and education, South Africa came 42nd out of 154 countries and was placed second in Africa after Rwanda, which ranked third in the world.

Mixed bag for women in government

Since the advent of democracy, South Africa has made great strides in gender equity in government. According to a United Nations Human Development (UNHD) 2005 report, 41% of the South African government’s ministers and deputy ministers are women. This compares well to Sweden (52%), Spain (50%), Finland (47%), Germany (46%) and Norway (44%).

What makes the UNHD figure more significant is that female Cabinet members occupy non-stereotypical positions: the minister of foreign affairs and minister of minerals and energy are women and the deputy president, Phumzile Mlambo-Ngcuka, is also female.

Like his predecessor, current South African President Thabo Mbeki feels strongly about the role of women in government. “No government in South Africa could ever claim to represent the will of the people if it failed to address the central task of emancipation of women in all its elements, and that includes the government we are privileged to lead,” he said.

However, the UNHD report also reveals the percentage of women in parliament could improve, as only 33% of seats in the national legislature are occupied by females.

With the large number of female ministers and deputy ministers, it comes as no surprise that in total the South African government employs more women than men. According to the Businesswomen’s Association (BWA) 2008 Census, the number of women in government across all salary levels is 649 718, or 55% of the total, compared to 536 688 men (45%).

However, the number of women at senior level is less satisfying at 34%, falling short of Cabinet’s goal to have 50% of management posts in the public service allocated to women. But the percentage grew by 2% from March 2007 to March 2008, edging slightly closer to the target.

Although things are looking up, a point of concern highlighted by Yvette Montalbano, chief executive of the BWA, is the disparity in salary levels between men and women in government.

“In our studies we’ve seen that particularly in government, unfortunately, although the equitable representation of women is there, it doesn’t translate into the salary representation. Men by far are earning more than women are,” she said.

Gender and the judiciary

Judge Navanethem Pillay may be South Africa’s best case of gender equity in the judiciary – her name hit the headlines recently when she was appointed as the United Nations High Commissioner of Human Rights – but her female counterparts aren’t faring too badly either.

Before 1994, only one woman had served as a judge in the country. By 2005, women constituted about 28 of 207 of the judges, one of whom was a deputy judge president.

According to the 2008 BWA report, women make up 51% of South Africa’s total population aged between 15 and 65, but only 43% of the employed population is female. A 2006 South African labour force survey recorded an official unemployment rate of 21% for men, and 31% for women.

“The fight that the women marchers of 1956 embarked on is in many ways still relevant to the situation today. Those women were not only fighting for political emancipation but economic emancipation as well,” said Deputy President Phumzile Mlambo-Ngcuka.

The BWA Census shows that although there has been a steady increase in the percentage of women employed in top executive positions, females are still outnumbered in corporate South Africa.

That said, it must be noted the report reveals a significant increase in the number of corporate businesses employing 25% or more women directors and executive managers, from 31 companies in 2007 to 58 companies in 2008. It also reveals that the percentage of females in executive management increased from 14.7% in 2004 to 25.3% in 2008. So, in real terms this number has grown from 739 to 1 227 women.

But the BWA says this is far from satisfying. In a group of 5.3-million working women, only 419 are directors, 13 have made it to the position of CEO and the same number are chairs of a board. Consider that the country’s 7.3-million working males produce 3 618 executive managers and 2 505 male directors, and these figures appear all the more grim.

“Over a five-year period we vacillate between 11 and 15 and 13 women chairs of boards, and we go from four to seven chief executives and we shout ‘hooray’. That’s in a sample group of over 300 companies – it’s just not acceptable,” said Montalbano.

Women as a global workforce

South African women, however, are not alone in their fight for gender equality in the workplace. Surveys show that unequal salary scales, a small number of women in senior positions and a higher unemployment rate among women are global problems.

The 2007 Grant Thornton International Business Owners Survey (IBR) revealed that internationally, 38% of businesses do not have any women in senior management positions. The survey, which covers the opinions of 7 200 privately owned businesses in 32 countries, represents 81% of global gross domestic product.

According to the IBR survey, South Africa is performing well at 77% of businesses employing women in senior management roles, in contrast to the global average of 65%. Additionally, South Africa’s women are better represented than those in developed countries such as the US (69%), Canada (66%) and the UK (64%), where gender equality is generally perceived as being well established.

The survey also showed that 29% of total senior management posts in South Africa are filled by women, beating the global average of 24%. So although South African women have come a long way in their struggle for economic liberation, together with other women on a global scale, they still have a long battle ahead.