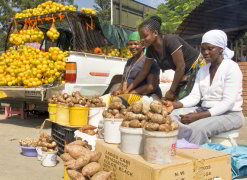 The economic empowerment of women
is to get special attention during this
year’s Women’s Month programme.
(Image: MediaClubSouthAfrica.com. For
more free photos, visit the image library) 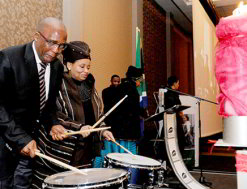 Health Minister Aaron Motsoaledi and
Minister for Women, Children and People
with Disabilities Lulu Xingwana beat
drums to inform the nation to heed the
call of the 2011 Women’s Day campaigns.
(Image: GCIS) 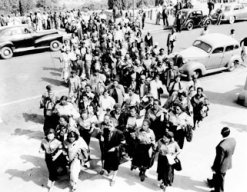 Women converge on the Union Buildings
in 1956 to voice their protest against
the demeaning pass laws of the time.
(Image: African National Congress)

This year’s Women’s Month programme will focus on empowering the country’s women, said Minister for Women, Children and People with Disabilities Lulu Xingwana at the launch of the month-long event.

“We will use Women’s Month to highlight the economic empowerment of women as a critical element of success for South Africa’s efforts to achieve the targets on economic growth,” said Xingwana. “This includes the creation of five-million jobs within the next 10 years, as outlined in the New Growth Plan.”

The 2011 programme emphasises the role of women as equal partners in the economic, social and cultural development of society, and also aims at ending economic marginalisation of women.

The highlight of the month is the observation of the annual National Women’s Day on 9 August and this year the celebrations take place under the theme Working together to enhance women’s opportunities to economic empowerment.

The day – and the month – commemorates the epic march, on 9 August 1956, of 20 000 women to the Union Buildings in Pretoria, the seat of South Africa’s government.

The women were protesting against the proposed amendments to the Urban Areas Act, commonly known as the pass laws of 1950. The pass book, a demeaning requirement, was an identification document that black people were ordered to carry around with them at the time.

The feisty group left bundles of petitions containing more than 100 000 signatures at the office doors of then-Prime Minister JG Strijdom, and stood silently for 30 minutes outside his office.

En route the women sang a protest song that was composed especially for the occasion and aimed at Strijdom – “Wathint’ abafazi, wathint’ imbokodo!” (You strike a woman, you strike a rock).

In 2006, a re-enactment of the march was staged for its 50th anniversary, with many of the veterans reprising their roles.

Addressing the status of women in South Africa

This year’s Women’s Month kicked off with the three-day National Women’s Conference of more than 800 women from across the country. The conference is taking place in Boksburg, east of Johannesburg, from 1 to 3 August.

The conference creates a platform for engagement on key issues affecting the status of women in the country.

Xingwana said the objective of the gathering is to discuss and resolve key policy considerations to be included in the Gender Equality Bill, which is being developed to increase women’s participation in all sectors of society.

Deputy President Kgalema Motlanthe, said Xingwana, is expected to respond to key issues raised by women when he delivers the conference’s closing address.

Another conference that centres on the economic empowerment of women, said Xingwana, will take place on 11 and 12 August at the International Conference Centre in Durban, KwaZulu-Natal.

She said that the event will review progress and identify measures needed to advance women’s empowerment as a prerequisite for global economic competitiveness.

This year, South Africa lost Albertina Sisulu, and Nonkumbi Bertha Gxowa died in November 2010. Both stalwarts were part of the 20 000-strong group that protested outside the Union Buildings in 1956.

Xingwana said: “We owe it to Mama Gxowa and Mama Sisulu, and many other fallen heroines of the struggle for gender equality and freedom, to make this Women’s Month programme a success.”

On 18 August, said the deputy minister of Human Settlements, Zoliswa Kota-Fredericks, her ministry will hand over 55 of the 1 956 houses built in the town of Brandfort, Free State province, to commemorate the 1956 women’s march.

Brandfort is where Winnie Madikizela-Mandela, the former wife of Nelson Mandela and a struggle veteran in her own right, was put under house arrest in 1977 by the apartheid government.

The Department of Public Works will also run a programme encouraging indigenous building methods in Limpopo. These techniques were traditionally led by women.

The departments of Trade and Industry, Correctional Services as well as Social Development, to mention but a few, also have a line-up of activities to celebrate Women’s Month.