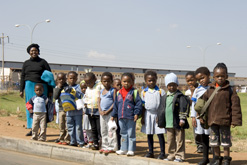 Communities are to benefit from a new
national anti-poverty initiative, which will
aim to reduce crime. (Image:
Chris Kirchhoff, MediaClubSouthAfrica.com.
For more photos visit the image library.)

President Thabo Mbeki has announced a nationwide anti-poverty initiative that will see the government stepping in to help South Africa’s poorest in all nine provinces. The drive will be launched in August 2008 under the auspices of Vice-President Phumzile Mlambo-Ngcuka.

The statement came after the conclusion of the annual mid-year Cabinet lekgotla held in late July in Pretoria, which brought together key decision makers in government, including ministers and deputy ministers, premiers, and other officials. The lekgotla is held every year to review progress in implementing the government’s Programme of Action, which is an extensive effort to address issues such as tax relief, food prices, access to basic services and health care, as well as to identify interventions to speed up implementation.

A lekgotla (Sesotho, meaning “meeting place”) is derived from the concept of public village meetings, usually presided over by the village chief. It can also refer to a traditional court of law as well as the actual meeting venue. In Setswana it’s known as kgotla, meaning “court”. In political terms a lekgotla is a strategy or long-term planning meeting of leaders and is also known as a bosberaad (Afrikaans, “bush summit” referring to the fact that such meetings are often held in remote venues where participants are unlikely to be disturbed).

Mbeki, who is entering the final stretch of two four-year terms in office, said those wards and households most in need would be identified and visited to exactly establish the level of assistance necessary.

The president added that a war room on poverty has also been set up. In his State of the Nation address in February 2008 Mbeki announced the intention of the government to establish an anti-poverty war room, which will initiate specific interventions to relieve, prevent and reverse poverty.

“For this, we will require a National War Room for a War Against Poverty”, he said on that occasion, “bringing together departments such as social development, provincial and local government, trade and industry, agriculture and land affairs, public works and health, as well as provincial and local administrations, which will work with non-governmental organisations and business to identify the interventions required in specific households and implement them as a matter of urgency.”

Among the measures proposed are greater self-employment in South Africa’s second economy, especially among households and women, income security for the vulnerable, access to infrastructure, a focus on early childhood development, getting drop-outs back into school, and adult basic education and training.

Another significant outcome of the lekgotla, said Mbeki, is the approval by Cabinet of a draft framework, which will now go out for consultation, for a national food control agency.

“This arises out of the concern about the high and rising food prices and their impact on the poorest in the country,” he said. “Therefore you need an agency, which is kind of more permanent, less ad hoc, with greater capacity to look at the entirety of the food system, not only as it affects us, but within the global context.”

The agency will be tasked with studying and analysing the ever-rising food prices and making relevant recommendations to government to alleviate the situation, which hits the poor hardest of all. Government figures put the number of South Africans living below the poverty line at more than four-million.

Mbeki also announced the creation of a task team to review the criminal justice system and the issue of juvenile offenders. He said that there are 3 478 children in detention in South Africa, 820 of whom have been sentenced and are in correctional facilities.

Government has resolved to continue to strive for a 7-10% reduction in South Africa’s contact crime rate, a target that was set in 2004. To date crime has decreased by an average of 7% each year since then.

Crime statistics released in June 2008 indicated that all categories of contact crime – common robbery, rape, attempted murder, aggravated robbery, common assault, murder, assault with grievous bodily harm, and indecent assault – have decreased. However, the levels of crime are still unacceptably high, said Minister of Safety and Security Charles Nqakula. Although murder is at its lowest levels since 2003, other types of crime such as business and home robberies, as well as car and truck hijackings, are on the increase.