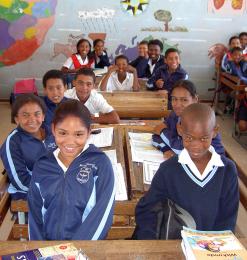 A number of South African media houses together with the national Department of Education (DoE) received a prestigious award at the annual World Association of Newspapers Readership Conference held in mid-October 2008 in Amsterdam.

Top honours went to the Polish daily Gazeta Wyborcza, which scooped the World Young Reader Newspaper of the Year award, while the group of four South African publishing companies and the national education body took the coveted Public Service award.

The DoE and Independent Newspapers, Media 24, Avusa, and the Associated Independent Press were acknowledged for their proactive “National Teachers Strike Recovery Initiative” after the May 2007 strike all but brought education to a halt for six weeks. Representing 20 newspapers from across the country and a combined readership of almost 1.5-million, the companies worked together to rescue millions of pupils who were left stranded by teachers rebelling over a wage dispute.

Learning material had to be quickly compiled from the current curriculum and adapted for all grades, socio-economic sectors and geographical locations. The DoE funded the initiative, paper manufacturer Mondi subsidised the newsprint, and the Learning Channel, an NGO that produces televised educational programmes, developed the revision material. The NGO also provides educational supplements for download on its website. The newspapers themselves sponsored all distribution and logistical costs

Study Mates, for grades 1 to 11, and Power Your Future, for grade 12, were published in the newspapers once a week and were gratefully received by pupils and those teachers who, at their own peril, stuck to their task in spite of threats and intimidation from their colleagues.

Matrics were a particular focus of the supplements, which included not only learning material but also profiles of role models, career advice and previous sets of exam questions and answers.

The material was also used by disadvantaged students to bring their studies up to a more satisfactory level. Although all South African students, from both privileged and disadvantaged backgrounds, write exactly the same exams, there is often a substantial difference in their ability to prepare for their exams, as those from poorer communities struggle to afford textbooks and other essentials. In many cases the newspaper material was the only resource available and not only prevented students from falling further behind in their learning but helped many of them advance more than they could have under normal circumstances.

Published material has since been adopted as an integral part of the teaching process and is used by pupils as key study tools for exams. So successful was the project that the Department of Education decided to extend it into 2008.

According to the judges, the project was a win-win situation, and one that cut through red tape when speed was called for in a crisis situation. “It tackled a national problem with love and was also financially beneficial to those who conducted it,” said the judges.

South African Minister of Education Naledi Pandor said, “I am delighted that this international award recognises our efforts to support high-quality learning. I wish to congratulate and thank all those newspapers involved in responding to our call to support our young learners.”

The World Young Reader Prizes are presented annually by the World Association of Newspapers, a Paris-based organisation that defends and promotes freedom of the international press as well as the professional and business interests of newspapers world-wide. Its members number over 18 000 newspapers, 77 national newspaper associations, 12 news agencies and 11 regional and world-wide press groups in 102 countries.

The Young Reader programme has been running since 1998 and honours those newspapers who, in the opinion of the judges, have devised the most innovative project or activity in the 24 months between award ceremonies, in one or more of the main areas of young readership development. These are editorial; making the news; literacy and newspapers; public service; and brand. In 2009 a new category will be introduced – press freedom.