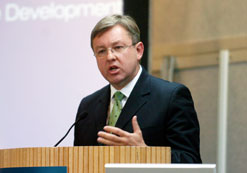 The Presidency announced in March that after consideration, it had nominated Van Schalkwyk to take over from the outgoing executive secretary Yvo de Boer, who has been at the head of the organisation since 2006.

Earlier in 2010 De Boer announced his retirement from the UN position to join consultancy giant KPMG as their global advisor on sustainability and climate. He will take up his new post on 1 July 2010.

Van Schalkwyk is regarded as a strong contender for the position, having gained extensive experience in dealing with climate-related issues in his previous post as minister of environmental affairs and tourism.

The Presidency reported that it had received requests from a number of outside parties – including governments, corporations and NGOs in both the developed and developing world – for Van Schalkwyk to be made available for nomination for this prestigious post.

President Jacob Zuma and Van Schalkwyk have already met to discuss the matter.

Should his bid be successful, the minister will face a tough job in getting the 192 members of the UNFCCC to agree on the effects of climate change and unite to implement strategies to counter the global phenomenon.

In the wake of the 2009 climate conference held in Copenhagen, which failed to produce any realistic or legally binding emission-reduction target between participating nations, Van Schalkwyk will have his work cut out for him to bring the members of the UNFCCC into accord. De Boer is of the opinion that a new climate deal will not be struck before 2011.

Van Schalkwyk will also have to restore the faith of developing nations, who also widely condemned the failure of the Copenhagen talks to provide any real hope of assistance for them from developed nations.

However, as environmental affairs minister, a post which he held until after the general elections of 2009, Van Schalkwyk earned respect as a fighter for developing nations, and for leading South Africa in a number of progressive climate change initiatives that elevated the country as a champion for good environmental practices.

Among his achievements are the implementation of a Black Economic Empowerment scorecard and charter for tourism, the launch of a new environmental protection fleet to counteract illegal fishing, the enforcing of the 2004 Air Quality Act, and the banning of the use, import and export, and manufacturing of asbestos and asbestos-containing materials.

In 2008 he assumed the rotating presidency of the biennial African Ministerial Conference on the Environment, a gathering of African ministers of the environment, at its 12th session, which took place in Johannesburg.

“Our message for this gathering is that we are ready to assist in shaping and building a cohesive African environmental agenda,” said Van Schalkwyk in his acceptance speech.

He therefore has the understanding and the experience needed to effectively punt the needs of developing nations, ensuring they do not get pushed aside in the global climate debate.

Towards the end of next year South Africa hosts the 2011 Conference of the Parties, an annual meeting of the members of the UNFCCC. To have a South African at the helm of global climate negotiations would be fitting, and, said the Presidency, “an honour and a privilege”.

The UNFCCC arose out of the 1992 UN environment summit, known as the Earth Summit, which took place in Rio de Janeiro. The treaty was established with the main aim of stabilising the world’s greenhouse gas emissions, and came into force in March 1994.

The UNFCCC’s 192 parties are classified as Annex I or Annex II members. Annex I countries are seen as industrialised economies or economies in transition. Annex II countries have developed economies and are able to help developing countries financially with initiatives that fall under the UNFCCC.

To date, 40 Annex I and 23 Annex II countries have become parties. There are also a number of non-Annex 1 parties, of which South Africa is one – these are mostly developing nations who are dependent on assistance from wealthier nations.

The UNFCCC itself has no compulsory carbon emission limits to which members are expected to adhere, but its main instrument, the 1997 Kyoto Protocol, does set legally binding targets for carbon emission reduction for its own 184 members.

The UNFCCC secretariat is based in Bonn, Germany.