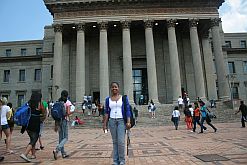 Young people in Mpumalanga will soon
enjoy the pleasure of enrolling at a
university that’s not far from their homes.
(Image: Bongani Nkosi)

South Africa’s Mpumalanga province is set to get its first university, which will help develop a skills base in the area and retain school-leavers, who currently have to relocate elsewhere in search of quality tertiary education.

David Mabuza, the province’s premier, announced government’s undertaking in his State of the Province address in Nelspruit on 19 February.

“I am privileged to announce that national government has granted permission for the establishment of a fully fledged university in the province,” Mabuza said.

At the moment the Northern Cape and Mpumalanga are the only two provinces in the country without established universities.

Plans for the academic institution, likely to be known as the University of Mpumalanga, are beginning to take shape, but provincial government is yet to announce when construction will start, said Mabuza’s spokesperson, Mabutho Sithole.

Mabuza told the Sowetan in early February that his office and the national Department of Higher Education and Training have agreed that a university in the province is an urgent priority.

While it’s certain the main campus will be in Nelspruit, Mpumalanga’s capital, authorities are still in the process of identifying suitable land, Mabuza told the newspaper.

“We will work together with the Minister of Higher Education, Dr Blade Nzimande, to take this process forward,” Mabuza said in his address, which marked the opening of the Mpumalanga legislature.

The university will have various campuses across the province and at least one centre in each of the three municipal districts: Nkangala, Gert Sibande and Ehlanzeni. Faculties will be similarly spread, with the former KwaMhlanga College favoured for education, Sithole said

“Faculties such as engineering, science and agriculture will be spread throughout various parts [of the province],” Mabuza added.

There are also plans to establish an extensive tertiary hospital alongside the Nelspruit campus to “ensure that our healthcare taps into the wealth of research and skills from the university”, Mabuza said.

The hospital will be designed with various units currently lacking in the province’s public hospitals, so fewer patients will have to be transferred to Gauteng for treatment.

“We intend to drastically cut down on the number of unnecessary referrals among the different levels of healthcare facilities,” Mabuza added.

At the moment school-leavers in Mpumalanga are often forced to relocate to other provinces to study further.

After repeated calls by youth organisations for universities to be built in Mpumalanga and the Northern Cape, Nzimande assured the South African Students Congress in December 2009 that “the process is on track”.

The Department of Higher Education and Training aims to double matriculant enrolment in the country’s tertiary institutions over the next five years, so building universities in Mpumalanga and the Northern Cape will help meet this target.

At the moment the only options for Mpumalanga-based students are TUT and the Vaal University of Technology – which offer limited courses through satellite campuses there; three Further Education and Training centres; and a handful of private colleges.

Mabuza is certain a university in Mpumalanga will, among other things, help develop skills in the province.

“In part, the establishment of a university in Mpumalanga will, in the long-term, contribute to knowledge generation, research and development, as well as training and skills development,” he said.