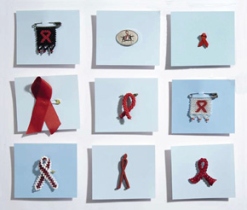 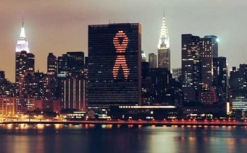 The Aids ribbon emblazoned across the UN
building in New York during the first
special session of the General Assembly to
discuss Aids, held in 2001, 20 years
after the discovery of the disease.
(Image: UNAids)

In a recent United Nations report on HIV/Aids, South Africa is named as one of three countries in the Southern African region where the HIV infection rate is stabilising. The other two are Malawi and Zambia. Overall, the biennial report, published on 29 July 2008 by the Joint United Nations Programme on HIV and Aids (UNAids), carries both positive and negative news in terms of the African situation.

The report also notes that in the region as a whole, infection among women is far greater than men, especially among the younger generation, although globally the incidence of women living with HIV has remained stable at 50% for a number of years.

Heterosexual intercourse is still the major route of transmission in sub-Saharan Africa, but studies have shown that homosexual intercourse may play a more important role than previously thought. In East and Southern Africa drug use is another factor, with the infection passed on mainly through contaminated equipment.

Despite the fact that South Africa still has more people living with HIV than any other country in the world, statistics indicate this number seems to be stabilising at 5.7-million. This is in line with the global trend.

UNAids does specify, however, that the actual number of people living with HIV continues to grow because of ongoing new infections and increasing access to antiretroviral therapy, which prolongs life. For instance, Namibia’s treatment rate soared from 1% in 2003 to 88% in 2007.

National statistics body Statistics South Africa (Stats SA) released its mid-year population statistics on 31 July 2008, putting the total population at 48.7-million and the estimated overall HIV prevalence rate at about 11%. Of this percentage, women between 15 and 49 years old form the largest group.

Differing slightly from UNAids figures, Stats SA puts the HIV-positive population at approximately 5.35-million. The most vulnerable population group is young women between 15 and 24 years of age, as they account for more than 90% of new infections in South Africa.

The epidemic in Malawi and Zambia has also reached a plateau, according to UNAids, but other Southern African countries are not as fortunate – Lesotho shows a higher HIV prevalence among pregnant women, while infections among young Mozambicans are on the rise and in some areas of that country 20% of the adult population is infected.

However, UNAids studies reveal that the epidemic in Zimbabwe has declined sharply, especially among pregnant women attending antenatal clinics. In this category the infection rate dropped significantly from 26% in 2002 to 18% in 2006, and among young pregnant women aged between 15 and 24, infection fell from 21% to 14% over that same period. The major reason for this is the practice of safer sex, as is the case in Malawi and Zambia.

Botswana also shows a lower rate of infection among young pregnant girls (15 to 19 years old), from 25% in 2001 to 18% in 2006, while figures for pregnant women in Angola show little change since 2004, indicating a possible stabilisation.

A number of East and West African countries, where the epidemic is comparatively smaller, have seen a stabilisation and in some cases a reduction in the HIV infection rate. Among these are Burkina Faso, Côte d’Ivoire, Mali, Nigeria, and Uganda. In Nigeria, Africa’s most populous country, the epidemic shows signs of stabilising at 3.1%. More health-conscious behaviour, especially the use of condoms and more efficient prevention of transmission from mother to child, notably in Benin, are among the reasons for the downward trend.

In a number of countries in Central and West Africa as well as the Horn of Africa, adult HIV prevalence dropped below 2% in 2007. However, this figure stands above 15% in seven Southern African countries (Botswana, Lesotho, Namibia, South Africa, Swaziland, Zambia, and Zimbabwe), and above 5% in seven other African countries (Cameroon, the Central African Republic, Gabon, Malawi, Mozambique, Uganda, and Tanzania). The worst-hit country is Swaziland, whose adult HIV prevalence of 26% is the highest in the world.

Fighting HIV/Aids on a global scale

Established in 1994, the Joint United Nations Programme on HIV and Aids (UNAids) is a major driver in the fight against Aids and HIV on a global scale. The organisation’s mission is to lead, strengthen and support a multi-faceted response to HIV and Aids, which includes preventing transmission of HIV, providing care and support to those infected, reducing the vulnerability of individuals and communities to HIV and alleviating the impact of the epidemic.

UNAids is based in Geneva, Switzerland. Belgian scientist, academic and activist Dr Peter Piot has headed the organisation since its inception.

The UNAids Report on the Global Aids Epidemic is published every two years and draws on the best data available. The 2008 report gathered information from 147 countries measured against 25 core targets adopted in the 2001 United Nations Declaration of Commitment on HIV/Aids and, says UNAids, is the most comprehensive assessment of the international response to HIV ever undertaken.