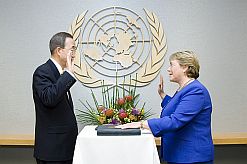 The creation of a new body, UN Women – or the UN Entity for Gender Equality and the Empowerment of Women – was celebrated on 30 January 2011 at the 16th Summit of the African Union (AU) in Addis Ababa, Ethiopia.

Speaking about the new entity at the summit, UN secretary-general Ban Ki-moon said: “There is progress here and there on the continent regarding women’s rights, but we must go much further to ensure greater gender equality in Africa. It is not just a matter of justice as the facts show indeed that gender equality is a factor of growth and social peace.”

Achieving gender equality was a key theme of the 2011 AU summit.

“We need to empower African women who produce food, raise children and drive the economy. When women take their rightful place at the negotiating table, in parliament and in leadership positions across society, we can unleash Africa’s enormous potential. UN Women is here to help reach this goal,” said the secretary-general.

Unveiling UN Women’s new logo at the summit, its executive director Michelle Bachelet said: “A vision of how much more is possible when men and women have equal rights and opportunities will drive UN Women. We will be bold and ambitious in our aspirations and we will also be practical in building an organisation that can make a lasting difference in women’s lives.”

Bachelet was Chile’s first woman president, serving her term from 11 March 2006 to 11 March 2010. She prioritised women’s issues during her tenure and has been working with the UN Development Fund for Women (Unifem) since leaving office.

UN Women was created in July 2010 at a UN General Assembly session and became operational on 1 January 2011.

UN Women will see to the development of women-friendly policies, and help member states implement and monitor them.

The choice of Mbasogo has been criticised as taking the AU back to the days when dictators led the now-defunct Organisation of African Unity. Mbasogo has ruled Equatorial Guinea with an iron fist for more than 30 years after executing his predecessor.

The UN secretary-general spoke about the unrest in Egypt and the political crisis in Côte d’Ivoire at the summit, but also commended the successful secession referendum in Sudan.

French President Nicholas Sarkozy said that France would continue to support development on the African continent.

“We continue to draw inspiration from their selflessness, commitment and dedication to this continent and its people,” added Zuma.