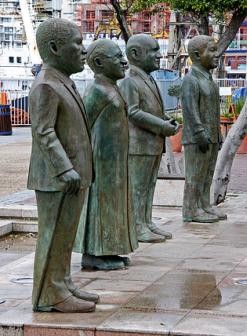 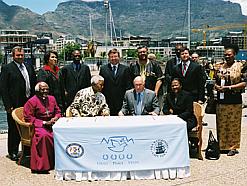 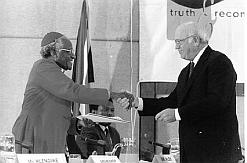 Former South African president FW de Klerk and Archbishop Emeritus Desmond Tutu were among 31 Nobel Peace laureates from 17 countries who issued an unprecedented joint statement on behalf of the Save the Children organisation, calling for assistance for children who are trapped in conflict zones around the world and are unable to go to school.

De Klerk and Tutu added their voices to the group of eminent peacemakers who have asked for the rights of some 37-million children around the world to be upheld. The laureates issued their statement in support of Save the Children’s global campaign, Rewrite the Future, which seeks to provide quality education for children affected by war. Many of these youngsters live in Africa.

Their call for action coincided with the 20th anniversary of the United Nations Convention on the Rights of the Child and Universal Children’s Day. The Rights of the Child convention is a legally binding instrument that sets out the full range of human rights – civil, cultural, economic, political and social – as they apply to children, defined as humans under the age of 18 years.

The four core principles of the document are non-discrimination; devotion to the best interests of the child; the right to life, survival and development; and respect for the views of the child. As the convention is legally binding, governments who agree to it commit themselves to ensuring that they make decisions always with the interests of children as a priority.

Not coincidentally, the statement was issued shortly before the 2008 Nobel Prize ceremony, which takes place on 10 December. The distinguished group includes former US president Jimmy Carter, His Holiness the Dalai Lama, Director-General of the International Atomic Energy Agency Mohamed ElBaradei, and courageous Kenyan social activist Wangari Maathai. A number of them were moved to add personal statements to the document.

“Too many children around the world continue to be exposed to violence and upheaval,” said United Nations Secretary-General Ban Ki-Moon on behalf of the organisation whose various divisions have won the Nobel Peace Prize on numerous occasions. “I commend the invaluable efforts of UN partners such as Save the Children, and welcome efforts to ‘rewrite the future’ and ensure that children and youth throughout the world receive the quality education that is their birthright.”

An advocate for human rights

Tutu has also spoken out in a public service announcement about the importance of the United Nations Universal Declaration of Human Rights on the occasion of the 60th anniversary of its adoption.

The public service announcement was produced in collaboration with The Elders, a group of 12 vastly experienced global statesmen that includes Tutu, Nelson Mandela, Graça Machel, Jimmy Carter, Kofi Annan, Mary Robinson, and Daw Aung San Suu Kyi. It will be released on 10 December 2008 and will be freely available for use by those who promote the cause of universal human rights.

Although they are innocent, children are among those most sorely afflicted by situations of conflict. For instance, out of the 9.6-million school-aged children in the Democratic Republic of Congo, 5-million were unable to attend school even before the recent fighting, and even more have been forced to abandon their education since.

In many parts of the world military organisations continue to recruit children as soldiers. Denied the childhood that is rightfully theirs, these youngsters know no other life except one of violence. According to Save the Children, each year of formal schooling attended by boys reduces the risk of their becoming involved in conflict by 20%, and the organisation’s Rewrite the Future programme is currently working in 20 countries, including Colombia, Afghanistan, Nepal, Sudan and Uganda, to make education accessible and safe for children in these strife-torn regions.

In Southern Africa three international branches of Save the Children – from the Netherlands, UK and Sweden – are active. Their work ranges from helping Aids orphans and young refugees from other countries, to ensuring that as many disadvantaged children as possible receive the education they deserve.

The four have recently been immortalised in bronze and wood by artists Claudette Schreuders and Noria Mabasa respectively, in the Nobel Square at Cape Town’s V&A Waterfront. The statues were unveiled at a ceremony on 16 December 2005, the Day of Reconciliation in South Africa.

Luthuli was honoured for his tireless efforts towards peace through peaceful means. Presenting the award, then-chair of the Nobel committee Gunnar Jahn said “If the non-white people of South Africa ever lift themselves from their humiliation without resorting to violence and terror, then it will be above all because of the work of Luthuli, their fearless and incorruptible leader who, thanks to his own high ethical standards, has rallied his people in support of this policy, and who throughout his adult life has staked everything and suffered everything without bitterness and without allowing hatred and aggression to replace his abiding love of his fellowmen.”

Luthuli described the honour as the most important event of his life. After finishing his Nobel lecture he burst into song with the isiZulu version of “Nkosi Sikelel’ iAfrika“, and was joined by other Africans in the audience. At that time the hymn, which was composed in 1897 by Methodist teacher Enoch Sontonga, was banned in South Africa but has since been incorporated into the country’s national anthem.

In 1984 Archbishop Tutu won the Peace Prize for his work to end apartheid, always seeking a peaceful solution. Egil Aarvik, chair of the Nobel committee at the time, said, “We feel ourselves united with him in the belief in the creative power of love. With his warm-hearted Christian faith he is a representative of the best in us all.”

And in 1993 President Nelson Mandela and former President FW de Klerk were jointly honoured for “their work for the peaceful termination of the apartheid regime, and for laying the foundations for a new democratic South Africa”. The announcement by the Nobel committee stated that while South Africa had been the symbol of racially-conditioned suppression, Mandela’s and De Klerk’s constructive policy of peace and reconciliation pointed the way to the peaceful resolution of similar deep-rooted conflicts elsewhere in the world.

Honouring those who strive for a better world

The Nobel Peace Prize is one of six annual prizes given out in memory of Swedish scientist, inventor and pacifist Alfred Nobel. Winners are chosen in the subjects of peace, literature, physics, chemistry, economics and medicine, and must be people who “best benefit mankind through their actions”.

The Peace Prize winner for 2008 is former Finnish president Martti Ahtisaari, who was commended for his efforts, spanning several continents and more than three decades, to resolve international conflict. Ahtisaari’s efforts, said the Nobel committee, have contributed to a more peaceful world and to “fraternity between nations” in the true spirit of Alfred Nobel.

Ahtisaari is also the 2008 winner of both the Delta Prize for Global Understanding and the Unesco Félix Houphouët-Boigny Peace Prize. Nelson Mandela is a former recipient of both awards.

South Africa boasts Nobel laureates in other disciplines, such as authors Nadine Gordimer and John Maxwell Coetzee, who won the Literature Prize in 1991 and 2003, and physicians Sydney Brenner, Allan M. Cormack and Max Theiler, who won the prize for Medicine in 2002, 1979 and 1951.

The Nobel prize-giving event takes place in both Sweden and Norway in December, the month of founder Alfred Nobel’s death. During the first week of December all laureates – except those honoured with the Peace Prize – arrive in Stockholm, Sweden, to present their Nobel lectures and to prepare for the ceremony on 10 December. The Peace Prize laureate delivers their Nobel lecture at the ceremony held simultaneously in Oslo, Norway.

The prestigious event is held in two countries because Sweden and Norway were still one when the awards were instituted. National dress is acceptable in addition to white tie and tails or an evening gown.