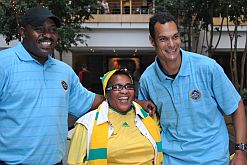 The campaign’s ambassadors Linda
Buthelezi and Andre Arendse with
a Nedbank employee. 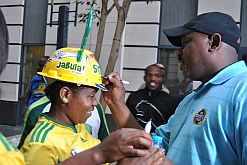 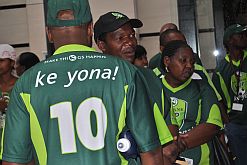 The Sports Trust Soccer Boots Drive, launched in Johannesburg’s Alexandra township in August 2009, will distribute the 20 000 pairs of boots to aspirant footballers at schools in the country’s disadvantaged areas.

“It’s the poor residential nodes that we looking at,” said Carol Crawford, the NGO’s marketing and communications manager. “We aim to give back to underprivileged children countrywide.”

At the 2009 launch, Kick 4 Change donated 250 pairs of boots to children living in Alexandra.  The campaign encourages the public to either donate a pair of new or old useable boots or an amount of R140 ($18.75) to buy a new pair.

Sports Trust has teamed up with a number of businesses and NGOs to raise the funds. Boots can also be dropped off at these partners’ premises, such as Nedbank, FedEx, Sportsman’s Warehouse, KickOff magazine and Safe Hands Soccer.

Former Bafana Bafana stalwarts Linda Buthelezi and Andre Arendse are the campaign’s ambassadors. Radio 2000, an SABC station, is a broadcast partner and has been highlighting the campaign, and urging its listeners to contribute.

“Wherever we take the campaign, Radio 2000 is there to spread the message,” said Dida Malulyck, Sports Trust’s project manager.

Commercial partners are encouraging their employees to donate. Nedbank, one of South Africa’s four big banks, hosted a beneficial event at its Sandton branch on 7 May. The achieved aim was to accumulate funds from donations and trading of the campaign’s merchandise.

Nedbank’s nationwide branches are also involved in indentifying schools that will benefit. “Nedbank will help us reach the poor areas that we need to benefit,” said Buthelezi.

Crawford says the impetus for the Sports Trust Soccer Boots Drive came from South Africa hosting the 2010 Fifa World Cup. “With the World Cup coming, we decided to have a big campaign,” she said.

“I got my boots when I was 16 years old and it changed my ability to play,” Buthelezi said. “From there I increased my skills.”

He went on play for local top teams such as Kaizer Chiefs as well as overseas, and was in the Bafana Bafana squad – South Africa’s national team – that won the 1996 Africa Cup of Nations.

Affectionately known as Mercedes Benz, Buthelezi emphasised the importance of a good pair of boots in developing football skills. “If you don’t have resources you are bound to take time to succeed,” he said. “The campaign is a good cause and we need support to reach most areas.”